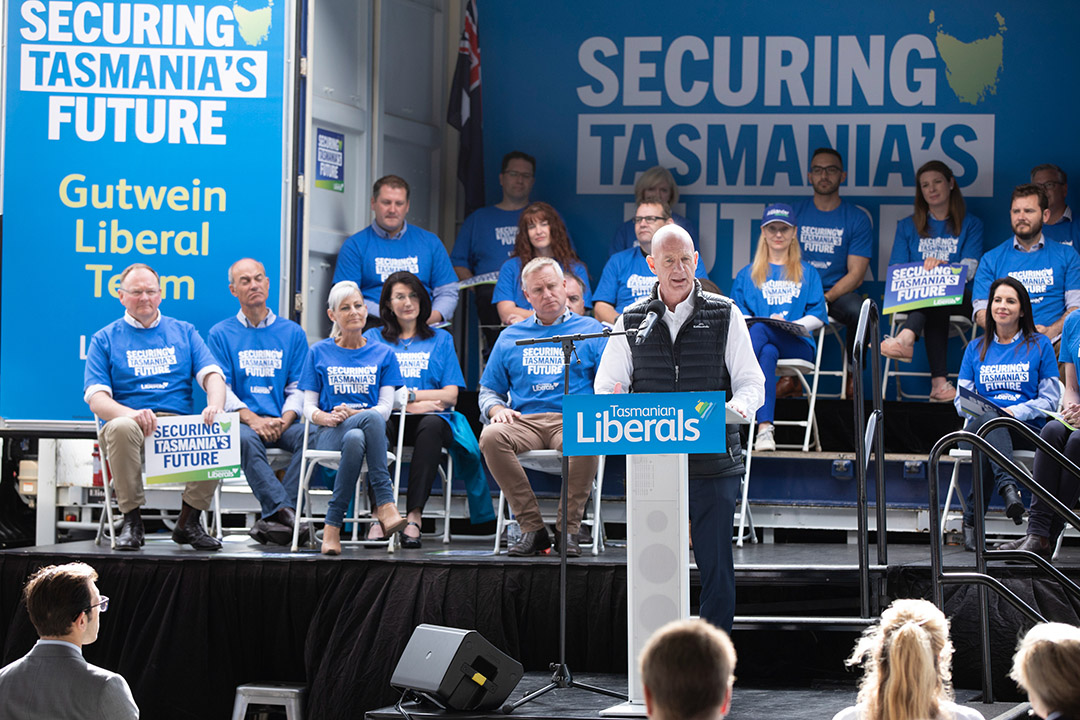 The Liberals won the Tasmanian election as predicted, but what will happen in the next Federal election?

At 7.30pm Wednesday 12 May the Tasmanian Electoral Commission confirmed the result of the general election held on Saturday 1 May. The Liberal Party won 13 seats, Labor 9, and the Greens 2. The 25th seat went to the Glenorchy mayor, the independent Kristie Johnston, one of the five female members for the Hobart-based Division of Clark. In the race for that 5th Clark seat Johnston polled 9,970 votes to 8,716 for the defeated independent Sue Hickey.

The other four Clark members are re-elected female incumbents, Elise Archer and Madeleine Ogilvie from the Liberal Party, Ella Haddad (Labor) and Cassy O’Connor, leader of the Greens. The upshot is that there will be another majority Liberal government as I predicted in my Switzer Daily article posted on Tuesday 13 April “How will the Tasmanian election play out?”. I wrote then that “Premier Peter Gutwein will have a good victory, better than that of Hodgman in 2018 but not as good as that of Hodgman in 2014.” Spot on!

Readers will think me boastful when I write this – but I am struck by how accurate my Switzer Daily election predictions have been over the past eighteen months. There have been occasional errors of detail from time to time – even as I correctly predicted the winner in every case.

I should apologise for congratulating myself. I should instead be congratulating Gutwein on his magnificent win. Once you allow for the difference in electoral systems Gutwein enjoyed a better win than that achieved by Queensland Labor Premier Annastacia Palaszczuk back in October. Yet even there I could not fail to notice that in his election-night claim to victory Gutwein described the Hare-Clark system as “brutal”.

Clearly, he thinks it a bad electoral system to be described as “brutal”. I profoundly disagree. Hare-Clark is properly democratic and competitive. That makes it brutal - which is what a democratic system should be! The rigged Senate voting system is the exact opposite. As I explain below it is a very, very safe prediction that almost every senator will survive at the forthcoming federal election. They will get cosy fixed six-year terms in a body properly described as “unrepresentative swill”.

In my article noted above I had a go at Gerard Henderson of The Weekend Australian who displayed his ignorance by describing Hare-Clark as “similar to that which prevails in Senate elections.” I now have a go at another Mainland ignoramus. Writing last weekend in The Saturday Paper in an article titled “Trickle down and out” Paul Bongiorno wrote: “The Liberal premier, Peter Gutwein, pulled off the equivalent of a landslide once you factor in the quirks of the Hare-Clark proportional voting system.” His basic idea is correct – but why the reference to “the quirks” of Hare-Clark when there are no quirks, merely democratic characteristics?

Although people often sneer at me for making predictions it is clear that most people read me because I do make predictions. Thus, it is true that one article of mine was the most read of all my articles this year as well as being one of the most widely read of all Switzer Daily articles this year. It was published on Wednesday 3 February and titled “When will the next Federal Election be and will ScoMo win?”.

I made fifteen predictions of which eleven are still on track, three have been proved correct and one has been proved wrong: “My prediction is that the Tasmanian House of Assembly will go to the polls on 19 March 2022.” However, the three attracting the most interest were that the federal election would be on 27 November 2021, that the Coalition would win 80 of the 151 seats in the House of Representatives and that, from 1 July 2022 there would be 37 Coalition senators, that being 48.7 per cent of a Senate of 76 members.

Lack of space prevents me from giving details on the first two. Let me repeat, however. While I admit that there are fourteen plausible federal election dates, I insist that 27 November 2021 is the single most likely day we’ll go to the polls. The second most likely is 5 March 2022. And while I admit that the Coalition number in the House of Representatives could be anywhere between 70 and 90 my insistence is that 80 is the single most likely number.

My prediction that the Coalition Senate number will be 37 carries with it a probability statement of 60 per cent. The system guarantees that the Coalition will win three of the six places in every state except Queensland. That includes a gain by the Liberal Party of one seat in South Australia from Stirling Griff of Centre Alliance. Therefore, whether the Coalition has 36 or 37 senators depends on Queensland.

Under this system which is so conspicuously lacking in brutality the only Liberal in danger of defeat is Senator Amanda Stoker. She was appointed in March 2018 to succeed George Brandis who resigned to become Australian High Commissioner in London. Let me explain briefly why I give her a 60 per cent chance of election.

The upshot is that there is a 40 per cent chance Stoker will be defeated. That would happen if Senator Hanson is re-elected, Senator Chisholm is re-elected and the Greens get a second Queensland Senate seat, a new boyfriend to give Senator Larissa Waters some company.