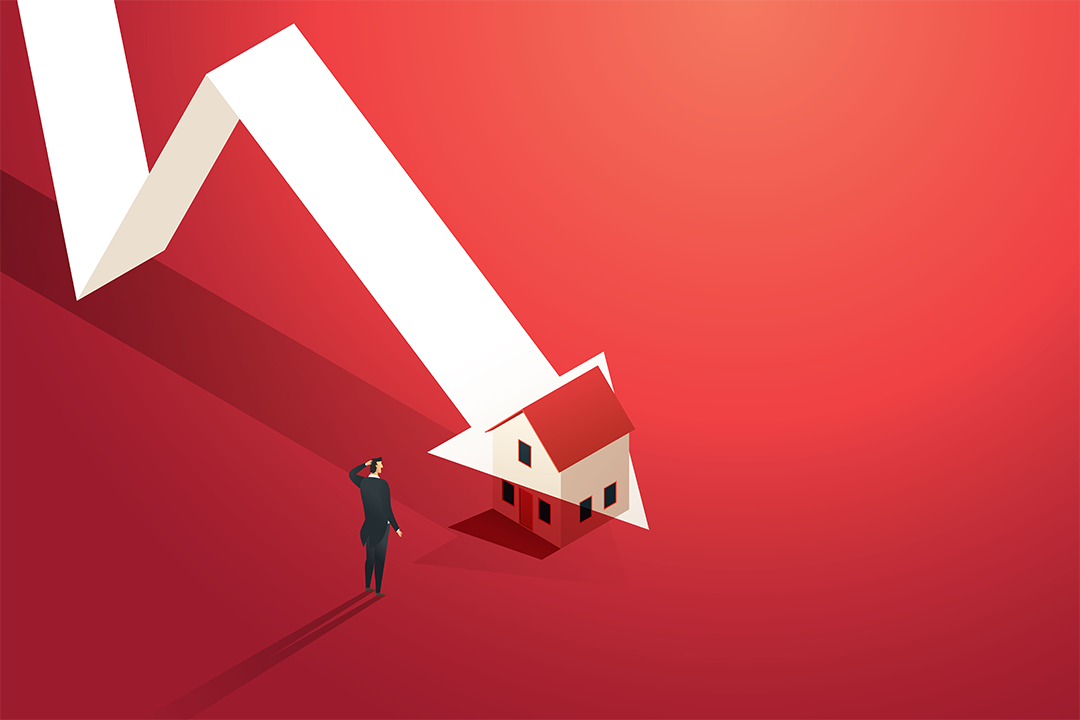 Property price slump leads to 30% of properties pulled from auction

Questions from friends and family are always early indicators of where markets are going, with the number one inquiry I’m getting right now being: “Do you reckon your mate Chris Joye is right about a 30% crash in home prices?” Of course, that’s followed up with: “How low can the stock market go?”

But we Aussies care more about house prices than share prices and our super. That has to change over time and it will, as more and more of us find it hard to buy a property, though for the year or so ahead, real estate will be a buyers’ market at last.

That said, I doubt if everyone can really think that the property they missed out on buying that sold for a million bucks last year will be $700,000 this year. Even though Chris Joye is smart, his 30% number is a guess driven by a pretty smart model of Australian property prices.

However, his model can look wrong if things change unexpectedly from the time when Chris’s team whacked data into it. For example, they might have factored in more interest rate rises than actually happen. Or the oil price might fall quicker than expected. Or China might get past its lockdown problems faster than expected. If these things happen, the supply chain problems pushing up inflation could be reversed, bringing inflation down faster than anticipated.

It's guesswork for Chris and me but ANZ’s property team which has a property price model too has a 20% fall in prices pencilled in. But again, they’re also guessing.

Also, a 30% fall nationally might mean some places see prices fall by 40%, while others only 15% because property markets aren’t the same across the county.

The SMH showed us today that the RBA’s scare campaign to stop us from spending and paying too high prices, which is fuelling inflation, is working by telling us that 30% of homes were withdrawn from auction last week in Sydney!

Why? They’re scared no one will show up and they’ll have to drastically chop the price of their home. While they will have to cut it, the old price they had in their head was inflated anyway by the unbelievable surge in what people paid for Sydney real estate in particular.

In case you need reminding, “Sydney’s median house price has lifted 55% in less than three years to $1.6 million. The median climbed almost $570,000 since the 2019 market low,” Domain.com.au data shows.

And while a 30% withdrawal of properties in one week seems like a big number, it’s early days. This is an overreaction to headlines such as ‘30% fall in house prices’ and talk of ‘another 0.5% interest rate rise from the RBA next week’.

Someone not in the “house prices will fall by 30%” scare team is property expert Louis Christopher, founder of SQM Research.

“There is still interest in selling via auction by vendors … [but] that interest in time may wane,” he said. “What you see in downturns is that vendors tend to pivot towards selling by private treaty. There is a perception that auctions do not work as well for vendors during downturns.”

The SMH cited a semi in Clovelly that sold for $3.04 million, which was $40,000 over the reserve. Selling has become harder than auctions over the past three years but that doesn’t mean it’s going to be Armageddon for everyone hoping to sell.

Buyers dodging an auction right now makes sense but if a lot of properties are withdrawn in coming months, those who brave it and try to sell might get a pleasant surprise, if they have a very attractive property.

And by the way, it’s not all bad news, with CoreLogic reporting Sydney’s clearance rate was actually up last week to 55.4% and for Melbourne (while seeing sales listings pulled down by 22.3%) the clearance rate was still a healthy 60%. Adelaide had 173 auction listings and scored the highest clearance rate of 68.8%, followed by Brisbane at 65.4% and Canberra at 62%.

The important point made from this SMH report came from Louis Christopher who said that the latest auction results showed the market was experiencing an “ongoing downturn, not an outright crash”.

The data coming out of property probably should get worse before it gets better, especially with the negative headlines I expect after next week’s rate rise from the RBA tipped to be 0.5% again. But if inflation readings over the next two months start to point to fewer interest rate rises than have been predicted, all of a sudden, buyer interest in properties will pick up and price falls in 2022 mightn’t be as scary as they currently sound.

I’ll be watching every local and foreign indicator that might influence the future of inflation and what that means for interest rates. As soon as I know, I’ll pass it on to you.

Top Spring Australia's Ode | Double Bay Penthouse sale shatters suburb's apartme...
The suburbs where Australia’s wealthiest reside
We have a housing crisis but how bad is it?
ScoMo’s betting the house on a super play
Would you want to own a house with the Government?