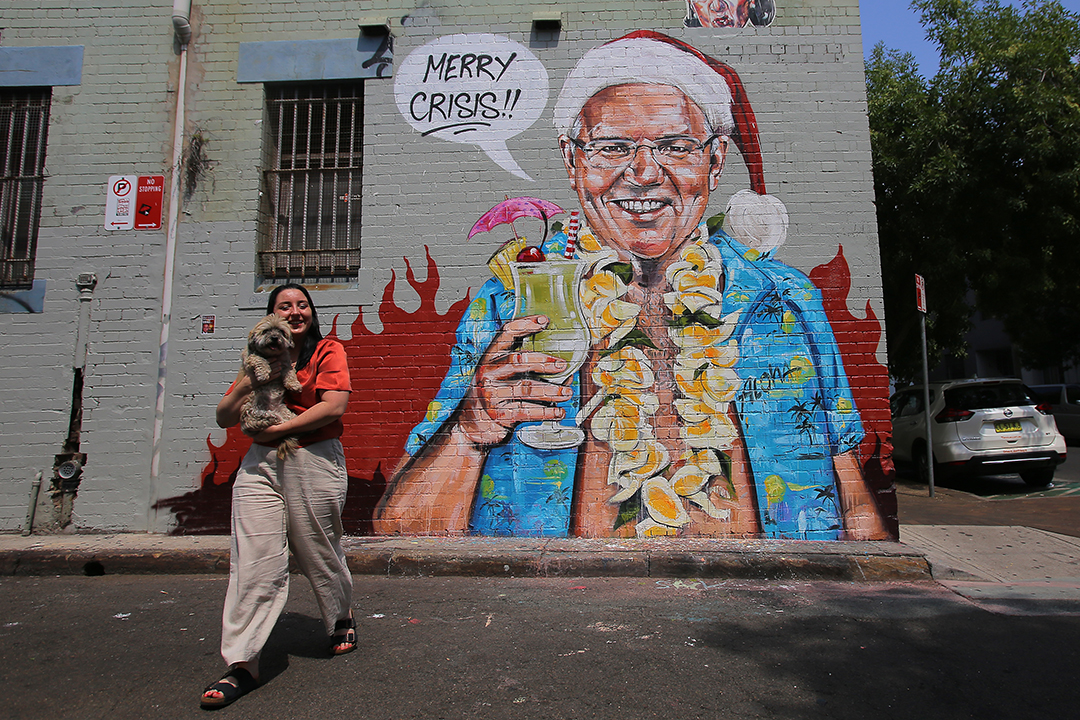 How does ScoMo play “kiss and make up”?

The latest madness from Canberra tells us that Barnaby Joyce, who wanted to spend more time with family last year, now seemingly has decided he doesn’t want to do that anymore, explaining why he ran for the leadership of the National Party this week. In case you missed it — he lost.

I don’t mind Barnaby but he has underlined how counterproductive politicians are to our economy, and life generally, by announcing there is a rebel group inside the Government who are annoyed that none of their mob got a ministry from the ruling boss of the Party — what’s his name? Oh yes, Michael McCormack. This guy is actually our Deputy Prime Minister, in case you didn’t know. That’s a useful fact if you’re ever given a run on Eddie McGuire’s Millionaire Hot Seat.

All up, this rebel group development is not good for a Government and PM who are on the nose. Labor leads ScoMo’s team 52% to 48% and ScoMo himself is on 38% as preferred Prime Minister, while Albo is on 43%.

Following the Hawaiian/bushfire roasting he has copped, he has two years to rebuild the nation’s love — and the chart below is the key. It is also the reason we should be happy that Bill Shorten was nobbled on May 18 by the voters of Australia!

Don’t get me wrong, I like Bill, which puts me at odds with many of my mates. However, I didn’t like his policies ahead of the election. My opposition to his franking credits policy and how it hit retirees is well known, but I also often referred to his anti-business stance, which I thought was ill-timed given the slowness of the economy. They were ill-conceived considering how important business investment is to creating jobs and, ultimately, bankrolling wage rises for the kinds of people Bill was out to help.

The chart’s orange line shows governments have been slack in pumping in good investments to the economy since the 1970s. But they went madly ‘tightwadish’ from around the mid-1980s. This is when Bob Hawke and Paul Keating started to get out of the big Budget Deficits game. They wanted to fix up the public books and after the “recession we had to have” state governments did the same thing.

The theory was that government was crowding out private business, demanding too much money, driving up interest rates and stifling the private sector’s contribution to economic growth and job creation. As governments stopped investing in stuff like roads, bridges and airports — remember they first started promising the Badgery’s Creek airport in the 1970s! — the private sector increased its business investment from 1995 to 2012 and it has been downhill since!

Going back to the chart, see how business investment fell with the GFC, but public investment spiked as Labor tried to rescue us from the GFC? Then the private sector kicked in. After that, the private sector turned tail and ran, and it coincided with the hung parliament of Julia Gillard and Kevin Rudd, and didn’t improve under Tony Abbott and Malcolm Turnbull. I speculate that the revolving door of Prime Ministers, the dysfunctional Senate that said no to many pro-business policies and, of course, the end of the mining boom, KO’d business investment.

It was a case of second-rate politics not helping a troubled economy that had thrived on a mining boom. I know it is hard for politicians to understand how an economy works, as many of them have not been ‘schooled’ in the real world, where businesses have to make profit to employ people. But the fact that we were struggling with the end of the mining boom was the exact reason why our politicians should have been working together to help the economy.

And the same applies now.

Alas, we as a team of voters assembled a motley crew and we paid the price. I suspect the rejecting of Bill and the support for ScoMo was us collectively getting real. So it adds to the disappointment when you admit that ScoMo has started his new term with a shocker.

So how does he kiss us and make up? Well, he can’t stop leftie media commentators who are still overwhelmed over how we voted on May 18, but he can win us back by getting the economy right and putting the policies in place to get the economy growing stronger again. That could change the minds of a lot of voters who are currently stuck on his bushfire performance.

Have a look at my second chart, which shows you how America’s business sector has invested since 2010, and you can see it has been on a rising trend from around 17% of GDP to 21%. It has tailed off lately and that’s the trade war worry effect. As the trade war concerns dissipate and the US election is settled in November, I bet business investment recovers.

Now go back to the first chart and note how our business investment went from a tick over 10% to around 17% between 1993 and 2012. Then it plummeted to about 11%! Sure, you can blame business but I blame dumb, self-serving politicians as well. You see the end of the mining boom was the big killer of investment, but that was when we needed great political leadership, pro-business policies and even wise government spending on projects that not only would have helped economic growth, but would have encouraged investment from business.

Interestingly, when you look at the election of Tony Abbott and Malcolm Turnbull through the next chart, you’ll see business wanted a fearless leader and their winning of the top job boosted confidence. However, this positivity went nowhere, and we have to see the leaders on both sides of our Parliament and the teams they hung out with, as the culprits in this serious economic crime!

The big spike just before 2014 was when Tony Abbott became PM. The next one was just before 2016 was when Malcolm Turnbull replaced Abbott in a Parliamentary coup. However, in both cases, the confidence spike went nowhere.

I think it’s high time that our politicians helped business confidence and the economy in a sustained way, and it has to start with leadership strength from both the PM and Treasurer. Dumb politicians need to be named-and-shamed for the sake of the economy and country.

Scott and Josh have to channel Hawke and Keating, as well as Howard and Costello, to get business positive and excited to invest or we will remain in this economic funk for a hell of a lot longer.