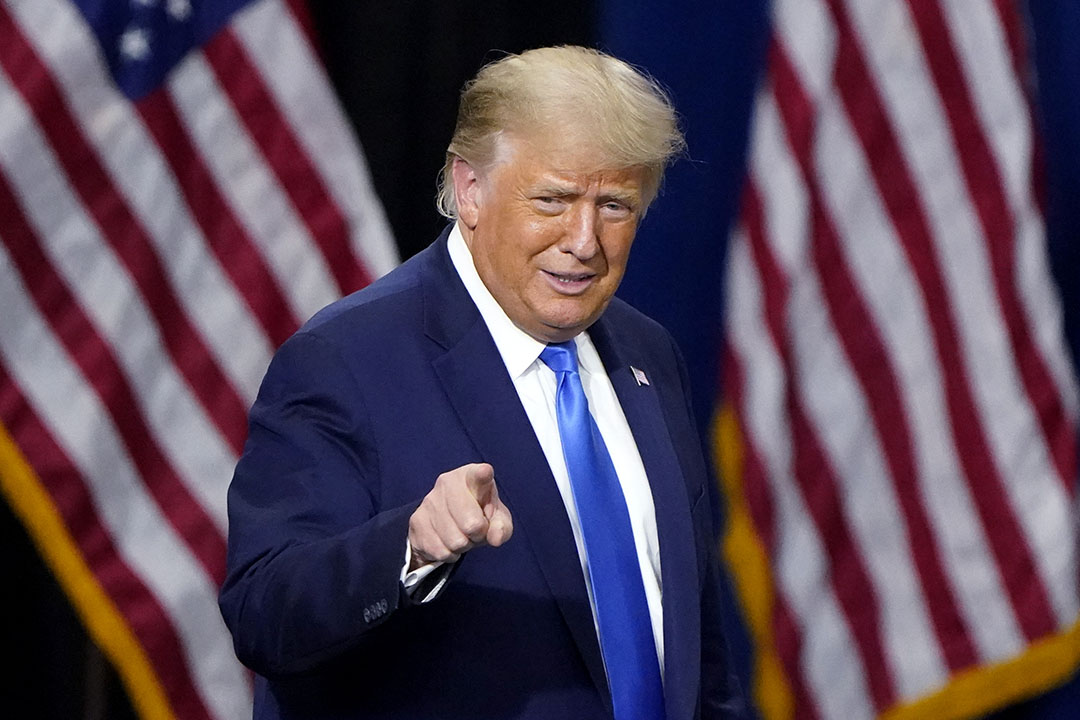 And the winner is…Donald Trump! Really?

For those of you who aren’t Donald Trump fans, I hope this won’t ruin your Saturday morning croissant or smashed avocado. Expert ‘scientific’ analysis suggests that Donald Trump has a 90% chance of winning the US Presidential election on November 3!

This at odds with my Switzer Daily colleague, Malcolm Mackerras, who argues the Trump goose is cooked.

In contrast, this surprising “Trump should win” calculation, defies the polls that say Joe Biden is a shoo-in to become the 46th President of the USA.

Those charts (courtesy of ig.ft.com) paint a bleak picture for Donald and anyone who has been looking at the second-wave infection rates in the US wouldn’t be surprised that his poll ratings stink!

That said, The Financial Times reporter did make this interesting observation: “With two months to go before the US presidential election, former vice-president Joe Biden, the Democratic party’s nominee, is polling ahead of incumbent Republican president Donald Trump in key battleground states, though he has seen his lead narrow in some states since the summer.”

For non-analysts, Trump could surprise but it looks like a remote chance. He should be a long shot — a 100/1 shot or 1% chance to win again with his Coronavirus crisis. But one very reliable expert says he has a 90% chance of winning!

Clearly, I need to explain.

Michael Knox, chief economist at stockbroking firm, Morgans, is a fanatical watcher of everything American. I suspect he is a ‘Yankafile’ but given Wall Street drives our stock market, and his company is in the share business, it makes sense that he continually monitors the pulse of the world’s most important economy and its related stock market. “In an article published on the Brookings Institution website on 15th September 2016, Thomas E Mann surveyed the model driven forecasts for the US Presidential election of November 2016,” Knox recently wrote to in a note to his clients. “He said with cunning foresight, ‘a Trump victory may be unimaginable to many, but it is not impossible’. He asked the question, ‘can we forecast the outcome for that election based on methods and models developed for past elections?’ There were two models in which the authors correctly forecast a Trump victory.”

Now Knoxy has a great brain but he can rave on. One night on my Sky News Business TV program his answer was so long I had to say the following to make sure he hadn’t sent some of my viewers to sleep or had made them reach for the remote: “Knoxy, I could listen to you all day, and for a moment then I thought I was going to have to!”

So being mindful that this is the weekend, I will put a lot of Knoxy’s research and analysis into points. So, here goes:

“The same effects of economic growth and the incumbency that Fair observes in US Presidential elections seem to apply in varying degrees to the Australian Federal and State elections,” he revealed. “On this occasion, we thought that we would look at the underlying data and produce our own estimate on who might be successful in the Presidential election of 2020.”

Using a variety of economic indicators, which I won’t bore you with here, the Knox model worked its way towards a conclusion on who might win the 59th US election and then the question was asked: “Is there an organisation which produces a single judgement on what all these components might mean for the US economy?”

And the answer was the Federal Reserve. When it decides on interest rates, it looks at all the important economic variables that could affect a voter in a polling booth. Out of this came his model, which he crows has proven “…to our surprise,…to be the model with the highest explanatory power.”

(In case you don’t understand the mysterious ways of economists, they can create a model that might predict what economies or stock markets might do and they back-test it to see if they would’ve been right if the model was in existence some years ago.)

I will spare you the boring bits Knoxy throws out there for his more numerate fans, but his models says “that an incumbent gains a swing of 5.15% of the popular vote, when that President stands for re-election after his first term.” And so on.

“Our model supports Helmut Norpoth’s view that Trump will be re-elected,” Knox proclaims. “It is also consistent with the forecast of Ray Fair’s own model, up to the beginning of 2020.”

But what does history suggest? The last US election to be held after a pandemic was the 1920 poll where Democrat Woodrow Wilson retired after two terms and there was a landslide victory for the Republican Warren G. Harding. The war was over and getting back to normalcy were the big issues. The Spanish Flu claimed the lives of 675,000 Americans between1918-20 and had to have played a role in the result.

That 10 times difference might help Trump but the Spanish flu didn’t close the US economy down and unemployment was 5.2%, compared to 8.4% now but it was 14.7% in April. If Trump can win, he’s a political genius/Houdini and Michael Knox and Helmut Norpoth are election forecasting Einsteins!

And while we are in a right-wing frame of mind, check out my podcast with Peta Credlin this week. Her admissions and her self-analysis might substantially surprise you. It surprised me!