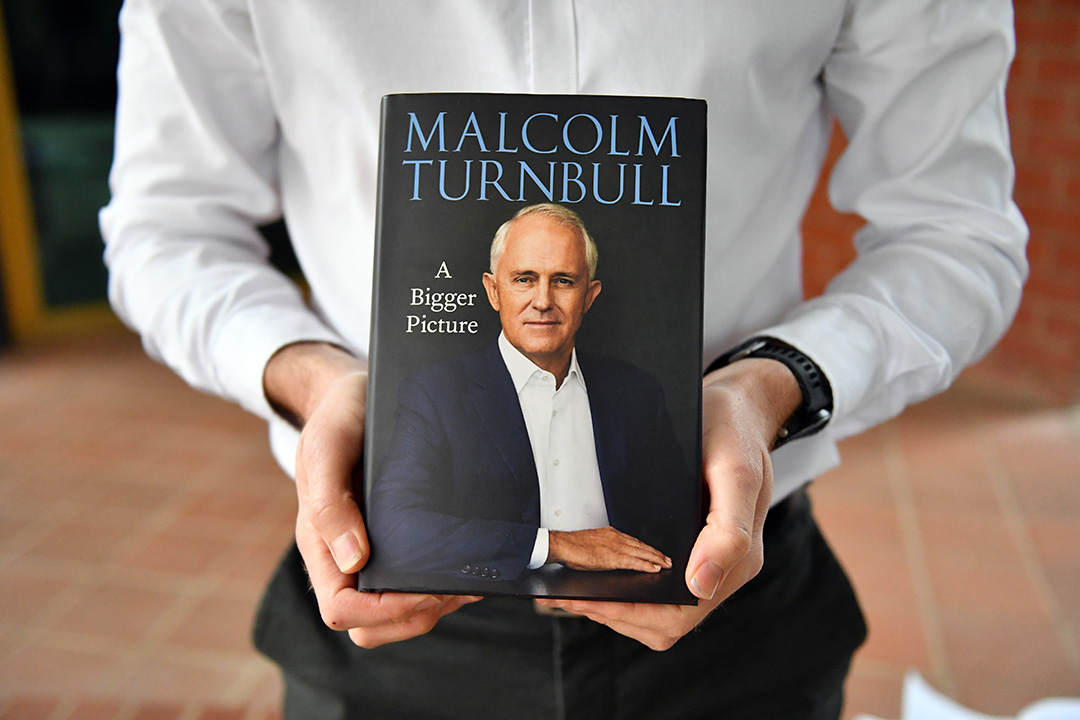 A Bigger Picture: My review of Malcolm Turnbull’s autobiography

Readers of my Switzer articles will get from me two detailed analyses of the Eden-Monaro by-election, the first when nominations have just closed, the second after polling day. In the meantime, I make my prediction: as ever the laws of electoral history will prevail. The new member will be Labor’s Kristy McBain, currently mayor of Bega Valley shire. Had he stood I think Giovanni Dominic Barilaro could have won. More on him in my next article.

My wife sent off to the publisher of Malcolm Turnbull’s autobiography, A Bigger Picture, to get an early copy. On sale in bookshops on Monday 27 April, mine arrived on Thursday 30 April – and I have been reading it since. So, what do I think of it?

First, I want to distinguish between the book and my view of Turnbull as Prime Minister. To accompany my article here of 23 May 2019 “Will history view Morrison as a great PM?” I had a table of our 30 Prime Ministers ranked in order of greatness as judged by me. Of the past four post-Howard Prime Ministers, I had Julia Gillard at number 17 and described as “High average”, but Kevin Rudd (18th), Turnbull (19th) and Tony Abbott (20th) are described as “Low average”. The book does not change my mind on that. Nor does it change my view that the Liberal Party in September 2015 made the right decision to replace Abbott by Turnbull and in August 2018 again made the right decision to replace Turnbull by Morrison.

While he was PM, people would ask me whether I was disappointed by Turnbull. My reply was to quote my mother’s dictum: “He who expecteth little shall not be disappointed.” I said the same about Abbott during his term, likewise with Rudd.

In respect of my view that the Liberal Party made the right decision to replace Turnbull with Morrison I say that as a man who is wise after the event. I admit posting this article on Switzer on 25 October 2018 “’Keep Turnbull’ I told them”.

I found Turnbull’s book very interesting to read and useful for me in my own writings. In my opinion it is the best of the post-prime ministerial autobiographies.

There have been many reviews very critical of Turnbull’s prime ministership and the reviewers take their dislike of Turnbull out on the book. I don’t intend to do that – but I make minor criticisms, none-the-less.

There is an observation he makes in the chapter “Diplomacy, disloyalty and turning the corner on debt”. It should be recorded for historians: “The deepest animosity was between Cormann and Dutton, on the one hand, and Julie Bishop and George Brandis on the other.” That tells me something I always knew to be the case. In the cabinet his greatest supporter was Brandis, the second greatest Bishop.

Here, then, is my first criticism of the book. Turnbull cannot resist making a clever put down of every person of significance. For example, it is recorded on page 649 that Brandis had written him “a very warm and wise letter a few days after the coup.” Then on page 650 he reproduces the whole letter – and it is very constructive critical of Turnbull beginning with: “Your fatal mistake was, of course, to trust Dutton.”

However, Brandis followed that with this: “If I may say so, I, and others, warned you many times that he was stalking you. . .” Turnbull’s comment on that is to write: “George’s criticism has considerable merit although I don’t recall his warning me about Dutton ‘many times’. It never occurred to me that Dutton, let alone anyone else, would consider himself a viable candidate for leader or that we’d do better with him at the helm.” My criticism is not that I disagree with Turnbull. It is that he should not dispute with his best friend about the number of times the warning was given.

My other criticism of the book relates to the index. Two members of my family are mentioned favourably in the book, my elder brother Alastair on pages 17, 18 and 20 and yours truly on page 304. He is recorded in the index, but I am not. So, I counted the number of people mentioned in the book but not in the index and there are 28 such people.

To have my family mentioned favourably in the book certainly disposes me well towards the book and its author. However, that is not the reason for my good disposition. It is that I am writing a book myself and I found his chapter “The element of surprise: proroguing the parliament” very useful. Certain omissions from it make it spin but that does not diminish its value to me. I have no doubt that there will be plenty of other political historians who find this book a valuable reference to keep in the library. (Malcolm Mackerras is Honorary Fellow of Australian Catholic University. malcolm.mackerras@acu.edu.au)