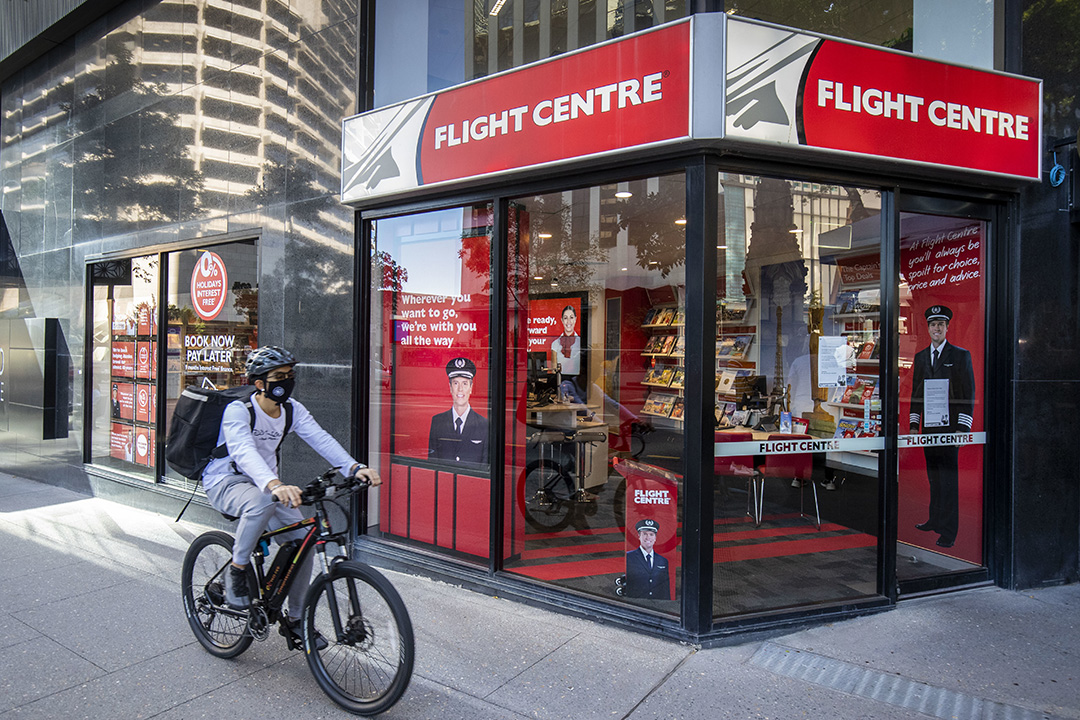 In hindsight, the sector’s woes were brewing even before the Wuhan pestilence was heard of, with the British-based packaged holiday veteran Thomas Cook collapsing in September last year.

In the pre coronavirus interim results from Flight Centre (FLT) in early February, normally ebullient  chief Graham Turner described the period as the worst since the Global Financial Crisis.

The cited headwinds show how much changed in a matter of weeks: Brexit (remember?), trade wars, Hong Kong tensions and unrest in the Dominican Republic which affected US leisure travel.

Given the state of the global travel sector, it’s hard to get excited about the immediate prospects for the ASX-listed travel intermediaries.

We certainly can’t get excited about the airlines themselves, even after the turbines of their grounded fleets start spinning again.

Then again, even the most distressed stocks have their price and investors punting strongly on some semblance of normality returning for the likes of Flight Centre, Helloworld (HLO), Webjet (WEB) and Corporate Travel Management (CTD).

One reassuring aspect in a sea of discomfort is that none of these operators is likely to go broke. In early April, Webjet wasted no time in raising $346 million in a placement and rights issue, while a fast-following Flight Centre upped the ante by corralling $700m.

Over at Helloworld, which is 15% owned by Qantas, management says it won’t need to follow suit.

In an update on May 7, Corporate Travel Management said its creditors had waived covenants on a £100m ($188m) facility, albeit reduced from £125m.

The company also has $30m of cash and no need to use the begging bowl.

Not surprisingly, the agents have moved to staunch discretionary costs, mainly by retrenching swathes of staff (the JobKeeper program has helped though).

Flight Centre has also closed half of its bricks-and-mortar centres, which goes to show how it won’t be “business as usual” when unfettered travel returns.

Corporate Travel Management has reduced its monthly costs from $26-27m a month to $10-12m.

With most borders closed to all but essential movements, revenues predictably have slumped but in some cases we’re surprised about the level of residual activity.

Flight Centre reported that March activity (as measured by total transaction value, or the value of the ticketing) was 20-30% of normal levels.

In the month of April, Flight Centre’s turnover had reduced to 5-10% of normal levels, derived from a handful of other countries (including China) that aren’t locked down.

Corporate Travel Management has been doing 10-15% of its normal business, thanks to ‘essential’ clients such as government agencies.

Webjet “anticipates that any revenue in the near term will be nominal only, until the situation improves and travel activity resumes.”

Helloworld expects revenue to remain at “around 5% of previous levels, at least until September.”

The current game is all about maintaining a brand presence while reducing cash burn to as little as possible ahead of lifted restrictions.

Planning revolves around a staged return of domestic travel once border restrictions are lifted, with the New Zealand route included as a nod to the ANZAC spirit.

The vaunted trans-Tasman hygiene bubble aside, overseas travel will be the last activity to return given the airlines’ role in intercontinental germ transmission.

The pollies have been coy about enunciating timetables.

But as of May 1, Helloworld expected domestic travel to return in September and the trans-Tasman to revive in October.

The smallest listed player by some margin, Helloworld doesn’t expect overseas travel to return in earnest until next year, adding that a full return depends on a vaccine or drug being developed.

Despite the tabloid headlines about miracle cures, that’s a big “if”.

In the short term, the agents with a relatively high exposure to domestic travel look the best placed.

The owner of brands such as Viva Holidays and Magellan Travel, Helloworld derived 80% of its December half revenue ($200m) from Australia. But this would not all relate to domestic travel.

The same proviso applies to Flight Centre, which derived just over 50% of its record half-year ticket revenue of $12.4bn from Australia and NZ.

In short, buying the travel stocks now is a classic case of punting on a severely afflicted industry that offers little immediate hope of a rebound, but with the beaten-down shares offering intrinsic value.

At the depths of the market’s plunge – or what we presume to be the nadir in the absence of a double-dip sell off – the listed agents had lost between 83% and 70% of their value (Helloworld fared worst, Corporate Travel the best).

Given Flight Centre’s sector-leading status, all eyes are on Graham Turner’s outfit that is valued at close to $2bn but at one stage was worth more than $10bn.

In a sector in which value derives from brands rather than tangible assets, the company’s now abandoned hard-ball stance on charging refund fees will stick in the craw of stymied travelers.

As for Corporate Travel, broker RBS believes the $1.3bn market cap factors in most of the optimism about domestic travel returning.

Despite the lure of cheap fares, we doubt that most leisure travellers will stray too far, given the prospect of a fresh outbreak and the prospect of being marooned in some infected hellhole.

As for businesses, how many assignments really need days of travel when the matter can be settled via an hour on Zoom, Viber and Skype?

There’s nothing like the personal touch, but not when the bean counters have latched on to the savings.

At the height of the rout, the shares in the trans Tasman travel software mob were close to 80% off their January record peak, but the behind-the scenes operator seems to be coping with hibernation reasonably well.

A provider of cloud-based booking and management software to 6000 corporates and travel agents, Serko was on a roll leading up to its March balance date full-year results.

Since the proverbial hit the fan in late February, Serko has used the lull to hone its IT and reduce operating costs to no more than $2 million a month.

Crucially, Serko has $42 million in the bank and no debt.

The results were due for release this month but have been delayed given the “unprecedented economic situation” –which is one way of putting it.

Men to get 20 weeks parental leave?
Volatile market sees strongest buying in financials
Who should the ACCC protect: you, the consumer or farmers and small businesses?
You can still invest in infrastructure – here’s how
RBA boss pleads for controlled wage rises, or else!