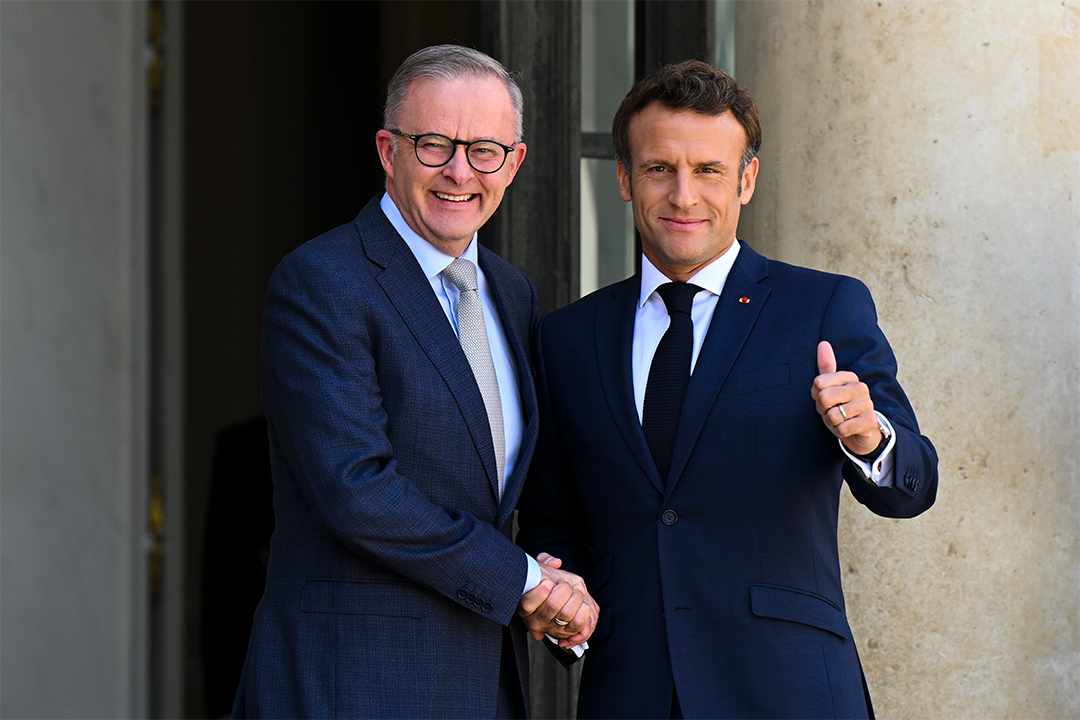 1. French government aren’t done with Australian submarine deal, makes further bid
According to the AFR this morning: “French President Emmanuel Macron proposed to Anthony Albanese that four conventionally powered submarines be built in France for the Australian navy to avoid a capability gap created by the AUKUS deal to acquire nuclear-powered boats.”

“The Australian Financial Review has been told Mr Macron’s pitch was that the five years of preliminary design work that had gone into Australia’s planned Attack class submarine had made it the most advanced diesel-electric submarine in the world.”

No comment has been issued by Mr Albanese’s office on the matter.

2. Iron ore, coal and LNG continue to break trade surplus records
Due to skyrocketing prices in all three resources, they have contributed to a fifth-straight month of record exports at $55 billion and a second consecutive record-breaking trade surplus at $17.6 billion in June.

“Together, iron ore, coal and LNG accounted for a record 70 per cent of the total value of goods and services exported in the month, up from just under 50 per cent in June 2021, and just above 30 per cent June 2020,” the AFR reports.

“Australia’s golden run of trade windfalls has been underpinned by sales of coal, iron ore and LNG,” ANZ head of Australian economics David Plank said, but warned of clouds on the horizon, particularly over China.

“Our biggest buyer, China, has been trying to limit reliance on coal imports, and its steel output is expected to weaken this year,” he said, adding with spot prices looking to have peaked, the surplus could soon slide.

3. Bleak outlook for certain industries in the face of automation
Finance brokers are at the top of the list of workers at risk of being replaced by automation in the near future, with some 50,000 accountants potentially out of a job within a decade, according to new research by data and analytics firm Faethm by Pearson.

Other at-risk jobs include pilots (37% risk of automation), human resources advisers (34%), retail pharmacists (33%), meteorologists and accountants (both 29 per cent), insurance brokers (25%), and statisticians (24%).

“We can determine what jobs are really at risk of automation ... and the big thing is anything to do with routine tasks,” Faethm by Pearson’s chief data scientist, Richard George, told the AFR.

“If you’re sitting in an office pushing text around on a Word document, or entering data in an Excel spreadsheet, this is a job that’s already being highly automated. If you’re still doing that – these things will disappear quickly.”

4. Citi issues Qantas a ‘Sell’ rating
Leading broker analysts Citi are telling clients to sell the leading airline’s stock, lowering its target price by nearly 20%, arguing that the company will have to wind back staff cuts and limit capacity to solve its operational issues. (AFR)

Analyst Samuel Seow expected Qantas to improve, but this would “likely come at a cost of higher staffing levels and lower capacity”.

“Overall, we expect in a relatively tight labour market, available staff should
theoretically be harder to find. As a result, to increase performance we expect QAN will more likely cut capacity,” Mr Seow said.

“Additionally, if we assume performance issues have resulted from staff and
infrastructure being at capacity, then logically a more muted if not flat [second quarter] should be expected as opposed to growth.”