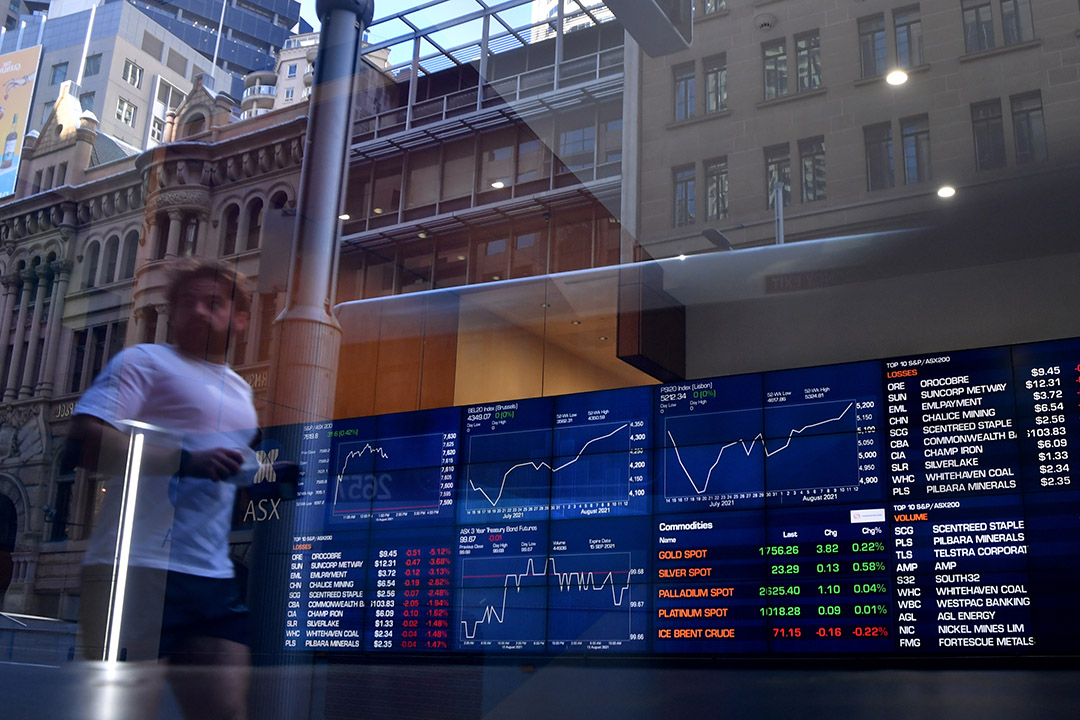 Global share markets continued to rise over the last week, with reopening and earnings optimism offsetting Delta concerns and propelling US and European shares to record highs. US shares rose 0.7%, Eurozone shares gained 1.3%, Japanese shares rose 0.6% and Chinese shares rose 0.5%. The Australian share market also rose 1.2% to a new high on the back of good earnings news offsetting ongoing dismal news on lockdowns. Bond yields fell in the US and Europe but rose slightly in Australia. Oil and metal prices rose but iron ore continued to slide and is now down -26% from its May high, but is just back to April levels which is still very high. The $A rose slightly as the $US fell.

So how can Australian shares be at record highs given the hit to the economy from the lockdowns? While it may seem perplexing there are good reasons behind it: earnings news has been strong with investors cheering the return of capital via dividends and buybacks from several companies; last years’ experience showed that the economy will bounce back strongly helped by massive fiscal support; monetary policy may now be easier for longer; lower bond yields and the surge in earnings have made shares cheaper; some are expecting more M&A activity; and vaccines are providing optimism that we will see a more sustained recovery from later this year; and of course global shares have also been strong supported by some of the same things. While shares are at risk of a short-term correction, we ultimately see the rising trend continuing.

The wave of new coronavirus cases globally is continuing to build.

Lowly vaccinated countries continue to respond with restrictions. China is seeing the toughest restrictions in some provinces since early last year – and they seem to be working in Nanjing where the outbreak started. But we are also seeing the return of more mask mandates & vaccination requirements (to go to work, enter venues, etc) in Europe and the US.

The good news is that vaccines are continuing to work – less so in preventing infection and onward transmission but particularly so in preventing hospitalisation and death (although death can still happen as we unfortunately saw in NSW in the last week). This is evident in deaths in developed countries remaining far more subdued compared to new cases in this wave thanks to higher levels of vaccination.

While the US has seen a surge in hospitalisations putting a strain on its medical system this remains mainly in lowly vaccinated states. The lowest 25% of US states by vaccination are seeing 3 times the number of new cases per capita, 4 times the number of hospitalisations and 7 times the number of deaths compared to the top quartile of states by vaccination. For example, Mississippi is the least vaccinated state and it reported record new cases (of 5023), hospitalisations and ICU patients on Friday. The US highlights the risk of easing restrictions too quickly if there is still a significant portion of the population who are unvaccinated (say 50%) who remain highly vulnerable to getting sick from coronavirus and needing to go to hospital – which is a risk NSW and Australia will need to consider.

The UK has continued to see hospitalisations and deaths remain low relative to new cases. And it’s the same in Europe. A caution is that new cases may be starting to hook up again in the UK and Europe. But with vaccines working there appears to be little support for new lockdowns in Europe, the UK and US unless it’s as a last resort. Rather the path ahead is focussed on increasing vaccination rates and with masks and distancing restrictions at most.

The main risk would be if a new variant evolved that could get around the defences provided by current vaccines in relation to serious illness. The WHO lists several variants of interest and the Lambda variant (which originated in Peru late last year) has attracted some concern. Its early days but so far it appears that current vaccines remain protective against it. But the risk is significant. The only option is to rapidly vaccinate the whole world to control the spread of coronavirus and prevent further mutations.

Australia’s vaccination rate is rising rapidly, reaching 1.48 million doses over the last week or 0.8% of the population each day reflecting increased vaccine supply and a sharp fall in hesitancy (with only 7% of Australians now saying they are not planning to get vaccinated according to a Commonwealth Government survey). And this is likely to speed up even more with vaccine supply set to ramp up further (including now 10 million Moderna doses by year end). At the current rate of vaccination, the national objective of 70% of adults being vaccinated (to be able to start transitioning away from lockdowns) should be met by mid-October with 80% of adults (which is the trigger for further reopening) by early-November. 80% of the whole population being vaccinated - which is what ultimately may be needed to live safely with coronavirus and variants like Delta - could now be met in December, although this may require a bit of carrot and stick. Restrictions on what the unvaccinated can do appear to be on the way in Australia – in fact NSW has already applied it to the building industry.

Unfortunately, the lockdown news in Australia remains bleak – with new cases still on the rise in NSW, the ACT now in lockdown, an extension to Victoria’s lockdown and various regional lockdowns in NSW. At least the Queensland lockdown ended and other states remain “free”.

Will New South Wales be free?

NSW is easily on track to reach the Premier’s target of a total of 6 million vaccinations by the end of August (from currently 4.8m) – but it’s doubtful that will be enough to safely allow much of an easing of restrictions unless new cases suddenly start falling rapidly. In fact, the trend in cases points to the lockdown being extended through September. There are basically three options facing NSW – ending the lockdown and letting it rip; continuing with the current lockdown and hoping cases fall or if not until vaccine targets are met in October and November; and tightening the lockdown (with eg a ring of steel around Sydney, a state wide lockdown and a curfew). The first would be unacceptable as it would overwhelm the medical system and threaten other states; the second could end up costing the NSW economy another $8bn or more; and the third may ultimately be the cheapest economically and the safest in that it should turn case numbers down earlier and so allow an earlier easing of the lockdown. It’s a tough one though!

The economic impact of the lockdowns is evident in a further fall in our Australian Economic Activity Tracker. After a brief bounce reflecting the ending of the Victorian and SA lockdowns it has since fallen again reflecting the return to lockdown in Victoria.

We now estimate that the lockdowns since late May are costing around $17bn – with NSW at around $9bn assuming it ends at the end of this month which is looking unlikely and Victoria’s three lockdowns at nearly $5bn. Last week we revised down our September quarter GDP growth forecast to -2.5% quarter on quarter and growth through this year down to 2.5% year on year, but this is already looking optimistic. This could see unemployment spike back up to 5.5% in the months ahead, mainly driven by NSW. However, we remain of the view that growth is likely to start recovering through the December quarter as lockdowns ultimately suppress cases but more sustainably as rapidly rising vaccination rates allow a transition away from using lockdowns and as pent up demand supported by government pandemic support payments is unleashed. We expect GDP growth through next year to be well above 4%.

Our US Economic Activity Tracker dipped over the last week with the Delta outbreak weighing on mobility, restaurant and hotel bookings. Our European Tracker edged up and remains strong but Delta concerns also seems to be constraining it.

More US Government spending looks likely but there is now an increasing risk of a debt ceiling showdown. President Biden’s agenda took a big step forward with the US Senate passing a $US550bn package of new infrastructure spending with a bi-partisan 69-30 vote and US Senate Democrats passing a new budget through the reconciliation process (ie with a simple majority) that allows for (but does not yet legislate) the remaining $US3.5trn of Biden’s American Families and Jobs plans. For shares this all looks good – more spending on long needed infrastructure is great for productivity and it all keeps the spending going. But there are now a lot of balls in the air and several qualifications. First, with the mid-terms next year this is likely the last big spending initiatives until maybe 2025. Second, both involve spending spread over 8 years or so which means the huge stimulus is behind us and next year will (in the absence of a new crisis) see a big step down in stimulus equal to around 9% of GDP. Second, the reconciliation bill is planned to see tax hikes (on high income earners, corporates, capital gains and dividends) which shares won’t worry about till they happen. Third, Senate Democrats did not include an increase in the debt ceiling which means they don’t have the votes on their own to raise it and pass $3.5trn of spending (and tax hikes) at the same time. Two Democrat senators (Joe Manchin and Kyrsten Sinema) have already said they will not support it and the Republicans won’t. Which means the $US3.5trn in spending and tax hikes will likely have to be watered down to get the votes for it and the debt ceiling increase. Either with just Democrats as a reconciliation bill or with some Republicans. In the meantime, it may make sense for Nancy Pelosi to allow a House vote on the bi-partisan infrastructure bill on the grounds that a bird in the hand is worth two in the bush. Finally, the experience last decade tells us that debt ceiling showdowns can go down to the wire (it was reached early this month but Treasury can hang on till maybe October) but at the end of the day neither side can afford to be blamed for the Government defaulting on its debt and payments so a deal will be reached. But markets may get nervous along the way at some point (as we saw in 2011 and 2013).

Time for some really happy songs

Time for some really happy songs. Here are some of my favourites. Walking On Sunshine  by Katrina and the Waves is hard to pass up (yeah yeah, I gave it a mention last year). And it may seem a ways off right now…but The Only Way Is Up by Yazz and The Plastic Population is another good one. Plus I always love a bit of bubble gum pop so here is Happy Together.