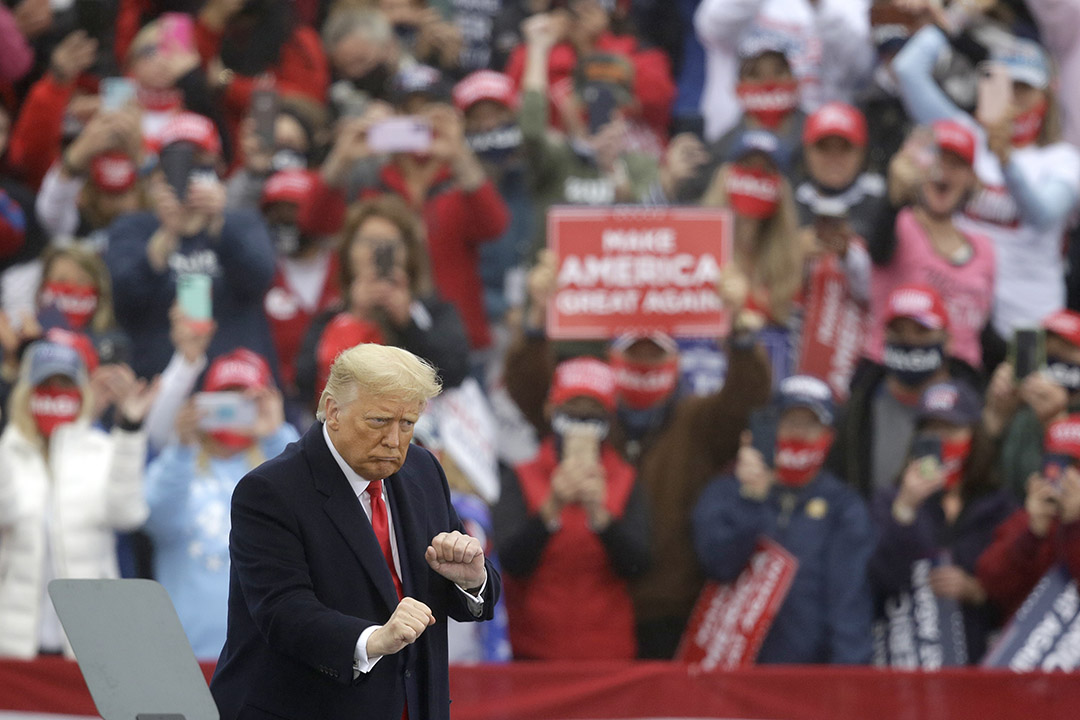 Will Americans do the Trump warp again?

As the US election looms, Donald Trump’s closest allies in Wall Street look like they’re losing faith in one of the most pro-business US Presidents ever. And it comes as there is a long-held fear that a future President Biden will raise taxes and bring in regulations that could hit big tech stocks like the FAANGs — Facebook, Amazon, Apple, Netflix and Google.

The Dow Jones Industrial Average fell 650 points (or 2.29%) and Donald won’t want to see this happen for the week ahead of his date with destiny next Tuesday.

So could it be that big US companies and professional investors are just tired of the Trump era? And this will mesh with the escalating concerns that the President has mishandled the Coronavirus challenge with new cases surging over the past seven days averaging nearly 69,000!

“The country saw more than 83,000 new infections on both Friday and Saturday after outbreaks in Sun Belt states, surpassing a previous record of roughly 77,300 cases set in July,” CNBC’s Fred Imbert reported.

And this is how a big end of town expert, Frank Rybinski, chief macro strategist at Aegon Asset Management, saw the spike in infections: “To me, this is Phase 2 of the pandemic [and]…until we get some eradication of the virus, it’s going to be like a grey cloud over the market.”

Rybinski says he has been “reducing risk” from its portfolios in recent months.

This is the economic view on the virus and it comes as politically it is taking centre stage.

“It will probably be the biggest issue for the 2020 election,” said Laura Merrifield Wilson, an assistant professor of political science at the University of Indianapolis. (dw.com)

The infection numbers have to be bad for Donald Trump, with 8.3 million Americans infected this year and 220,000 people have died, which must tally up to a lot of potential votes against the man in charge if the affected families decide to get political next Tuesday on polling day.

Those who hate Trump and his strong arm Napoleonic ways will see the Coronavirus as the entrepreneur-turned-President’s Waterloo. This election could wind up being a referendum on how the White House has managed the virus over the past eight months.

Not helping the stock market and therefore the Trump re-election plans is the stimulus stalemate where the Republicans disagree with the size of the stimulus program that the Democrats have put forward.

Wall Street wanted one before the election, with many Americans having lost the equivalent of our JobKeeper support. And the fear is that the US economy will fall over a fiscal cliff.

A fiscal cliff means a lack of stimulus from the government leads to less consumer buying, businesses stop investing and the economy goes over the cliff into lower economic growth and rising unemployment. This will hit company profits.

Wall Street fund managers don’t like the companies they’ve invested in doing badly, so they could be thinking Donald is becoming too hard.

When infections were falling, the election thinking from the big end of town went like this:

• Trump is unpredictable and his China trade fight is unsettling but he does get concessions from Beijing.

• His tax and less regulations approach was seen as pro-Wall Street.

However, with infections rising and no stimulus coming at the moment, smarties doing the economic and company profit numbers aren’t getting the answers they want to see. And that could easily explain why Wall Street sold off overnight.

This also comes as one of the biggest investment houses in the world, Goldman Sachs, has basically given a Biden victory the thumbs up.

We expect that spending would increase the most under a Democratic sweep of the House, Senate and White House.”

So what Goldman is saying is that the positives from Biden’s big spending will outweigh the negatives from higher taxes and more regulation.

Here in Australia, we’ve seen the positives from big spending, with our stock market up about 6% since the details of the huge Budget Deficit were leaked to the media.

Budget day was October 6 but the leaks came thick and fast in the week before, and see how stocks reacted. I call this the Frydenberg rally but Biden could bring a similar surge for Wall Street if he gets up because of his higher spending promises and his more aggressive stance on infection control.

But are the more lefty Democrats bad for stocks? As the chart above shows, history says the opposite!

“Historically, Democrat Presidents have always presided over secular bull markets except for Roosevelt in the latter half of the 1930s.” my colleague and ex-Treasury Secretary of NSW, Percy Allan, points out.

Anyone who dismisses Donald’s chances of winning next Tuesday has ignored his surprising history. And the fact that a lot of voters worldwide are sick of non-delivering politicians and the growth of political correctness, which castigates those who haven’t embraced new-age thinking.

Trump was a protest vote in 2016 but the question is: could the protestors now be lined up against the failure to get a Coronavirus-dividend of Australian standard?

I told my Switzer Report subscribers yesterday that Percy Allan says the technical charts suggest the bear market is over for Australia and a bull market lies ahead, but the Yanks weren’t quite there, yet. That could change next Tuesday.

Is the Morrison government breaking bad on superannuation?
Choose your poison: stamp duty or land tax?
Why is Labor’s Joel Fitzgibbon wanting to cancel Albo’s ticket?
What Labor has to learn from Donald Trump!
Nixon & Trump: two failed Presidents