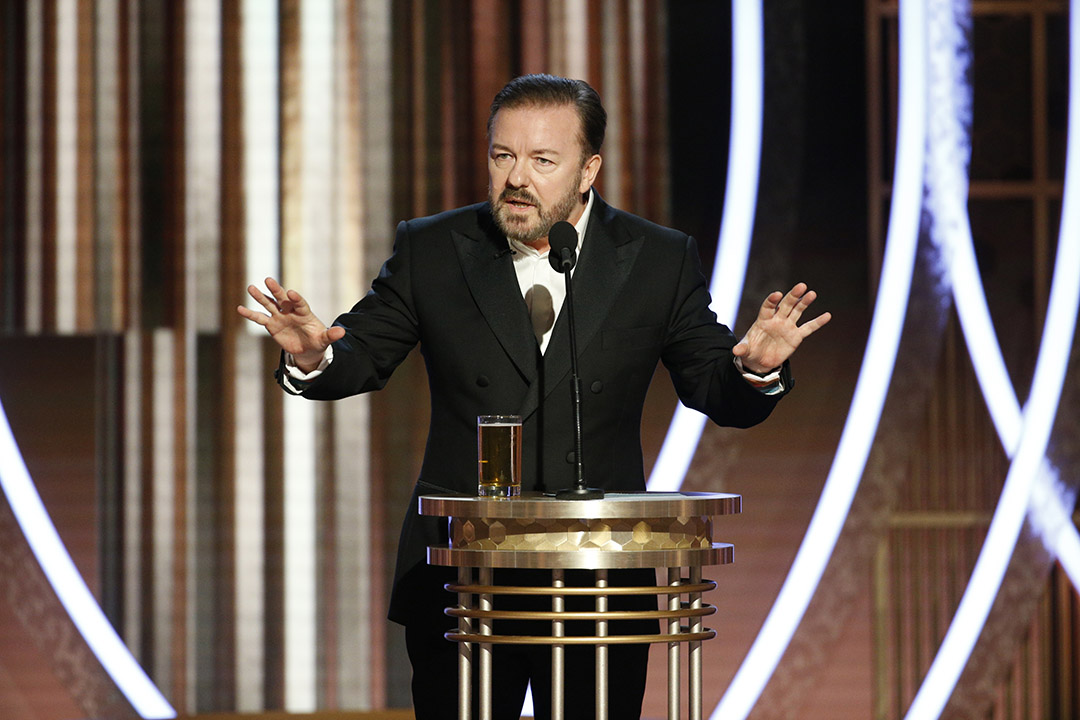 What would Ricky Gervais say about our lockdowns?

The lockdown in Sydney and now Melbourne and probably in other cities because of this damn Delta strain, had me thinking about comedian Ricky Gervais and what he’d say if he was Gladys Berejiklian at her depressing daily press conference.

It’s a time when those really locked up “turn their lonely eyes” to her (as Simon & Garfunkel would’ve sung) to see if this lockdown will soon end.

That 11am press conference has become a national must watch or listen to segment. In recently times, it has been NSW’s Gladys Berejiklian ‘on stage’, but some weeks ago it ‘starred’ Victoria’s Dan Andrews or his stand-in replacement, whoever he is? In between, there’s been cameo roles by other Premiers.

Why is this TV show-and-tell so important? Well, it determines how our lives are led, what our businesses will do, how much you’ll be paid and whether you have or will have a job!

Employees who are taking all this stay-at-home stuff in their stride should think about whether their employers are finding running a business as easy as their employees could be finding working from home.  For many bosses, these are trying times, with less revenue, extra costs, lower profits and even temporary or even longer term losses that mean they’re under a lot of pressure.

Yep, that press conference and what’s announced by the Premier, wherever they are or who it is, is really important.

I must admit I’m not in the position of most, as the media is seen to be ‘essential’. But for those locked up at home, what our premiers tell us is compulsory viewing/listening. But yesterday, I had sympathy for the NSW’s Premier as many of my media friends got stuck into her over not defining what an essential worker is.

A person’s capacity to whinge about just about anything never ceases to amaze me. Of course, it’s the very nature of modern media that we have a team of professional complainers called commentators, who on a daily basis find something to point the finger of blame at politicians, generally, but usually at anyone who’s in a position of power.

Yes, I know I’m a commentator, but I have to defend myself by arguing that I do try to explain the news rather than just tell it with a one-eyed bias, or simply slag off at the main players in the ring.

I’ve learnt from being an employer, who really takes the risks and provides opportunities for others via jobs — on the hope that the business dream pays off and we all end up winning — that main players deserve respect.

Employers in the whole scheme of things are essential workers. If they can’t keep their businesses alive, and their stay-at-home workers in a job, by working from home themselves, then they have to ignore the lockdown!

Scott, Gladys, Dan, Annastacia and so on are in a difficult job at one of the most scariest times to be leaders. And I reckon most of them would love to have the freedom to do a Ricky Gervais on some of the media smart Alecs that throw them inane immature questions on a daily basis.

That’s what I thought as the media piled in on Gladys in Thursday, who once was seen as the purveyor of the ‘gold standard’ for handling the Coronavirus.

Journalists are relishing reminding us all that in May, the NSW Premier said she had “made sure” that NSW had “the systems in place to be able to weather whatever came our way, so that we wouldn’t ever go into lockdown again”.

Whoops! But when she said that, we hadn’t encountered the Delta strain, so she has been proven wrong. But does that mean she deserves a pathetic press pile in?

OK, in Olympic terms, it’s not the gold standard, but she’s still worthy of a silver or bronze medal for fighting the economic catastrophes of the Coronavirus.

The others who might claim gold have effectively done a Steven Bradbury and ‘skated’ carefully by closing down their borders and businesses to avoid what both Sydney and Melbourne have gone through.

By the way, if Gladys had used the Queensland and Western Australia approach and shut up shop, this economy of ours would be growing slower than it has been. Unemployment wouldn’t be 4.9% but a lot higher, as NSW provides a lot demand to other states. If you can only see the minuses of the NSW Premier’s efforts, there are actual big positives that Josh Frydenberg and others with economics training could point out for you.

That’s what I was thinking as the media asked Gladys to name who are ‘essential’ workers. And that’s when I laughingly hoped she’d do a Ricky Gervais and say to her inquisitors: “OK, I’ll name the essential workers and for starters, you no-hopers are not on the list, so pack up your mics and cameras and piss off home!”

(Note, that’s not Gladys or me saying “piss off” but us channelling that naughty and abusive Ricky G!)

Lockdowns have been great for streaming services and on Saturday, I was trawling Netflix for something we haven’t seen and that’s when I stumbled onto Ricky’s Humanity stand-up special.

Yeah, I know he can sometimes go too far asking us to be objective and non-narrow in our thinking. He can be plain rude, but he is funny, and a lot of his funniness is in saying ‘stuff’ that needs to be said to groups who take themselves too seriously. He targets bigots, shutdown merchants of free speech and those imposing their second-rate thinking on others who are scared of a Twitter or media backlash.

This new age, where there are social platform pile-ins for anyone who defies mainstream thinking, has made politicians even more cowardly than they normally are.

Imagine Gervais-style political leaders who really had the guts to tell us what we need to hear!

The intriguing realisation of previous Prime Ministers — Bob Hawke, Paul Keating and John Howard — was that they actually did confront us. Hawke and Keating took on the unions on wages and business on over-protection while Howard gambled that we’d vote for him with a GST! And we did!

Modern political analysts think the escalation of social media platforms like Twitter, Facebook and so on has made it harder for politicians to play a hard-arse, Gervais-style leadership game. And that’s because it’s easier to get people to hate you via these uncontrolled courts of public opinion, than it was before 2006.

Interestingly, Facebook kicked off in Cambridge, Massachusetts in 2004 and Twitter was started in San Francisco in March 2006.

And in 2007, Kevin Rudd used the Internet and social media to win the Federal Election, and John Howard even lost his seat! Recall Kevin 07?

Since then we’ve had a revolving door of failed PMs — Rudd, Gillard, Rudd, Abbott, Turnbull, and the latest polls say Labor is now leading ScoMo’s Coalition.

Scott might have met his Waterloo at the hands of AstraZeneca and the social backlash that has come out of our failed vaccination program.

What would a Ricky-style ScoMo say about AstraZeneca? I’m sure an F-word would be in there somewhere!

If ScoMo and Gladys need to learn a lesson from the ordeal of leading through Coronavirus times, it might be to be more like Ricky Gervais and toughen up the rhetoric and tell us what to do.

And I’d suggest they spend more time telling their public servants, who aren’t all great at customer care, to think about how they can avoid people sitting in their cars in Fairfield for eight hours to get a test that could have been done anywhere!

What would Ricky say to those thoughtless public servants? And please don’t remind me that emergency workers are public servants too! Yes, I know. They are the good ones but in the public service there are bad, lazy and uncaring ones who have jobs for life and it shows!