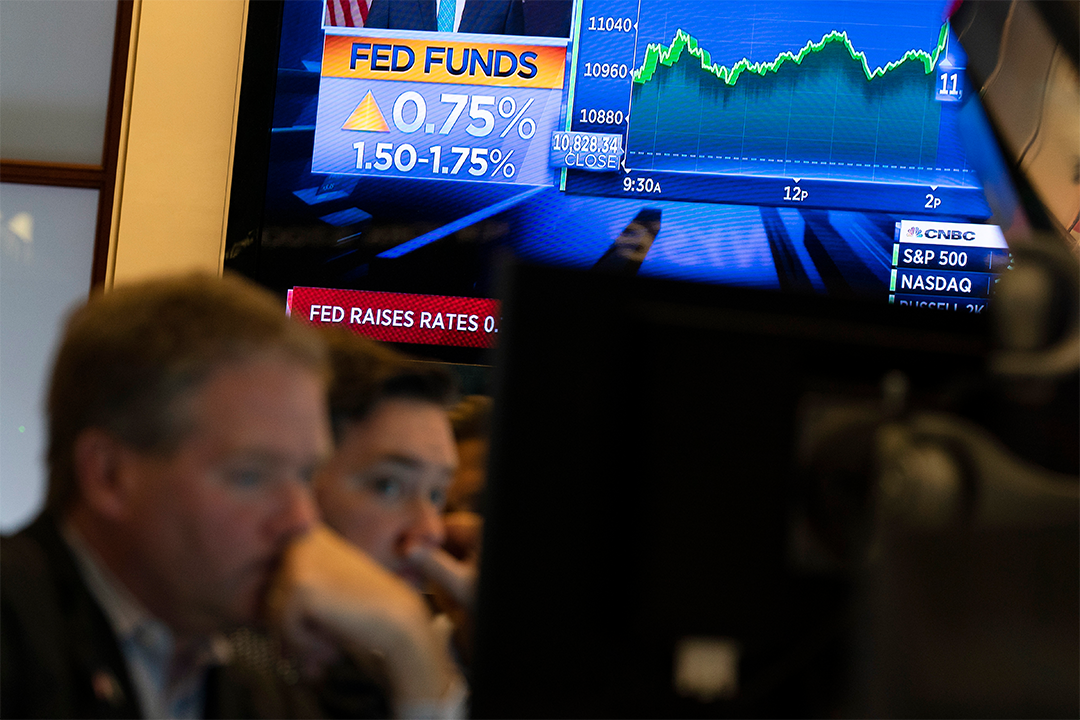 US stocks up despite huge rate rise

Stocks were up ahead of the Federal Reserve decision on interest rates despite the expectation that the rise would be the biggest in 28 years — a hike of 75 basis points!

Old hardheads such as UBS’s Art Cashin, who’s the longest-serving broker on Wall Street and who I’ve interviewed when I’ve taken my TV show to New York, says the Fed has leaked this expected big lift in rates.

Art said the Fed did a 0.75% hike in 1994 and it shocked everyone, and in fact, drove the Orange County into bankruptcy! He says “old-timers” at the Fed probably counselled chairman Jerome Powell to give the market a heads up on the plan for a big rise.

Apart from the actual rise in the official rate, the supporting statement, along with the “dot plot” story from the Fed board members (who vote on rate changes) will be closely analysed and that will then impact stock prices.

The “dot plot” shows what the individual members of the Fed think will happen to interest rates going forward. It’s like a sneak preview but it’s only their best guess and hasn’t proved all that reliable. But markets and the media still like to focus on its implications.

Ultimately, it will be economic data around inflation in the US that will determine when interest rates can stop rising and, in turn, when stocks can be bought again.

Some madmen are calling for a 100 basis point rise to shock US consumers and businesses to stop inflation in its tracks, but the Fed knows the biggest chunk of its 8.6% has been caused by cost rises linked to the Ukraine war, with its impact on oil prices and food, as well as the cost rises from supply problems in locked-down China.

Like our RBA, the Fed can only hit the demand part of inflation using interest rates so both central banks have to be careful they don’t over-smash consumers and businesses and create a recession.

If they do, Jerome Powell and Dr Phil Lowe should be seen as failures. Yep, what they have to do is a tough job but they get paid the big bucks to get it right. And there are no excuses if they screw it up.

Interestingly, at his last press conference in May, Mr Powell dismissed the need for a 75-basis point rise but he hadn’t seen last Friday’s 8.6% inflation number coming.

By the way, inflation could be falling, and some US indicators say it is, but when it statistically falls enough to kill fears that it’s becoming entrenched is really a guessing game.

One lady who’d like to see more clarity on inflation and rate rises ahead is Cathie Wood, who runs the ARK Innovation ETF (ARKK), which is down 61% since the start of January, after being one of the best-performing funds before interest rate rises KO’d tech stocks.

In February 2021, ARKK was a US$155 stock and is now US$39.57! Cathie thinks the market is “pretty close” to a bottom but I suspect she won’t be sleeping better at night until inflation is on the way down and the Fed takes a decent breather from rate rises.

As I’ve said before — it won’t happen overnight but it will happen.

By the way, the Fed did opt for a 0.75% rate rise and Mr Powell said he’d be watching the data, and if another 0.75% was needed, it would be delivered. However, it could be only 0.5% if the key inflation numbers justify it.

Interestingly, US stocks went up on the news and there could be some belief that this tough interest rate play might be the circuit-breaker that helps bring inflation down at a rate that might see the Fed take a breather from these pesky but necessary rate hikes.

That spike on the chart above shows how US tech stock players reacted positively to that big 0.75% lift in rates.

If the Fed hadn’t got us ready for this big hike, I bet stocks would’ve dived big time. That said, I think stock market negativity will hang around until inflation is on the slide.