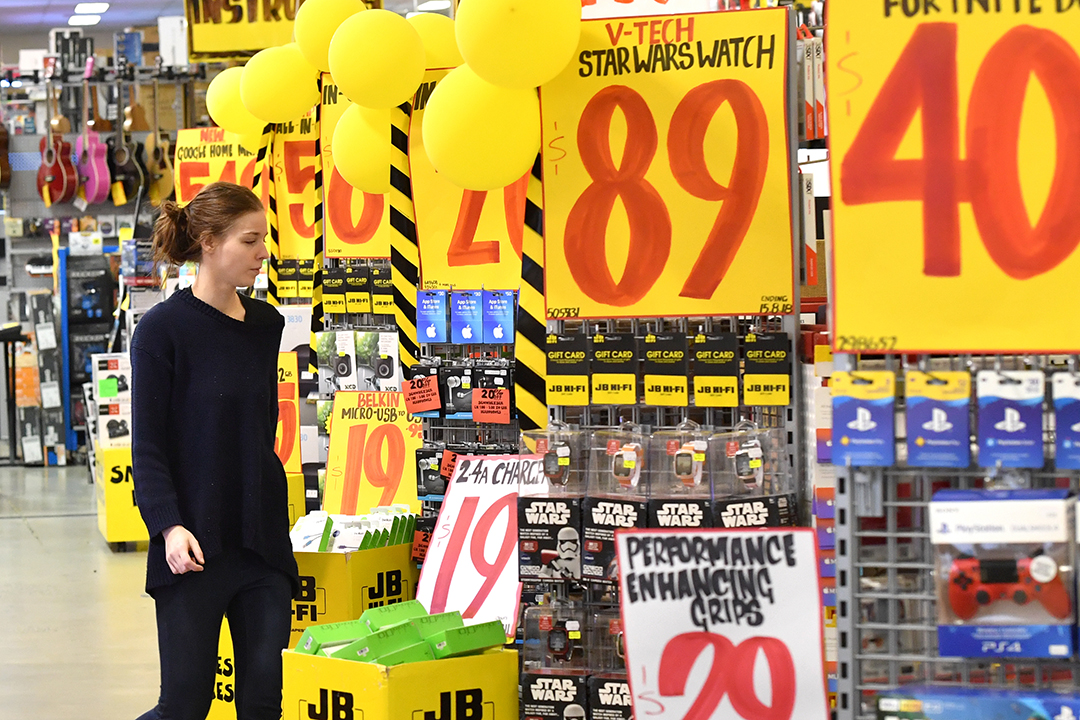 On the day that JB Hi-Fi stuck it to the short sellers and the media alarmists who loved to drag down local businesses potentially threatened by the arrival of Amazon, a real short-term threat to many hometown businesses has raised its ugly head — the Coronavirus!

But what’s surprising me is the way that our stock market seems to be taking the threat in its stride. Happily, big stock players are ignoring maniacs who are telling us that the Chinese economy has a “base case” of being closed for three to six months!

Fortunately, most normal people don’t read the claptrap of doomsday merchants, who have been wrong on just about every scary economic and market event. However the impact of this virus on many well-known businesses needs to be taken seriously.

That said, on the day JB Hi-Fi’s wonderfully successful CEO, Richard Murray, reported a better-than-expected profit showing, he also revealed the top retail business will have tourist customer problems and a supply chain issue because a hell of a lot of his products come from China.

Despite that, the share price rose 11.5% to $44.71, which makes me happy because I argued a year ago when the market believed the Amazon threat story and the share price tumbled to $23, that the alarmist predictions were way over the top. That said, I never expected the company to do so well that it would now be a $44 company in the space of a year, with retail struggling across the country!

Did I say Richard Murray is a top CEO?

Over that same time, Harvey Norman’s share price has gone from $3.47 to $4.57, which is a 31% gain. That’s not a bad effort for the octogenarian Gerry Harvey, who continually gets pilloried in the press for being out of touch. And by the way, this stock paid a dividend around 7% last year before franking.

But the question is: can these two companies, as well as others closely linked to China, successfully deal with the Coronavirus?

At this stage, the worst-case scenario of a substantial cut in supplies is speculation but the CEOs of potentially affected businesses can’t ignore the possible threats. That’s why they are top business leaders.

“The challenge for us is there’s so much noise, trying to cut through the noise – there’s no doubt it’s a fluid situation,” Murray told the AFR.

Meanwhile, Blackmores, which initially has done well because Chinese customers have turned to vitamins to fight the virus, now are worried that the Chinese tourist travel ban will kill their “suitcase trade”.

Clearly, Chemist Warehouse and rival pharmacy operations that service Chinese travellers here in Australia will be bracing for a retail hit. And even builders who rely on Chinese supplies and Aurizon expect a delay in receiving 66 rail wagons actually made in Wuhan!

In trying to do the sums on a virus that could have uncertain implications on an hard-to-define group of businesses across many industries, the credit ratings agency Moody’s says this will be another negative for local banks.

Australia gets around 1.4 million tourists a year from China. In 2018, they spent $12 billion, which puts a lot of pressure on Treasurer Josh Frydenberg, who’d be trying desperately to keep the economy out of recession. We’ve dodged the R-word for 29 years but we could be in trouble if this Coronavirus goes on longer than expected,.

The country (and therefore the economy) has copped bushfires, followed by the Coronavirus and now floods. With consumer and business confidence already at historically low levels, this could all hurt the banks’ bottom lines!

When you think about the impact of this travel ban, we have so many businesses that are tourism-dependent. Tourism is our third most important export behind coal and iron ore, and China is a huge customer!

Compared to us, Wall Street and the USA is less affected by the virus-infected Chinese economy right now, and how our stock market has avoided a big sell off is surprising. As stories like these pile up, this week will be significant test of local shareholders’ optimistic inclinations!

The indicator that will prove vital to the future of our economy is undoubtedly the infection and death rates linked to this virus. There are those out there who actually want this sickness to be the Waterloo event that brings down our economy to teach optimists an overdue lesson about buying property, stocks and investing to build wealth. This shows just how sick these people are!

The joke is that if they’re proved wrong and again we muddle through another crisis, as we have for 29 years without a recession, they won’t learn anything from it. While I expect bad times inevitably have to come (it’s the way it is with business and economic cycles), these doomsday types nearly lust for bad times to prove that their learned view, which has been wrong for decades, will one day be proved right. They really are seriously infected with an irrepressible and contagious negativity virus that medical scientists need to find a vaccine for!

Is JB Hi-Fi a buy? Click here to watch the latest episode of Switzer TV: Investing.