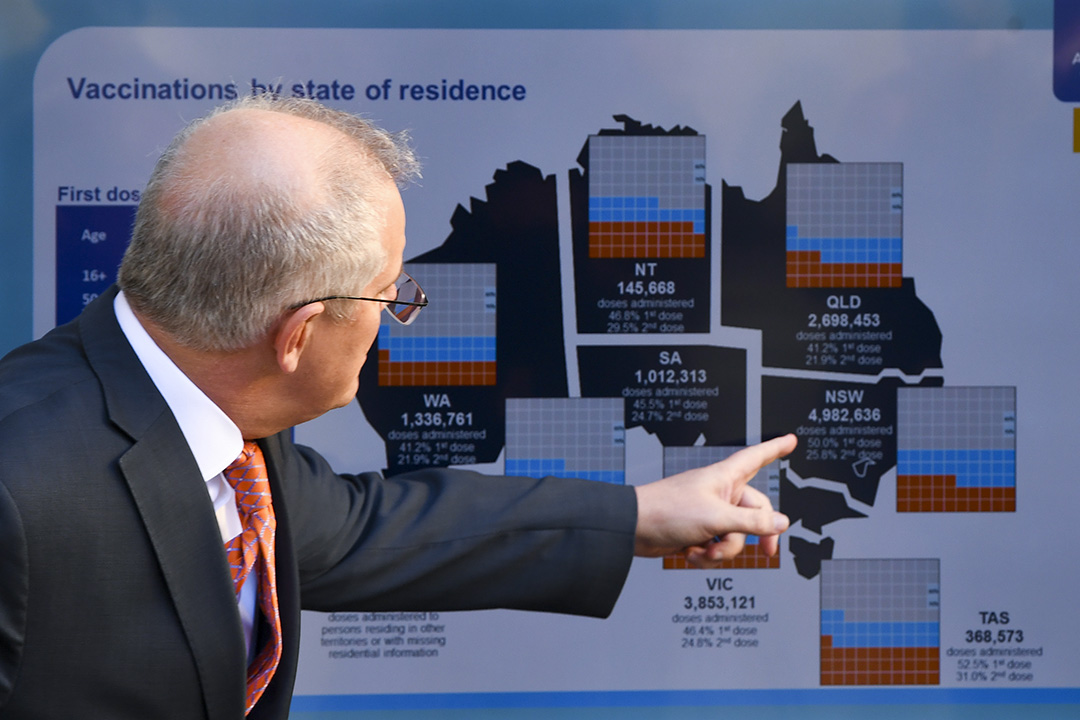 A war is about to break out between Canberra and the lockdown states of NSW, Victoria and the ACT, which spill over into the fortress domains of WA, Queensland SA, Tassie and the NT.

The history of Canberra and the states has had lots of skirmishes and battles but this could be a war, with Treasurer Josh Frydenberg telling the states that pandemic payments supporting workers and businesses will end when inoculation levels hit 80%.

When I studied for my Masters of Commerce degree, I took a business history course (the best I ever took!) where I had to do a paper on that great Aussie resource — the Murray River. It’s not only a critical source for agriculture and supplying water to the populations along the river, it’s also the state border between NSW and Victoria.

The problem is that the river moves! This caused trouble in pre-Federation days when a NSW farmer found his field was now in Victoria and when he wanted to take his stock to his field (now in another state) he was charged a tariff! States in those days did that and it actually ended up in gunfire!

Needless to say, there was a lot of fighting over the border. After one great flood, the town clerk of Echuca officially demanded the NSW Government in Sydney take back its water!

The first big shot in this looming war is the news that the Morrison government is putting a gun to state and territory leaders telling them the $1.5 billion support each week will end two weeks after the 80% level is hit.

The Australian’s Patrick Commins writes: “State and territory leaders who delay their reopening will run the risk of leaving workers exposed to a sharp reduction in support.”

And this is how Treasurer Josh Frydenberg sees it: “We can’t eliminate the virus. We need to learn to live with it in a Covid-safe way.
“This means we must ease ­restrictions as vaccination rates hit 70-80 per cent in accordance with the plan agreed at national cabinet.”

So what will go? For a start, these lifelines from Canberra:

3. The $1 billion a week of Canberra outlays to those in lockdown in NSW, Victoria and the ACT.

But the news gets even harder, with Cummins revealing that “…under a transition plan to be announced on Wednesday, once a state or territory reaches 70 per cent, full vaccination of its adult population, workers receiving the weekly Covid disaster payment will need to reapply for each week that their area remains a designated Covid hotspot.”

At the 80% double-jab mark, anyone who has lost more than eight hours of work will receive $450 a week for one week only. Meanwhile, those who have been receiving the $200 relief payment will see it cut in half.

For week two, the $450 will drop to $320, which is the JobSeeker payment. And after two weeks, there’ll be no more disaster payments and anyone out of work would have to go on to JobSeeker.
This is a hardball play by the Treasurer and the pushback from the States will define the war ahead.
“As restrictions ease the economy is well positioned to bounce back,” the Treasurer said. “Today’s announcement about the winding down of the Covid disaster payment will provide businesses and households with the certainty they need to plan for the future.”

Also, Canberra’s support for business ends at the 80% vaccination mark. The whole action has resulted in NSW Premier Gladys Berejiklian calling for her state and territory counterparts to follow the national plan and open up, once vaccination thresholds are met.

“I hope that all state leaders stick to the national plan,” the Premier said. “It’s a good plan which has guided the NSW decision making and it’s a plan which will hold us in good stead.”
You don’t have to be an economist to work out that if borders remain shut because of stubborn premiers, this will be an economic brake on growth, job creation and business profitability so there’s bound to be interstate feuding and the Morrison Government will be targeted for starting the fire by those fortress state premiers who don’t want to risk losing citizens to the virus and political popularity at the same time.

It’s hard not to see this becoming a war, with our nations’ leaders taking pot-shots at one another to try and deflect the incoming complaints from businesses and workers who’ll no longer receive federal government assistance.
All this puts the focus on our jab rates across the states, with it being logical to conclude that if vaccination rates in Queensland and Western Australia are low compared to NSW and Victoria, the former will hold out for who knows how long. And this will hurt our economic recovery.

The Australian says this is the latest double jab breakdown:

These numbers can’t raise your confidence that WA’s Premier Mark McGowan and Queensland’s Annastacia Palaszczuk are going to be gifting us with open borders before Christmas, which is bound to be another bomb that will be thrown in this brewing border war.

Right now, Treasurer Frydenberg is telling us we have to learn to live with the virus, but the potential problem with the premiers is seen with the Queensland Government toying with the idea of switching Sunday’s grand final from Brisbane to Townsville because of four new local cases!

I can see both sides of the argument: lives versus the economy. But a lot of businesses that have spent a lot to be ready for a grand final weekend could soon be slugged with losses if the game is forced into Townsville.

The rest of the world really thinks we’re the greatest scaredy cats on the planet and others think the Premiers of Western Australia and Queensland are being economically reckless by not encouraging higher vaccination rates ASAP. That’s not only a health imperative, it’s an economic one!

Kristina Keneally's candidacy for Fowler represents broader issue in Australian ...
The new tree-hugging Premier & his Treasurer love the colour green
The Premier of the premier state has a huge national job ahead
Greta’s ‘blah, blah’ speech gave us a lesson on economics
Will Aussies be flying to Berlin before Brisbane and Tokyo before Tassie?