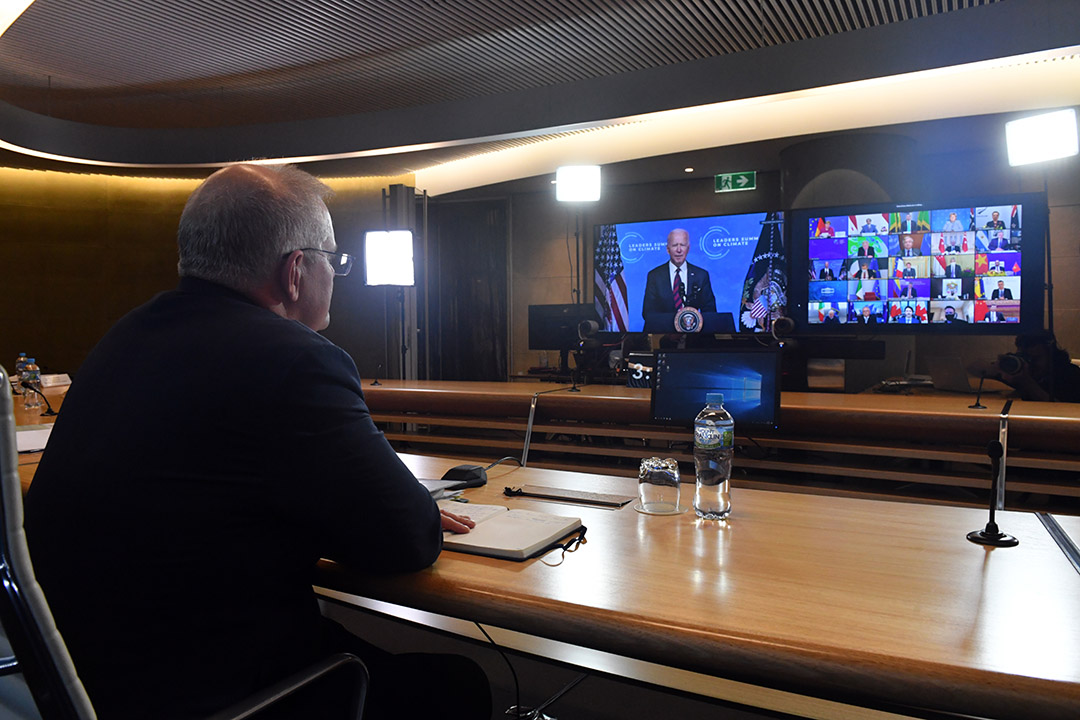 ScoMo goes green and you can bank on it!

US president Joe Biden has hosted a global Earth Day Summit and in his speech to the climate change pow-wow our Prime Minister Scott Morrison has embraced the idea of zero emissions, but he’s decided to dump the “when” for the “how”.

The headlines around the PM’s contribution must have some of us wondering, has he turned into a Greenie?

Looking at his “when” rather than “how” speech, it was a clever and innovative approach. Let’s face it,  we’ve had time deadlines for decades from big promising politicians on carbon emissions and maybe ScoMo has gone for a smarter approach to the problem of politically dealing with the climate change dilemma by focusing on how we’ll get the zero emissions happening.

Well, on one hand, everyone wants to save the planet from harm (pollution, man-made impacts on earth temperatures, related natural disasters and so on) but we want all countries making the same commitment and we don’t want our economy to be smashed unnecessarily, while others such as China, India and the US emit heaps of crap into the atmosphere while lecturing us.

Yes, I get it, per head we are big contributors to the greenhouse gas in the atmosphere, but on an absolute basis we are incredibly small because we have a small population. So our contribution to helping the planet is more philosophical rather than materially important.

Wikipedia likes to portray us as climate bandits. Check this out: “Greenhouse gas emissions by Australia per capita are still well above the OECD, and developed world average, with most sources pointing to 22-25 tons. Australia has one of the highest per capita emissions of greenhouse gas in the world, with its 0.33% of the world's population releasing 1.07% of the world's greenhouse gases, contributing to global climate change. Australia uses principally coal power (70%) for electricity but this is decreasing with a growing share of renewables making up the energy supply mix. Emissions by the country have started to fall and are expected to continue to fall in coming years as more projects come online.”

However, in total contribution terms the World Resources Institute estimates that Australia was responsible for 1.1% of all CO2 emissions between 1850 and 2002.

So the rest of the world is responsible for 98.9% of carbon dioxide emissions. But as a country, if we went to zero emissions ASAP, it would have little impact on the so and sos who are pumping out so much carbon ‘crap’ it’s unbelievable!

As a country pushing “the how we will cut emissions” is smart. The PM put this out there at the Summit: “In Australia our journey to net-zero is being led by world-class, pioneering Australian companies,” he said, name-checking Fortescue, Visy, BHP, Rio Tinto, AGL and “many more of all sizes”.

Linking the big name companies that are working on lifting their own carbon games shows that we Aussies aren’t really climate killers.

And whoever wrote this for the PM deserves an order of Australia: “In the US you have Silicon Valley. Here in Australia we are creating our own Hydrogen Valleys, where we will transform our transport industries, our mining and resources sectors, our manufacturing and our fuel and energy production.”

Only time will prove whether the PM is only hot air, but I suspect President Joe Biden is going to play a global cop role in getting his allies on board, with the idea that you can change the way we power industry and you can actually create jobs at the same time.

Of course, coal jobs will be lost over time but hydrogen energy will create them.

Anyone who doesn’t believe we can create hydrogen companies, should check out the Hazer Group in WA. (https://hazergroup.com.au)

And the stock market believes that hydrogen has a future story, as this chart of the Hazer Group shows:

Its share price is up 212% in a year since I first stumbled on them at our small cap conference just before the Coronavirus crash of the stock market.

The AFR said the PM was promising that Australia will make “bankable” reductions in carbon dioxide emissions even without a concrete 2050 net-zero target. Only time will tell if these promises are hot air, but it was also smart to link our goal to the country’s former chief scientist Alan Finkel, who heads up an international technological partnership programme.

The PM proved he’s a PM with a strong marketing background when he said: “Future generations will thank us not for what we have promised but what we will deliver - and on that score Australia can always be relied upon,” he told the virtual summit of 40 world leaders.”

Whether you like it or not, climate change reforms are coming down the pike and this will bring threats to existing businesses and jobs, but they’ll also bring opportunities and jobs.

What ScoMo has achieved with his “how not when” speech is telling local doubters of alternative energy that our big name companies are on a quest to kill their emissions because the stock market of investors, year by year, is demanding it.

And if companies like BHP and Amcor want to go greener, there must be an economic reason for doing so. History has told me that you can get a lot change if there’s a potential pay-off in it.

Investors are punishing polluters and companies that look like they’re not good global corporate citizens.

As the great comedic actor Peter Sellers once observed: “People will swim through shit if you put a few bob in it.”