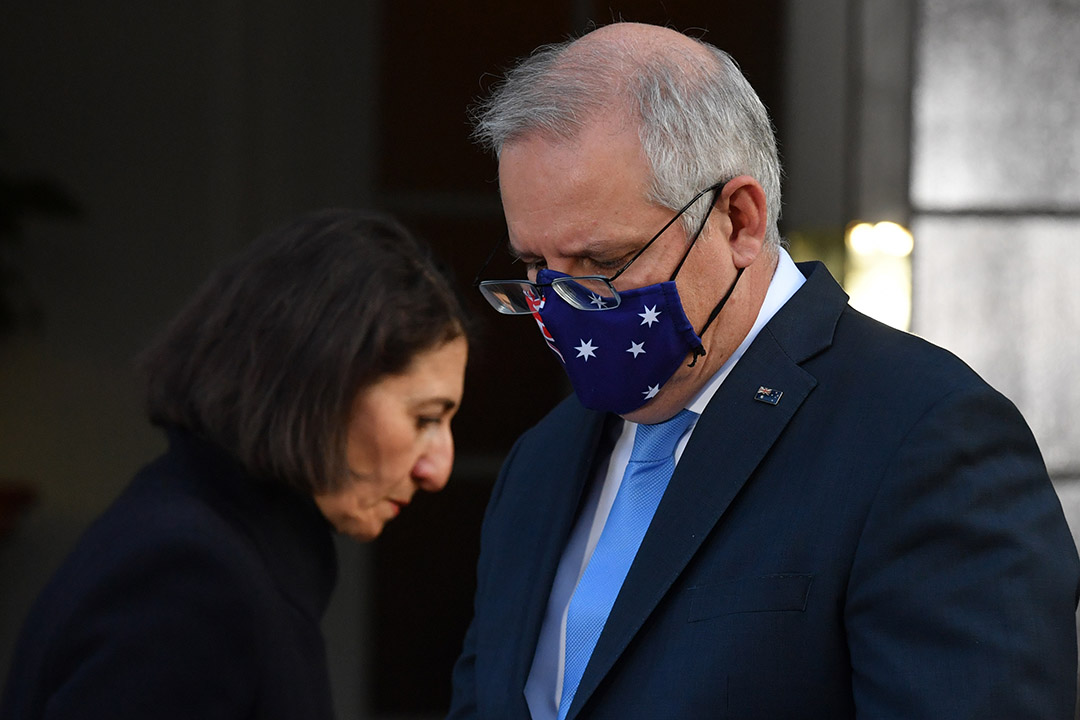 It’s the blame game of the century: Gladys v Scott

But that was then. This is now. And the blame game is starting. The first real salvo has been fired, with the AFR’s Phil Coorey telling us that “frustration is building in the Morrison government over the slow distribution of business assistance in Greater Sydney, as it finds itself bearing the brunt of the blame for a problem that is of the NSW government’s making.”

Here are the latest popularity contest numbers based on the most recent Newspoll conducted over August 4-7 from a sample of 1,527 voters: Labor has a 53-47 lead, unchanged from three weeks ago.

Now 49% of voters were dissatisfied with Scott Morrison’s performance (up 4%), and 47% were satisfied (down 4%), for a net approval of -2! That’s an eight point slide. This is ScoMo’s first negative rating since the start of the Coronavirus-declared pandemic in April 2020.

The last thing I want to do is lay into any politician for mishandling this damn virus that has bowled more curve balls than Shane Warne. Sure, I gave it to Victoria’s Dan Andrews for being political over the ADF being involved in hotel quarantining but I would’ve gone soft, even on him, if the death rate in Victoria was more like the rest of the states. Our total deaths are 944 and 820 came out of Victoria. NSW has 89 and the Delta strain has pushed this number up since late June.

The reality of this new version of the Coronavirus is that it has exposed all governments as under- estimators of how contagious this strain is. And it has shown that public services are not equipped or resourced to do the job of helping businesses and their employees.

And while it’s understandable, given the Alpha version of the virus was so well-handled, it’s time for Federal and state governments to ramp up their assistance to businesses, or we could have an economic problem that lasts longer than we think.

JobSaver is actually a national programme but NSW insisted on taking responsibility for handing out the grants to struggling businesses through its Service NSW network. It even gave the programme its own name — JobSaver — but now the PM would be worried that disgruntled businesses won’t forget how hopeless the programme is and so he’d be concerned about saving his job!

On Tuesday, the NAB business confidence index fell by 18.5 points to a 12-month low of -7.9 points in July. In April, it hit the highest reading ever at +140. But sentiment has turned on a dime and unless government support gets back to 2020 levels, it could take a long time to rebound.

And it’s now infecting consumers with the Westpac-Melbourne Institute Index of Consumer Sentiment falling by 4.4% in August to an 11-month low 104.1. This is not good news for the Federal Treasurer, who until late June had a fantastic economy with 4.9% unemployment.

If this starts to rise, and I know it will, it means his budget repair programme will be put back years and his great reputation as the nation’s top bookkeeper will be negatively affected.

The question is: who’s to blame for this business confidence problem? ScoMo blames Gladys and that’s linked to the business help grants, which are `co-funded by the states and the Commonwealth, and provide weekly payments of between $1500 and $100,000 a week to businesses with turnovers between $75,000 and $250 million that have suffered a 30% decline in turnover. Independent contractors such as tradespeople are entitled to $1,000 a week.

At this time, only around a third of the grants have been paid out to business and this is a failure of a process managed by the NSW Government.

That’s not to say it would be any better if it was all managed by Canberra, but I don’t want to play the blame game. I want business helped. Until politicians get more involved with what public servants do and start taking control, then people who have jobs for life won’t move heaven and earth to save the businesses and jobs cruelled by this Coronavirus.

The irony is that if this isn’t fixed fast, the jobs that might be hard to save could be those of Gladys and ScoMo.

Are the premiers of WA and Queensland the biggest threats to the Aussie economy?
Will Steven Marshall win the South Australian state election?
How would you like a big tax cut? Well, cop this!
Pensions to rise, which is great for all of us!
NSW payroll tax cut 50%. Other states will follow!