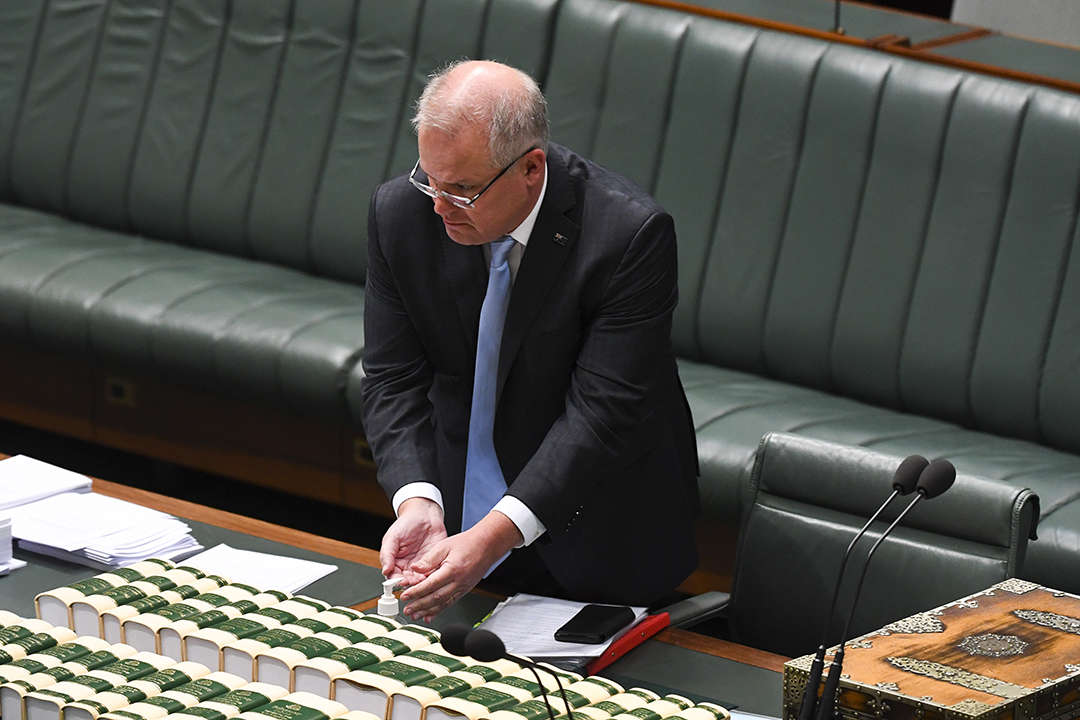 Is the PM pivoting to parole us early from this Coronavirus prison?

US stocks were up again as Coronavirus data continues to look better. And you can’t help but think that the smarties, who work out whether stocks are cheap or expensive, might be redoing their numbers. This would be based on the belief that the world might be able to get back to some kind of normalcy faster than we thought in late February when our share market fell 36%.

It’s now down 27% off its high and given the Wall Street lead, we’re likely to go higher today. But I have to say there’s no consensus around this brave new world that we’re living in concerning when we’ll start approaching normality.

Senator Pauline Hanson thinks we’re effectively locked up until a vaccine is discovered. And she’s not alone, with the likes of Mark Cuban (the US billionaire who owns the Dallas Mavericks NBL team) telling CNBC this morning that he can’t see crowds at basketball games until a vaccine is found!

The NSW Premier has often told us to factor in a six months’ wait before we approach a normal life but the guy who has recovered a fair bit of his mojo (which was lost during our tragic bushfire season) — the PM — has regained voter-love.

He now leads Anthony Albanese as better PM by 53-29%, which is a large improvement from the last Newspoll, which was a closer 42-38%.

It’s important to note that an expert virus- and PM-watcher, now thinks ScoMo is pivoting and dumping the idea that we’ll be living this current weird life for six months. The guy in question is the bond fund manager, Chris Joye of Coolabah Capital Investments, who has pivoted his high IQ research staff from watching money market data to monitoring virus infection and death data worldwide.

Chris not only has a humane interest in the data trends but he has told all and sundry that when the virus data tells a much better story, there will be money-making opportunities.

At a speech a few weeks back, before public speeches were banned to go online, I shared Chris’s view with a group of financial planners, who were clearly rocked by the huge stock market sell-off and the fact that they never had encountered a pandemic challenge to their clients’ wealth.

This is what I showed the audience: “When all is said and done, markets will get what they want through signalling what is and is not acceptable. Order will eventually be restored. And this crisis will pass, probably within one or two months. Those that survive will face the investment opportunity of a life-time….”

“Go Chris!” was my final point on my power-point presentation and he certainly looks like he’s on the money.

However, my interviewing of numerous fund managers tells me that they are either not buying now or if they are, they still hold fair wads of cash. Why? They must think another leg down for stocks will give them another buying opportunity.

History tells you bear markets can have big rallies within the market crash but negativity returns and that’s what investors — both professional and amateur — are trying to work out. That’s why Chris’s take on what the PM is thinking is worth contemplating.

In his AFR story yesterday he says Scott Morrison is “pivoting” and we could be heading back to work sooner than we think. I’m sure there is a Homer Simpson shout for joy but the actual one he would use escapes me at 5am in the morning when I write!

That said, ScoMo is not talking a carte blanche return to normal.

“The narrative has shifted to the Prime Minister flagging that states that crush the transmission quickly could experiment with a more rapid transition to the “new normal” of getting ultra-low-risk, working-age employees back to making a living, which could give them a competitive advantage over states that lag,” Chris wrote.

And sure it’s not what we really want — normality! — but it’s a start that should help our psyche and our share prices.

This change is linked to our better virus data, which Chris predicted for around now and he maintains the Yanks will get better news by the end of April, partly explaining why Wall Street has been up three days in a row.

All this is good news here and in the US, and it’s even being mirrored in Europe but over there it’s early days. Uncertainty about when the virus becomes less threatening will hang over markets and our prayers for an early return to work, restaurants, footie, pubs and so on, like a hovering black cloud, for some time.

As farmers will tell you, black clouds can drop rain or just inexplicably disappear, and right now stock markets are betting this black cloud has a shorter-than-expected-life silver lining.

That lining would be that our success with the virus means we can restart the economy sooner than was thought. The fact that the PM is flexible but hopefully sensible on this matter could be the good medicine we’d be happy to take.

That said, let me warn you of something important. Bear markets are hard to read and you can get sucked into believing the worst is behind us easily and then the market sells off again on a surprise bad piece of news. The potential for bad news with something as unique as the Coronavirus pandemic can’t be disputed.

And if you’re worried that you might have got in too early and bought stocks, Howard Marks, a US market market expert, who Warren Buffett says he reads every day, thinks it’s time to “get less defensive with stocks”!

But what if he’s wrong? Well, experts like Howard would say that you don’t have to pick the absolute bottom of the market because any bottom around the current low levels for stocks will prove to be a good buy over time.

Remember, unless you want to be a trader/speculator, you should be a long-term investor, who, as Warren Buffett has advised, should be “greedy when others are fearful.”