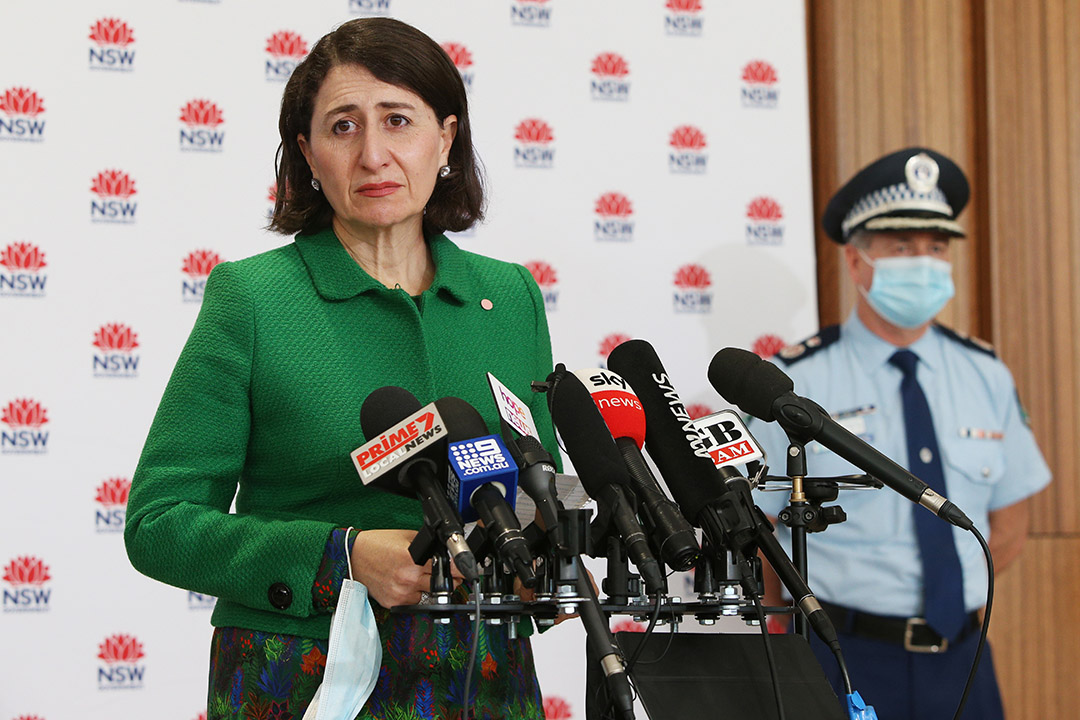 Has our NSW premier been promoted to Chairman Gladys?

On his 2GB radio breakfast show, my colleague Ben Fordham referred to the Prime Minister saying lockdown threats would be over by Christmas! And quite rightfully, Ben said “it’s a long time to Christmas!” Ben also pointed out that with something like 80,000 tests on one day recently, the ‘negative’ Covid readings were over 99%!

It does make you wonder if we’re over-hyping the threat from this damn Delta strain. Sure, we know it’s more contagious but it is less deadly.

A mate of mine and his family recently returned from Switzerland going to his hometown of Brisbane. This was his experience in hotel quarantine: “Apologies for radio silence during hotel quarantine, it was f’ing brutal – my wife had a horrid time, almost stopped breathing a few times due to severe sinus problems. Her issues were totally covid unrelated obviously – God knows we all had more PCR tests than most rugby league players have arrest warrants. And so QLD Health’s response was “would you like an ambulance – you know you will have to restart your 14 days if you leave your room for an ambulance to see a doctor.”

He goes on and he showed me he is a good writer!

“I could write a book about my experience. Suffice to say, Anustascia is getting a lump of coal from our family for Christmas. We are just disgusted with the political approach in this country to the virus. Not to state the obvious, but Australia and Switzerland are poles apart in their medical approach to a problem which obviously then has economic consequences. Please know that the rest of the world is actually laughing at us —I keep in daily contact with my friends and contacts in Switzerland.”

The only comeback to this letter coming out of a raw experience with quarantining Oz-style (in the context of the Olympics where we’re thinking about a lot of sport) is to say look at our death scoreboard!

OK, as an island keeping a lot of infected foreigners out, we are Fortress Australia. But we’re still not doing enough for New South Wales, which is in lockdown because overseas flight crews were allowed in and the Coronavirus ‘cops’ were asleep at the wheel!

Hopeless virus management (at some levels of the public service) and the clot problem with the AstraZeneca vaccine, has slowed down our vaccination rates. This is leaving us prone to lockdowns, with the recent ones in Sydney and Melbourne bound to turn our September quarter economic growth reading into a negative.

Six weeks ago, this wasn’t considered possible. Even five weeks ago, when a two-week shutdown was ordered for Sydney by Premier Gladys Berejiklian, we still thought the growth (that had forced unemployment down to an incredibly low 4.9%) would persist as a strong positive.

But now with a nine-week lockdown looking likely and every bush expert saying “it could be longer”, we have to accept that the six months of growth to New Year will be a lot slower than expected.

The September quarter should be a negative while December will be a better positive, but it should be less than if a lockdown didn’t happen.

That said, provided we get the vaccines and Aussies line up to get jabbed, we will see a big boom in 2022. That’s why the stock market is at record high territory.

Every cloud has a silver lining and you have to remember that stock markets look forward. Even though the economy is crappy now, the better 2022 outlook means smart players buy now to be rewarded down the track.

It’s why Qantas is seen by expert company analysts to having a 24% upside with its share price because it’s expected that vaccinations will lead to open borders, more travelling and greater profits for the flying kangaroo.

Another positive from the negative is that APRA won’t step in to kill the house price rises as soon as some were expecting. Though the rises are excessive, they do keep consumers positive about the house-linked wealth, while they might be worrying about their wages, their jobs or the profitability of their businesses with this lockdown gloom prevailing. APRA would be aware of this. Also, the Reserve Bank will have more reason to delay any interest rate rise because of the negatives out of the lockdown.

But I can’t get out of my mind the really low infection rates, with more than 99% of Sydneysiders testing negative to the virus. But that means a city has to be closed down! In a country with a low death virus death rate, it does look like overkill.

And while on numbers, I love this brilliant piece from Liam Mannix in the SMH/Age newspapers on the threat from AstraZeneca: “On current Australian data, if you get a clot, in about 95 per cent of cases, it is not fatal. As a 30-year-old, that puts my risk of dying from an AstraZeneca clot at 0.00008 per cent, or, as Mr Meyerowitz-Katz helpfully puts it, “one in 1.25 million”. That’s less than the risk of being struck by lightning.

“What about serious injury from AstraZeneca? About one-quarter of Australia’s clotting cases end up in hospital. That’s a risk of about 0.0004 per cent. As we know, our brains are pretty hopeless at making sense of a number that small. Consider an MCG filled with 100,000 people, each aged between 30 to 39, each vaccinated with AstraZeneca.

“On the odds we have, one or two people in the entire stadium would get a clot. How many MCGs filled with vaccinated people would we need, on average, to see a single death? Ten.”

Will Steven Marshall win the South Australian state election?
How would you like a big tax cut? Well, cop this!
Pensions to rise, which is great for all of us!
NSW payroll tax cut 50%. Other states will follow!
Frydenberg tells premiers: OPEN SAYS-A-ME!