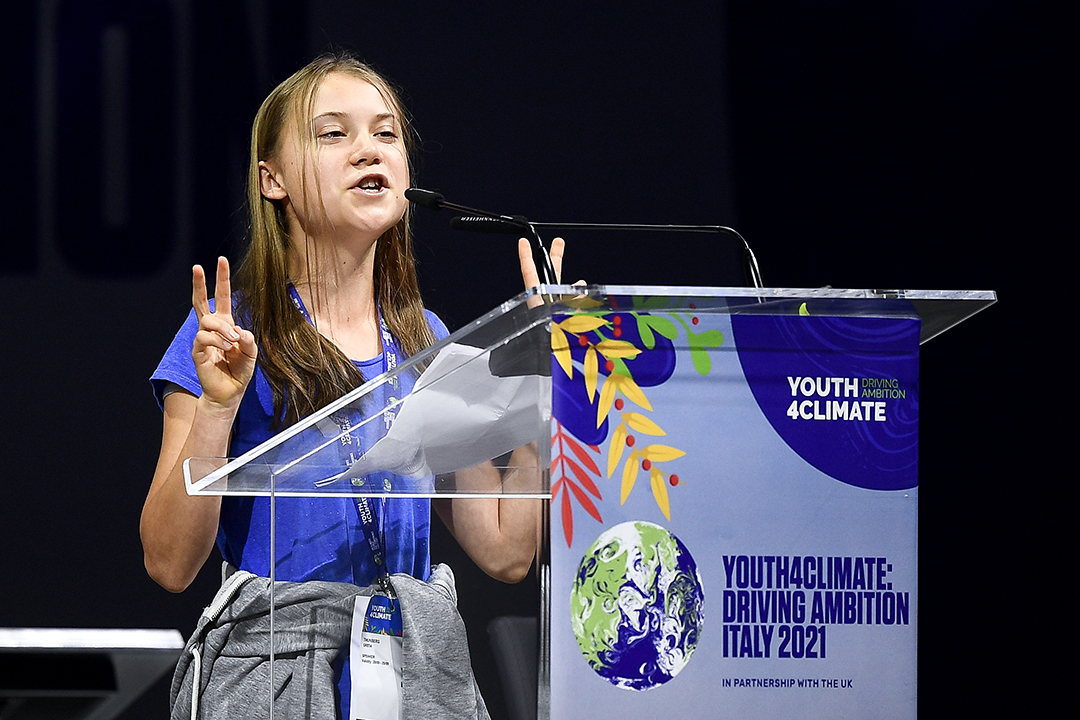 Greta’s ‘blah, blah’ speech gave us a lesson on economics

This week while young Greta Thunberg gave the oldies of the world a lecture on what we’re doing to the planet and how to her our ‘promises’ to fix it really gets down to nothing more than “blah, blah, blah!”

Greta isn’t the first to use Blah Blah Blah as a lightning rod for satire and pointed comedy. In fact, she’s 33 years behind Andrew Denton, who had an ABC TV show called Blah Blah Blah in 1988, when I used to work with him at Triple M.

Of course, he and Doug Mulray did the comedy, while I tackled the business and political commentary. And in those early days, when he was called “The boy genius from indoor cricket”, you could see he was going places and he would have an impact on the world ahead.

Whether you agree or disagree with Greta, she’s a young woman who’ll be with us lecturing us for decades on what needs to be done.

In case you missed her message to the Italy’s Youth4Climate summit on Tuesday, let me give you a quick summary as it was a little more than just “Blah, Blah, Blah.”

In a nutshell she:

• Mugged politicians for being wimps on climate change — that was 30 years of blah, blah, blah!

• Signalled out Joe Biden and Boris Johnson for using the terms “build back better”, which she thinks is just more blah blah.

• Reminded the conference of what the French President Emmanuel Macron said in 2018 that there “is no planet B,” which gave her a chance to show her grasp of irony and that she doesn’t take prisoners, by saying that “there is no planet blah.”

• Added weight to the demands of other young activists from around the world to show them the money that has been promised by big nations to vulnerable countries to the tune of 100 billion euros or $US117 billion.

Greta also came with a fair bit of aggression, as this tweet shows: “We can no longer let the people in power decide what hope is. Hope is not passive. Hope is not blah blah blah. Hope is telling the truth. Hope is taking action.”

Conservative commentators are labelling it as a ‘call to action’ and suggesting that the green movement is socialism with camouflage. Undoubtedly it is, and why wouldn’t a socialist see the good sense of linking the future of the planet and the health of future generations to their desire to redistribute the wealth and riches of the few to a majority that’s a lot less well-off?

It’s all understandable but these “blah, blah, blah” politicians have an unenviable job, which the young and idealistic of the world find hard to understand. And that’s the simple fact, that a majority might now support climate action to save the planet (an Essential poll in early 2020 showed 75% of us want going for zero  emissions by 2050) but politicians don’t know how much we’re prepared to pay for them to make it happen.

By the way, that poll said 68% of Coalition voters are on this very same green train, which explains why the Morrison Government is swinging leftwards to being more green and pro-environment, but they’re not certain how far they can swing and survive next year’s election.

Remember, John Howard in the 2007 election found some new green credentials but it seemed to be too little too late, as the very green-sounding Kevin Rudd was swept to power.

This is how The Guardian’s Leonore Taylor recalled the Howard U-turn: “In late 2006, trailing in the polls, and with community concern about climate change high, he reversed his government’s long-standing sceptical stance about action on global warming and announced a taskforce to look at how Australia could implement an emissions trading scheme.”

Mr Howard not only lost the election but also his once totally safe seat to former ABC journalist Maxine McKew.

Interestingly, this seat of Bennelong returned back to the Liberals and the Coalition three years later when ex-tennis champ, John Alexander, aced McKew at the polls. And he’s still there serving it up today.

A green and fairer world is appealing on paper but when voters get to the ballot box, they need to think that reforms aren’t going to hurt them.

Bill Shorten found that out when he went to the people with what was seen as fair and equitable policies for a majority but an aggrieved minority i.e. self-funded retirees and investors held sway when the votes were counted.

Bill’s reflections on what went wrong helps to understand why politicians have done a fair bit of blah, blah, blahing.

The SMH’s Robyn Harris reported that the Labor leader said he was arrogant ahead of the election and that he “…laments that he allowed his suite of climate change policies to become a choice between the environment and jobs.”

What was the lesson? He ditched the blah and the voters ditched him!

Our recent experience with the Coronavirus shows how there are a lot of people who aren’t prepared to sacrifice for the common good. And it often requires fines, tough lockdown measures and serious restrictions on our freedoms to fix major public problems.

The threat to the climate is a huge public problem. Most politicians now know they have to recognise it as a problem that needs a solution. However, they don’t know what their constituency is prepared to personally pay in terms of taxes, higher prices, the inconvenience of power outages and disrupted business/profits, as well as the potential unemployment for those in the fossil fuel businesses.

The critics of Greta say the idea of green jobs is also “blah, blah, blah” and they’re right in the short term. But, over time, I think there’ll be plenty of green or renewable industry jobs.

But it will take time. And economists like me know when an economy’s structure changes. We’ve seen that with the Internet, — jobs are lost and jobs are gained but there can be periods where the losses outweigh the gains. And politicians are really scared about those consequences.

The seat to watch at the next election will be retired Labor MP Joel Fitzgibbon. That seat covers coal mines and we’re now being told green jobs will replace those lost out of coal mining. It will be interesting to see if that’s a story that voters will buy.

One significant irony is that as the world’s politicians are about to gather in November in Glasgow for a climate change conference, the world is now paying huge prices for it.

Bloomberg told it the way it is with a story this week: “China, the world’s top coal consumer, is in dire need of more supply and is willing to pay any price — a move that threatens to leave less fuel for energy-starved rivals.”

But wait, there’s more, and it puts Greta’s call for action into the real world of what people want. “With winter on the way for much of the world and natural gas prices at record levels, economies across the globe are competing for a finite supply of coal,” wrote Bloomberg’s Stephen Stapczynski, Ann Koh and Isis Almeida. “At the center of the scramble is China, where stockpiles are low and demand is at an all-time high. The dirtiest fossil fuel, which was struggling against cleaner energy sources, is now seeing its biggest comeback ever, complicating international climate talks set to begin in just a few weeks.”

I suspect a lot of real world people, including a lot of young Greta fans, don’t know what might have to be given up to help the planet.

Given my views on humans and what they’re happy to give up, I’m hoping those great lifesavers called scientists, innovators and entrepreneurs, think outside the square and save the planet from its old-fashioned thinking and practices.

Ironically, when predictions of doom are made, they’re always based on the assumption that there’ll not be a technological solution to our planet’s challenges because most of us are blind to what might be.

If you don’t believe me, would you have thought this a couple of years ago? Right now, 32% of all US cars sold in 2030 are expected to be fully electric, according to a June 2021 forecast by IHS Markit!

And who would’ve thought that a UK Prime Minister like Boris Johnson would tell his people that he has set a 2030 target, when 100% of new car and van sales will be fully electric by 2030 (with exceptions for the small number of specialist vehicles where this may not be possible).

It’s about 30 years before we get to 2050. I bet the increasingly greener-loving world will have dealt with emissions issues and technology, working with the great brains of mankind, will be the surprising saviours of the planet.

And Greta, I think the history of human ingenuity when faced with a clear and present danger, isn’t always blah, blah, blah.

Just look at how quickly a Coronavirus vaccine showed up. We were told it would take years but vaccines showed up in the space of seven months.

Humanity can let you down and can be really disappointing, but you should never underestimate it.

Kristina Keneally's candidacy for Fowler represents broader issue in Australian ...
The new tree-hugging Premier & his Treasurer love the colour green
The Premier of the premier state has a huge national job ahead
Will Aussies be flying to Berlin before Brisbane and Tokyo before Tassie?
State-v-state: war looms!