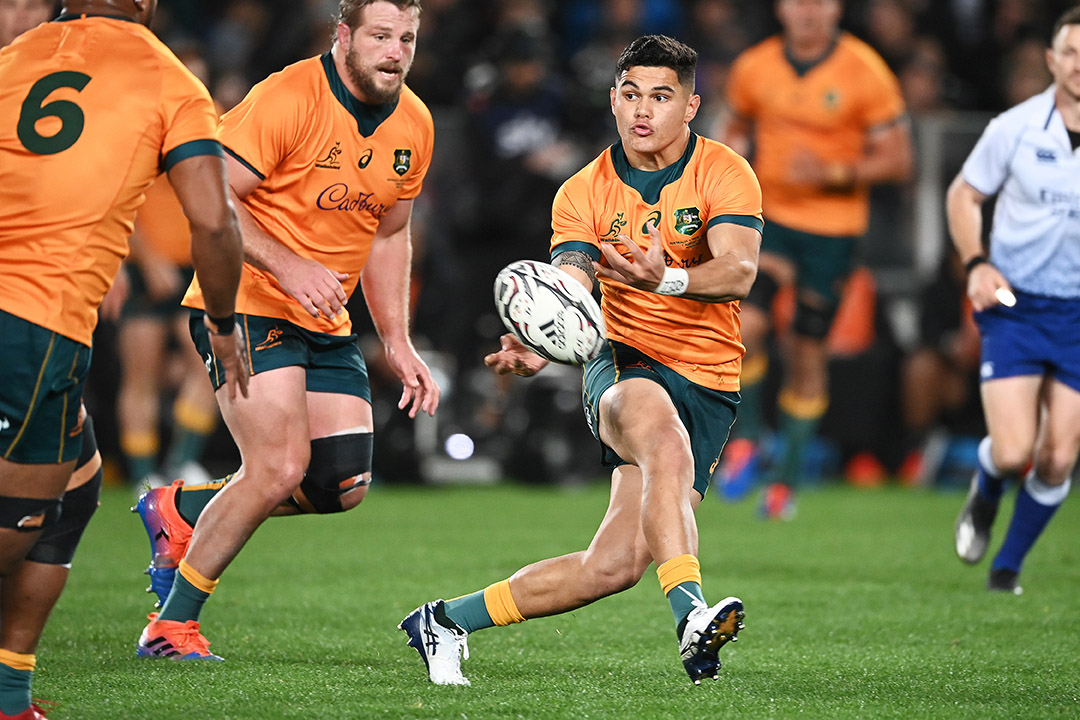 Don't read this if you don't want to win

A sportsman called Noah Lolesio broke a lot of people’s hearts last weekend, and as a rugby tragic praying for a reason to jump for joy when my team wins against the odds, I think I can help him never let me down again!

But don’t think me selfish — I am a part of the paying public who have helped great sportspeople like him, become professionals on fantastic annual pay. What I’m offering is a win-win opportunity for both of us!

After two weeks of sporting celebrations of gold medal Olympic proportions out of Tokyo, which was a real tonic for Aussies in lockdown land, last Saturday brought an on-field tragedy when the All Blacks again beat our Wallabies at Eden Park, Auckland.

We suffered a respectable beating, losing 33-25 — a lousy 8 points!

Before I bring Noah and the tragedy to the fore, let me deal with some history that normal Aussies might not understand.

The All Blacks always seem to clobber us and we haven’t won in New Zealand since 2011! We’ve played each other 167 times with those ‘damn’ remarkable Kiwis winning 116 times, we’ve celebrated only 44 times and they have seven drawn games.

The prize we play for is the Bledisloe Cup and the All Blacks have hogged the damn thing for 18 long years.

And I should throw in (in case you’re not a rugby fan) that the All Blacks are internationally regarded as the best sporting team ever!

Over a century, their teams are so good that big corporations actually learn from what makes this team tick and win.

To get my point, look at this from the organisational performance operation — the PPINetwork. I don’t like cuts and pastes, but this from Mark Thomas of PPI is worth reading:

“Think of truly great sports teams and you immediately think in football terms about Barcelona, Brazil, Holland, Manchester United, Real Madrid, Spain and West Germany. In the USA, they will typically talk about the Cowboys or more recently the New England Patriots. In cricket, you’ll often be drawn to the West Indies or Australian test teams. Canada has its legendary ice hockey team. While in gymnastics you’ll reference the Japanese men’s team. In rowing the Great Britain quad team are often cited as a true centre of excellence. Yet as brilliant as all these teams are they have often experienced significant highs and lows in terms of performance. Many have endured a decade or more of dominance only to subsequently experience a loss of performance and in some cases, extreme crises. An aging team, the loss of key players, a change of coach, a clash of egos or a reinvigorated competitor has often resulted in significant downturns in performance. Yet there is one team that surpasses all the above and which has managed to consistently succeed, decade after decade, at the very highest level.”

“By any measure the New Zealand All Blacks rugby team are the world’s most successful sports team. Famed for starting any game with their highly dramatic and culturally symbolic Haka – a traditional, Maori warrior challenge to the playing opposition, they have amassed a track record that is truly unequalled by any other sporting team. In more than a century of playing, the All Blacks have won more than three quarters of their 538 plus matches to date. In the recent professional era of rugby, they have a win rate of over 86%. Since the beginning of the 2010 season, they have won an incredible 72 out of the 80 matches they played, with a win ratio of 90 per cent. Such is their track record it is often said that the All Blacks remember their defeats more than their victories!”

The All Blacks are a mountain that the Wallabies have to scale and when it comes to rugby and sport generally, we’re talking about greatness. One of the best books ever that anyone who wants to create a winning culture in business, sport or life should read, is James Kerr’s Legacy What the All Blacks Can Teach Us About the Business of Life. I hope Noah and the rest of the Wallabies have read the book too.

But what can I offer Noah to help him never miss kicks like he did last Saturday? I know with my weekly podcast called Learning from Legends that success leaves clues, and in fact it was the great Wallaby captain John Eales, who first said that to me when I interviewed him on my old Talking Business programme that I created for Qantas decades ago! And he was a legend who could also kick.

In fact in September 2008, his team was awarded a penalty on the bell and his kicker was off the field. This was to be a long range kick so he took it and kicked it. You can relive that great sporting moment here:

And while he was an overall legend when it comes to goalkicking, the Poms’ Jonny Wilkinson was without peer on my reckoning. This should be who Noah (and the rest of us who really want to succeed) should rate himself against.

Why? Well, try this.

This was written on the ESPN website before the 2003 World Cup in Sydney.

“If England bring home the rugby World Cup in November it will be the culmination of four years of meticulous training sessions by head coach Clive Woodward - and almost certainly the obsession of one man.

“So paranoid has Wilkinson the perfectionist become that he cannot leave a training session without having slotted six consecutive successful kicks, imagining the greatest prize in the sport depends on each one.”

Let’s go back to that final. The scores were tied between England and Australia at 14–14 at full time, and Jonny Wilkinson kicked a drop goal in the final minute of extra time to win the match.

Relive that great moment for England and another tragedy for the tragic sports person Switz and the rest of the country!

Now to Noah, and this is what he said recently about his training regime:

“I had a very serious thought to myself last year after the season,” Lolesio said in the SMH. “One of my biggest improvements I wanted was my goal-kicking. In the off-season I was really focusing on that.

“I was trying to goal kick three times a week while we were on break and keep carrying that on to pre-season. I’m just happy the hard work I’ve done is paying off now.”

It’s above average to do kick practice three times a week, but I recall in 2003, after that great player KO’d my World Cup dream, that I researched him and found out that Wilkinson kicked 100 goals a day every day, including Christmas Day!

There’s definitely a lesson in that for Noah and the rest of us!

Good luck Noah for today’s game — may the Wilkinson force be with you.