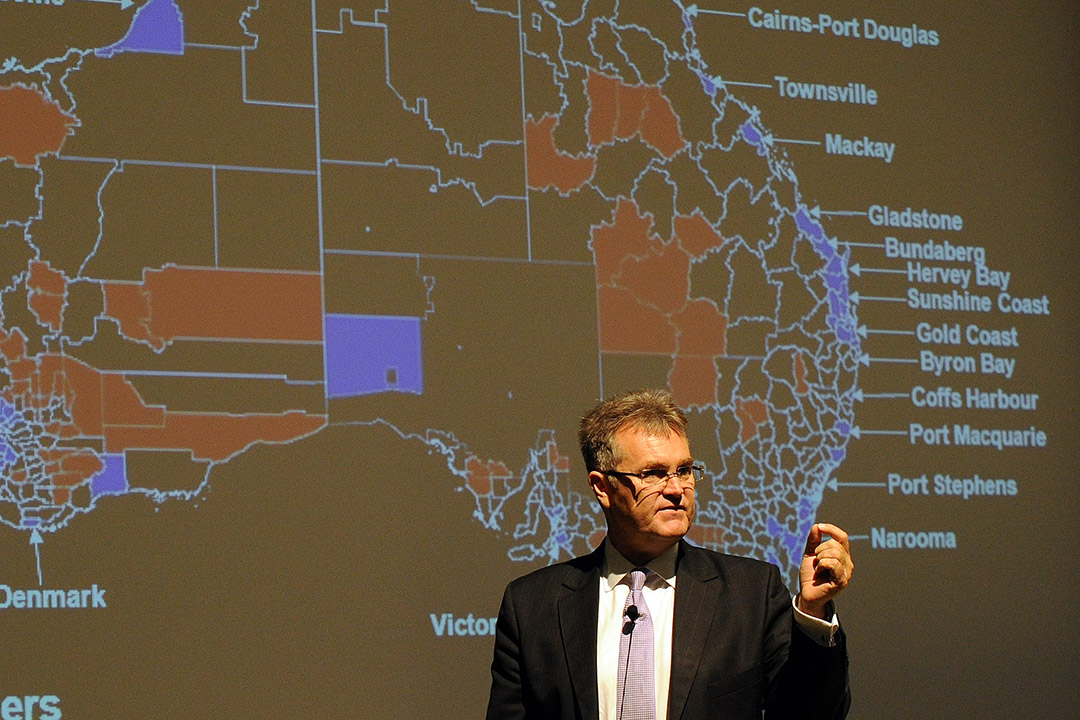 Bernard Salt, the Oracle of Oz, says we need to get ready for a brave new world

This week I chatted with a guy I jokingly call “Mr Australia”, not because he’s a cross between Shane Warne, Hugh Jackman and Bob Hawke but because he studies us and tells us about ourselves. And he became ‘virally’ famous internationally on social media platforms when he made reference to young people and their ‘penchant’ for eating and spending a lot of money on smashed avocado.

His name, of course, is Bernard Salt. I contacted the Oracle because I wanted to know what was going to happen to us and our economy because of this damn Coronavirus and the long-term effects of the blighter. One interesting inclination Bernard sees is that many of us will think about leaving the cities and start putting down residential roots in the bush or by the sea to avoid the closeness of inner-city living.

He also thinks many of us will avoid the cool and groovy urban intimate restaurants, which are Parisian in their ‘up close and cluttered’ ambience. And the world of offices is likely to be less populated, as zoom and a more comfortable online-savvy consumer ultimately changes the economy as we know it. (You can hear that podcast here.)

These revealed and unrevealed changes to our economy will hurt and help different businesses and could have a positive or negative effect on our economy. But the reality of many CBD businesses losing out in a new post-Coronavirus world is bound to hit some sectors and businesses very hard.

Having said that (in case you’ve missed it), we’re seeing some surprisingly OK economic news right now, which some people are either not seeing or believing.

A colleague of mine staggered me about how negative he is about the upcoming December quarter, which I think will be the start of our economic rebound. The September quarter was ruined by poor old Victoria’s requirement to go back into lockdown but we were all surprised by the August jobs report, which showed that unemployment had fallen from 7.5% to 6.8%, when most economists thought it was set to spike to 7.8%!

OK, my colleague has always been suspicious about the statistical competence of the Australian Bureau of Statistics (especially when their numbers don’t verify his often excessively pessimistic take on the economy and humanity generally), but I generally find ABS trend indicators OK. Of course, with the craziness of the current economy, with all the stimulus from Scott and Josh, as well as the official RBA cash rate of interest at 0.25%, maybe it’s a hard time to be the country’s number one statistics person.

Being an optimist, I hope our ABS is spot on when it tells us (as it did yesterday) that:

And all this happened with Victoria’s jobless rate going from 6.8% to 7.1%!

Now the pessimists will say this is all because of the impact of JobKeeper and JobSeeker, which will be reduced in a couple of weeks’ time, and then again from January to March. But nobody knows how the negatives from this withdrawal will be offset by all this money now in the system.

Everybody is guessing but there are some interesting signposts that might help you get more positive, if you’re programmed for negativity or because you’ve been watching or listening to the too pessimistic and often wrong media.

A SMH story earlier this week suggested that a lot of businesses are actually doing better than many of us might think. “The majority of WA businesses are expected to come off the Federal Government’s Job-Keeper subsidy in a little over two weeks, with experts predicting many will no longer meet eligibility requirements,” the story revealed. Nigel Plowman, the founding director of Perth-based accountants and financial advisers McKinley Plowman, said he expected about 75% of WA businesses to come off JobKeeper at the end of September.

“It’s because they will no longer meet the eligibility requirements based on their September-quarter turnover,” he said. “Many WA businesses have largely returned to normal trading conditions. We are seeing many of our clients doing better than they were before COVID-19. The Australian Taxation Office have even suggested that they will be paying particular attention to West Australian businesses claiming JobKeeper after September.”

If the same kind of news reproduces itself in most states (except for Victoria), we could get a pleasant surprise as the economic data for late 2020 and then 2021 churns out.

A part of this improved job creation is linked to another change that the Coronavirus has encouraged, which Bernard Salt sees as being here forever. He admitted he’d never bought anything online but now was a dab hand at it. This new-found skill for consumers like him won’t be abandoned totally when we beat COVID.

Bernard pointed out that the zoom meeting will threaten the profits of airlines, hotels, etc. and that he’d bought a lot of the products he used in my interview (including the lights, microphone and so on) online!

And this is linked to another Coronavirus-impacted development: the big rise in gig economy workers, which, as abc.net.au pointed out this morning, is driven by "non-employees" — self-employed people (owner/managers) with no employees, who work in an unincorporated enterprise (e.g. a sole trader). They deliver your pizza, your online purchases and they’re driving you via Uber. And they’ve grown like topsy as the work-from-home trend exploded. "Delivery drivers and riders of major online delivery services are not employed by their respective delivery companies," Deutsche Bank economist Phil O'Donaghoe wrote in a note to clients. “They are, in effect, 'self-employed' contractors, and would be classified as such by the ABS.

“There will have been a significant increase in demand for such workers, especially in Victoria during the month, given lockdown conditions,” he said.

This is the craziest recession of all time, with jobs actually being created, albeit not as good as full-time ones from a conventional business. And this is a recession where a house in Sydney sold for, wait for it, $95 million! That didn’t happen in the GFC! (Check out the story on Switzer TV: Property here)

Adding to the positivity, the OECD came out this week and told us our economy would contract by 4.1% this calendar year, which is a lot better than the 7% shrinkage in the June quarter. This is a better number than the June forecast by the OECD, which was 5%.

However, they think we’ll only grow by 2.1% next year rather than the 4.1% prediction they made back in June. I’m hoping that the Paris-based think tank is right for this year but too pessimistic for next year. Even if they are right, going from 4.1% economic contraction to 2.1% growth is something to be pretty positive about in what is the craziest recession ever!

Covid round-up!
The long wait for Long WALE is over
What’s ahead for interest rates?
Statins & bananas are strange bedfellows
How much do I need in retirement? Will my super be good enough?