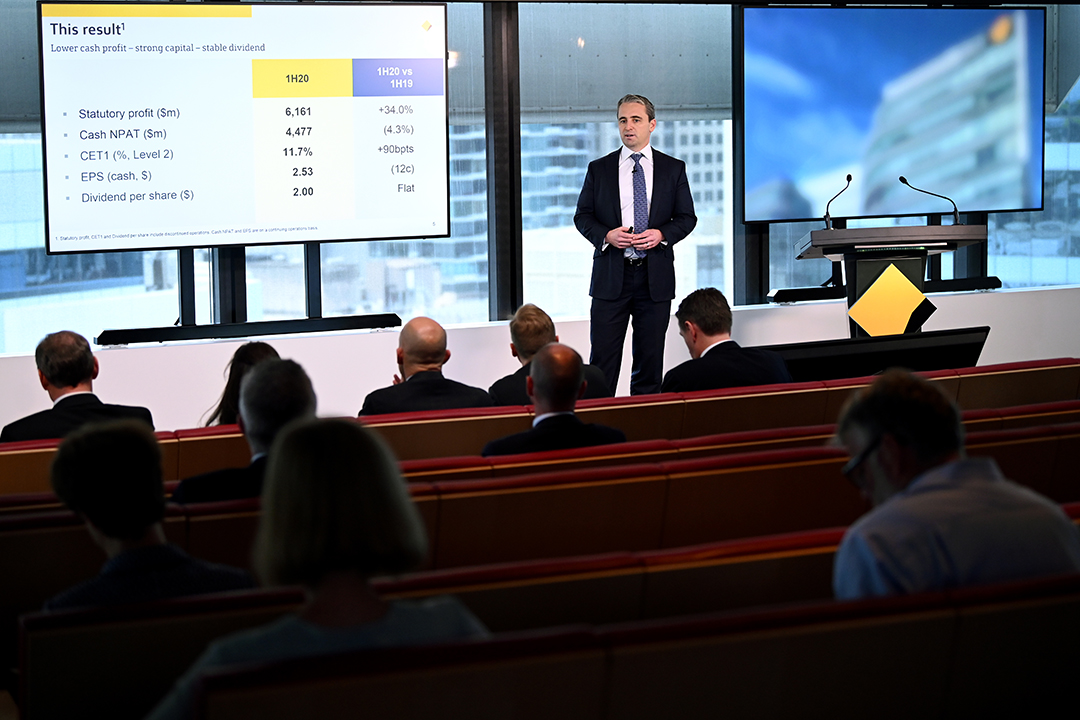 Is CommBank a sell?

The big news coming out of CommBank’s profit result yesterday is that the Bank is set to maintain its annual dividend of 431c per share. The return to the Bank’s target payout ratio of 70% to 80% of cash NPAT (net profit after tax) will be “gradual”.

This is great news for dividend hungry shareholders, and a key driver behind the spike in the share price yesterday by 4.1% to $88.18.

Overall, the result of a cash NPAT for the half year of $4,477m broadly met expectations. Up on the June half year (which had been impacted by customer remediation costs), it was down 4.3% on the corresponding half in FY19. The bank declared an unchanged interim dividend of 200c per share, fully franked.

This represents a payout ratio of 79% of cash NPAT, or 76% excluding notable items. The second half final dividend of 239c per share (expected to be paid in September 2020) will push this ratio above 80%, but CommBank is confident that as notable items recede (chiefly customer remediation and compliance costs), and the share count reduces, the payout ratio can fall back into the target range. Modelling the Bank has done shows that even with an 80% payout ratio, it can continue to generate organic capital and excess franking credits.

On the capital side, CommBank resisted the temptation to announce an off-market share buyback. It will have a surplus of about $5bn capital and CET1 capital ratio of 12.2% when already announced divestments are completed. This is well in excess of APRA’s “unquestionably strong” benchmark of 10.5%.

The Bank did say that it will spend $500m buying shares back on the ASX to “neutralise” the impact of new shares issued under the dividend re-investment plan, and that all options for capital management remain on the table. Future capital management initiatives will aim to “underpin lower share count and the dividend”. With $1.5bn of surplus franking credits post the payment of this dividend, expect more talk of an off-market share buyback of around $2.5bn to $3bn in the next few months.

The highlight of the result was volume growth in home loans, with the Bank growing its book by 4% or about 1.5 times higher than overall market growth rate. To grow for a period of time “above system” is fairly rare for a major bank, particularly when you are the biggest, so this is a noteworthy achievement. CommBank puts this down its speed of response and execution quality when dealing with brokers and home buyers, rather than pricing, putting the other major banks to shame. It also continued to lead the way in digital, adding CommBank Rewards to its number one mobile banking app, launching a home buying app with PEXA that streamlines the process from contract review through to settlement, and a shop now, pay later app  for online shopping with Klarna.

The net interest margin was broadly stable, rising 1bp to 2.11%. Repricing of the asset book  plus a small change in the shape of the yield curve (basis risk) was able to offset the squeeze on deposit margins following the RBA’s rate cuts. The Bank did, however, warn that there were headwinds going into the second half.

But for all the good news, the bottom line result still showed “negative jaws” – expenses rising at a faster rate than revenue growth. For the half year, operating income grew by just $8m to $12,416m (essentially flat), while operating expenses grew by 2.6% or $140m. With bad debts ticking up a touch due to a provision for the bushfires and drought, cash profit fell by 4%.

Noting that there had been some progress on reducing expenses, CEO Matt Comyn acknowledged that the Bank had more work to do. Flat expenses in nominal terms remains a goal, although with a 400 increase in headcount over the period, this will require extraordinary discipline and focus.

Where to for CommBank?

The broker analysts also thought the stock expensive. According to FN arena, the consensus  target price was $73.41, a whopping 16.7% below Wednesday’s closing price. While   upward revisions to broker target prices are likely in the coming days as the analysts re-crunch their numbers (surprisingly, they don’t like being wrong for too long), this all said and done, CommBank will still be trading at a considerable premium to its peers.

I am not down on CommBank – it is head and shoulder above its major banks competitors in terms of core franchise strength, technology and leadership – but the premium difference is material and in an industry which is dominated by four major players essentially employing the same strategies, mean reversion shouldn’t be discounted. CommBank is not a sell per se, but I do think that for the medium term, CommBank is a sell to buy Westpac or one of the other majors.