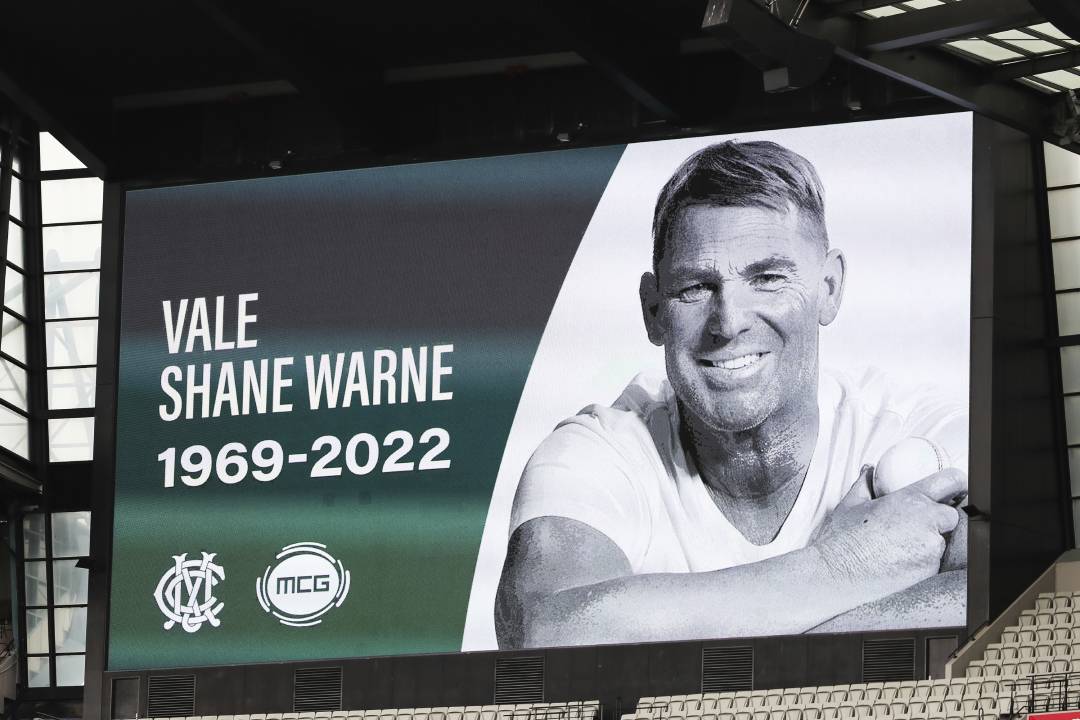 Friday, March 5, 2022 will always be remembered as a tragic day in the world of cricket with the deaths of two Australian cricketing legends - one of Australia’s greatest wicket-keepers, Rodney Marsh, who died at the age of 74 following a resuscitated sudden cardiac arrest a week previously, and the sudden death of, no doubt, the greatest spin bowler the world has ever seen, Shane Warne, aged 52, suffering a heart attack whilst holidaying in Thailand.

When sporting legends die, especially at such a relatively young age as Shane Warne, our nation is deeply shocked and goes into mourning.

Many people ask, how can this happen? There are many people who falsely believe that sports, and in particular the exercise associated with sport, affords people magic protection against mortality.

I would see both these tragic deaths as a timely reminder to all of us that the best treatment of all modern diseases is not to get them in the first place i.e. prevention.

Almost all cardiovascular disease can be prevented if detected early and there are now very accurate cardiovascular screening tests that are available freely to us all that can detect early disease with preventative management, if necessary, commenced immediately.

The commonest cause of cardiovascular disease is atherosclerosis, the progressive build-up of fat, inflammatory cells and calcification in the walls of our arteries over decades occurring long before the plaques rupture to cause acute vascular syndromes such as heart attack and stroke. The vast majority of people living in the modern world develop some degree of atherosclerosis as they age and clinically this takes decades to develop. Most, but not all, people with this form of heart disease do not present with heart attacks until after age 50.

Firstly, let me make the point that atherosclerosis is all genetic but as I have said repeatedly, it is your genes that load the gun and your environment that pulls the trigger.

The insulin resistance gene is a survival advantage if you’re a hunter-gatherer but a survival disadvantage if you live in modern society. This gene allows you to store fat around the belly after a big feed to tide you over until the next few days until another “kill” where you need to consume the beast immediately.

In the meantime, you wander around the jungle looking for more food but often go without a decent meal for a day or two. In modern society, we have breakfast, lunch and dinner and typically sit on our backsides all day in sedentary jobs. This gene is present in 30% of Caucasians, 50% of Asians and close to 100% of people with darker or olive skin. Thus, when anyone with this gene is exposed to modern living, it is very common to develop diabetes (or prediabetes), high blood pressure, specific cholesterol abnormalities which include high triglycerides and low HDL, along with abdominal obesity. All of these factors combined or, even in isolation, predispose the individual to cardiovascular disease and a number of other common health conditions.

People with insulin resistance are also more likely to suffer fatty liver, gout and even have an increased risk for cancer.

Two or more of these factors combined are known as metabolic syndrome, which is the commonest genetic syndrome in the world and, as I’ve stated, accounts for 70% of heart attacks.

There are two commonly used tests in medicine that I believe should be abandoned as they do not advance the diagnosis and management of insulin resistance and its manifestations.

The first is insulin levels. As your pancreas starts to fail, your insulin levels drop and that’s precisely when the more significant manifestations of insulin resistance start to rear their ugly head. Thus, normal insulin levels may give you a very false sense of security. Even more useless is the glucose tolerance test which is two hours of your life you’ll never get back!

To make a diagnosis of insulin resistance, you need a combination of two or more of the common clinical features mentioned above.

The tests I perform here are:

The purely genetic Lipoprotein(a) is the cause of a further 20% of atherosclerosis, related cardiovascular disease. 1 in 5 people around the world have an excessive level of Lipoprotein(a) in the bloodstream which places them at a 70% higher risk for heart disease. Unfortunately, this simple test is not routinely performed by most doctors. As it is purely genetic it is a common reason why someone who practices healthy lifestyle principles still experiences a premature heart attack.

Up until recently, there have been no specific treatments for Lp(a) but this is changing with recent trials of a monthly injection of a drug that prevents the production of Lp(a) in the liver with very promising results.

I have been managing elevated Lp(a) for over 25 years with a combination of inexpensive, safe vitamins and the somewhat difficult to use immediate-release Vitamin B3 preparation, nicotinic acid.

Confirmatory tests are always vital to confirm the diagnosis. I routinely perform the tests as outlined below.

Coronary Artery Calcium scoring (only in patients without a prior history of heart disease) is the most accurate predictor of cardiac risk. Coronary calcium scoring provides a picture of the coronary arteries, which is a surrogate marker for the accumulation of fat in the arteries over the decades up to the point of scanning. The great value is that coronary calcium scoring is quantitative.

The scoring ranking is as follows:

A Calcium score > 400 predicts somewhere between a 30-50% ten-year risk, depending on other risk factors present, making it a much stronger risk predictor than looking at other risk factors in isolation such as cholesterol levels, blood pressure, diabetes and cigarette smoking.

The calcium itself is not the problem. In fact, calcium is used by the body as a strengthening agent. The commonest site for calcium is, of course, in the bones, to make the bones stronger. If the body detects an area of weakness, such as fat build up in the wall of the artery, it will send in calcium to act as a scaffold to make the artery stronger so it will not break down. Unfortunately, if you continue to bombard your arteries with modern living, the fat continues to build up in the wall and thus the calcium builds up, attempting to stabilize the fat.

Calcium is very easily seen and measured by a CT scanner and therefore is a very good marker for the degree of fat you have in your arteries. Let me also make the point that calcium in the arteries has nothing to do with the calcium you take in your diet. There are, however, some studies suggesting a link between increased cardiac risk and oral calcium supplements which have now fallen out of favour in most circles for the management of osteoporosis. There is a very strong link between low Vitamin D levels (Vitamin D being a very important controller of calcium metabolism) and a higher risk for heart disease.

Coronary calcium scoring is low dose radiation, usually less than 10 chest x-rays and relatively inexpensive. It does not require any injections and its results are very reproducible.

At this point, I would like to make a comment about virtual angiography, otherwise known as intravenous coronary angiography. This also uses a CT scanner but is not the same as coronary calcium scoring. It does involve an intravenous injection with dye and there is also a considerable amount of radiation with most standard machines involved with this technique. It is my strong opinion that it should not be used as a screening test for heart disease but does have other utilities which are outside the scope of this article. A recent study published in the Journal of the American College of Cardiology has shown that the coronary calcium score is a better predictor of risk for heart disease than CT Coronary angiography. If you ask your GP for a referral for a calcium score and the radiology practice comes at you with a needle - it is the wrong test and tell them to STOP!

It is my opinion that the majority of people living in modern society should consider having a coronary calcium score at some stage in their middle age. For men, I suggest somewhere between 45-50 years old, for women 55-60 years.

The reason for the age difference is that women tend to lag ten years behind men in their coronary risk. This is usually because of the hormonal protection afforded by oestrogen and progesterone. When women commence menopause, their risk for heart disease significantly increases.

I perform what I term advanced cardiac pathology, which involves the following blood tests:

A recent trial from Holland known as the MORGEN study demonstrated clearly that if you followed the five keys to being healthy you reduce your risk for cardiovascular disease by 83%. If you then include appropriate genetic screening such as Lipoprotein(a) and take steps to control this issue, then we will see the rates of cardiovascular disease plummeting.

Over the years, there have been a number of studies demonstrating reversal of cardiovascular disease but this is not a passive process purely involving pharmaceutical therapy and medical procedures, it requires enormous responsibility on the part of the patient to completely rearrange their lifestyle, follow appropriate medical advice and take high-quality supplements.

I have been practising medicine for over 40 years and during this time I have seen numerous patients stabilise and often reverse the disease with this integrated approach to their care. It does require a lifelong commitment to being healthy and working with a trusted medical practitioner. Unfortunately, for a variety of reasons, the majority of people can’t or won’t change their lifestyle or be compliant with medical therapy and supplementation.

One person dies every 20 minutes in Australia from some form of cardiovascular disease. The only way to stop this carnage is to adopt the comprehensive approach as detailed above.

The Walker rule Number One of Medicine is very straightforward: “the most important coronary arteries in this world are your own, if you’re not prepared to look after them why should anyone bother to help you”.

Take the first step now and see your doctor to start this process.