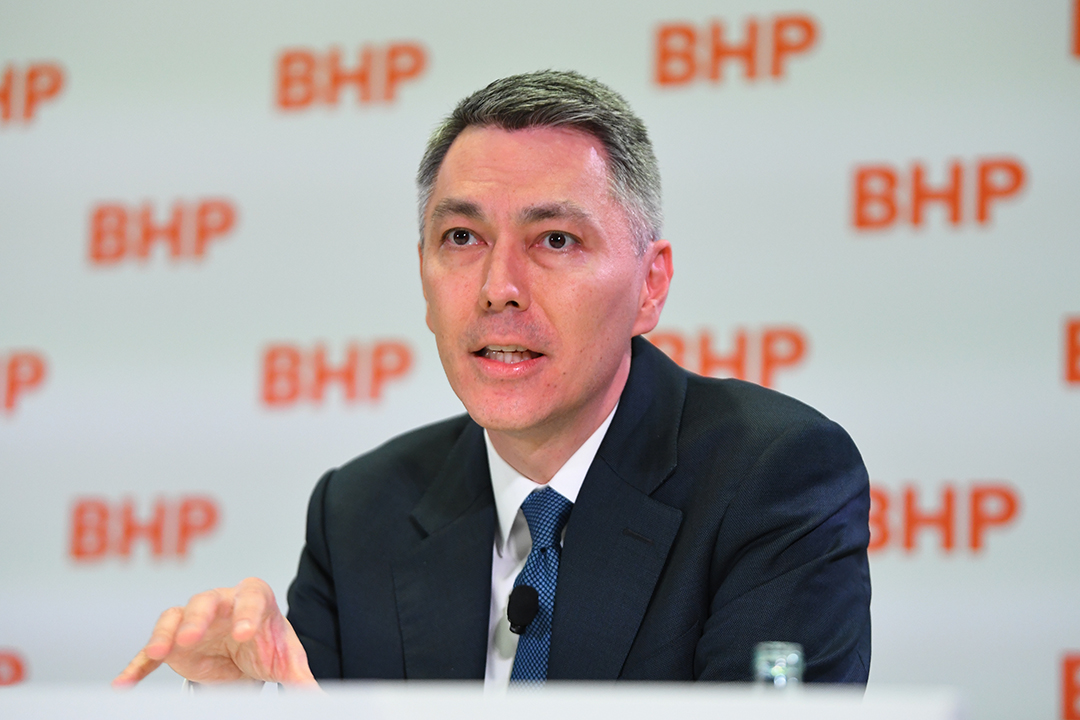 Where is BHP heading?

BHP’s newly appointed CEO Mike Henry was always going to feel a bit like Santa Claus with a nearly empty bag surrounded by hopeful children, given how much the company has paid out in dividends in the last few years.

The giant miner turned in a very impressive half year profit yesterday of $US4.9 billion, up 29%, which translates to an eye-watering $7.25 billion in local currency.

That result went down well with the overall market, pushing the share price up 37 cents to $38.84 on an otherwise lacklustre day for the local bourse.

But Henry had to dress up the US65 cent interim dividend as “the second highest ever” because the payout for the first half of calendar 2019 was US78.08 cents.

The dividend for the previous corresponding period, the December 2018 half, was US55 cents.

That latest number was eminently sensible by any hard headed analysis, representing a payout ratio of 63%, but that was below some analysts’ forecasts of a 65% ratio and/or US71 cents.

It’s hard keeping everyone happy, particularly when a lot of retail holders look back sentimentally at the $US1.02 special dividend they picked up at the end of 2018.

That was on top of a share buyback that was classified as a fully franked dividend, and you know what retail investors think of those.

That was all relating to the proceeds of BHP’s withdrawal from the onshore shale oil and gas business in the US in 2018, which incidentally provided shareholders with a total cash return of $US21 billion over two years.

No wonder there’s still something of a cargo cult mentality at work among the many Australian shareholders who depend on the likes of BHP to help their retirement along.

Well, tough. This is the new regime and it’s no less careful than Andrew Mackenzie’s was. Remember his laser like focus on costs?.

What jumped out of Henry’s presentation yesterday morning was the KISS principle, as in ”Keep it Simple, Stupid”, referring to BHP’s focus on world class assets, particularly in iron ore in WA and copper in Chile, rather than playing around in potentially exciting greenfield sites that might or might not produce a gusher of earnings in the future.

As Henry said, the company is “in good shape” but his presentation was all about improving productivity and cutting unit costs rather than being adventurous.

The big push in Chile is to start copper production from the Spence Growth Option, as it is called, and to start generating their own electricity there and at the massive Escondida mine.

CFO Peter Beaven caught the mood by noting of the generating plan  “It’s not only right, it’s earnings accretive,” he said.

The company had to write down $318 million, partly because of continuing remediation after the terrible Samarco dam failure in Brazil in 2015, and partly because of the cancellation of a power contract with a Chilean provider.

What’s clear is that management are dead keen on ensuring an absence of nasty surprises, and the latest half year result is in line with the company’s earnings guidance for the 2020 financial year.

Coronavirus is clearly top of the list of immediate concerns, given how Chinese demand for West Australian iron ore is by a long way the single biggest earnings driver the company has.

BHP earned a staggering $7 billion in revenue from its iron ore operations in the half, with a margin of 69%. In other words, for every dollar they earned at the operating level, they kept 69 cents. Iron ore represents a whacking 60% of group EBITDA, (earnings before interest, tax, depreciation and amortisation), which is three times what it earns from copper.

(Of the other two major products, Petroleum provides 13% and Metallurgical coal 9%.)

The actual tonnages haven’t changed a lot. The half year production numbers published at the end of January noted that while iron ore production was up two per cent “half on half”, it was actually down 1% “quarter on quarter” because of a major ore wagon dumper maintenance program in October of 2019.

If you think that ore train derailment back in January last year was a problem for the company, it was a drop in the bucket compared to what would happen if a rotary car dumper went on the fritz. You can’t bulldoze that wreckage out of the way like you can two locomotives and 245 ore cars, each carrying 100 tonnes of ore, which is exactly what they did.

As far as China and the virus goes CFO Peter Beaven bravely stated, “we’re ready for whatever happens”, making it clear the company will use the reduced demand for iron ore that must follow Coronavirus to build up a stockpile buffer at this end, thus allowing mine and rail maintenance programs to step up.

Where is BHP, meanwhile, with the vexed question of what to do with its thermal coal assets? Metallurgical coal isn’t going anywhere as it’s still needed to make steel, but thermal coal for electricity generation is what they used to call a drug on the market.

BHP has thermal coal mines in Australia and Colombia but Mike Henry made his view crystal clear.

“If somebody presented us with the opportunity to exit for value, we would consider that.” he said.

Macquarie stated last year that those Australian coal assets were worth around $600 million and the Correjon business in Colombia at around $1 billion.

Henry’s comment sounds like a request for the accountants to devise a written down value for the assets. After that, value, like beauty, will be in the eye of the beholder.

Could Vonex be the next big telco stock?
Will cannabis stocks get back in the green?
Why are investors ‘Crazy about Kogan’?
What’s the difference between work-life balance and work-life integration?
Will the big banks kill Afterpay and Zip's share price?