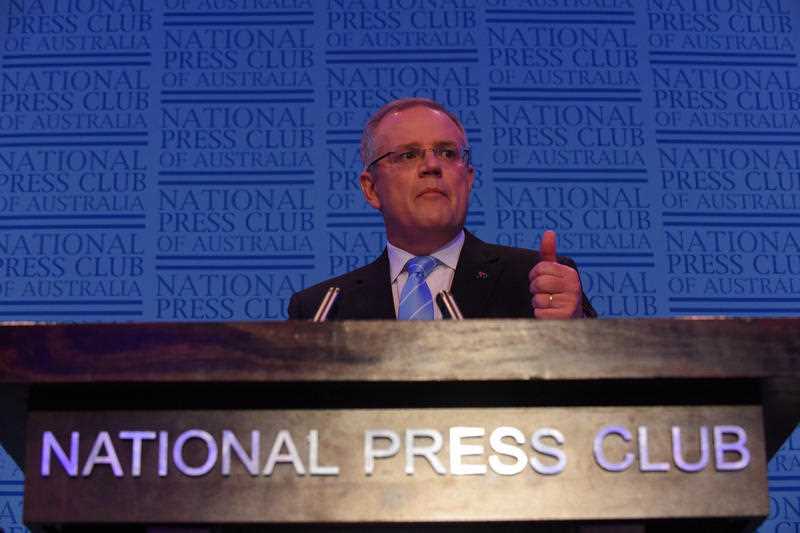 A psychologist could easily ask: what’s wrong with Leigh Sales? The ABC’s gun interviewer on the 7:30 Report suffers from an increasingly noticeable inclination (noticeable in many current affair journalists) towards something that borders on anger management and ADS — attention deficit syndrome!

The Fairfax press hailed the interview of Treasurer Scott Morrison as a “blistering critique” of his Budget but her first question was more than that. This is what she asked: “What was the point of your three years in government? And why should voters re-elect you?”

That wasn’t a critique. It was simply rude questions and rates alongside Sarah Ferguson's equally rude question to Joe Hockey, after the 2014 Budget, which went like this: “Now, you've just delivered that Budget. It's a Budget with a new tax, with levies, with co-payments. Is it liberating for a politician to decide election promises don't matter?”

Maybe I’m wrong. It was probably less rude than Sales' effort but you can see the pattern. Rudeness has become popular when it comes to Treasurers and Budget night.

Don’t get me wrong. Ms Sales is a great journo and interviewer, who has stepped up to the job of replacing Kerry O’Brien admirably. However, based on her own example, she too should be open to a blistering critique from a taxpayer. She is, after all, a public servant on our ABC.

(Gee, I hope I don’t leave myself open to being accused of being a misogynist?)

But something that really annoys me more than this new age of rude journalists is the fact that Treasurers let these people get away with their pithy, smart Alec questions, which have simply been created to make current affairs entertaining and their practitioners virtual rock stars.

In the good old days, Treasurers like Paul Keating would’ve ripped into Sales and Jackson. Anyone who can remember the battles between Mike Willesee and Bob Hawke, or Keating versus Richard Carleton, can remember a time when pollies didn’t take ‘crap’ from headline grabbing journalists.

Here’s one of my favourites from Keating to Carleton, after a rude question when the great journalist had gone to the Nine Network: “You had an important place in Australian society on the ABC and you gave it up to be a pop star ... with a big cheque ... and now you're onto this sort of stuff. That shows what a 24 carat pissant you are, Richard, that's for sure.”

Now that was entertainment!

Let’s return to the Sales interview to see what Morrison said and maybe what else he could have returned fire with.

To her first question, this is what he came up with: "In particular, 300,000 jobs were created last year. More than 50,000 young people were able to find employment. Youth unemployment is lower than it was at the last election. We work to keep spending under control and we will receive the deficit reduced to $6 billion as a share of the economy.”

This wasn’t bad but he could’ve talked about other changes, such as the border policy, which means 1,200 people are no longer drowning at sea, which is a policy now supported by Labor.

The trade policy initiatives of Andrew Robb are pretty significant and should be huge economic game changers in the future.

He really should’ve had a list of important achievements but could have pointed out that the 2014-15 Budget was repelled by a Senate run by Labor, the Greens and the weird mob with links to Clive Palmer and the motoring enthusiasts of Australia!

If I were in Scott’s shoes channeling the rude and combative nature of Paul Keating, I would’ve slammed Ms Sales for her lack of economic knowledge. By the way, this is not just her problem. Most of the country’s political commentators don’t know a lot about the economy. How do I know? I’ve worked with them for three decades! They rely on the analysis of the likes of Terry McCrann, Ross Gittins and even me, so it becomes a smorgasbord approach, where they cherry pick what suits their bias. Objectivity is always the casualty.

To other issues raised by Sales, such as why government spending is not falling quickly enough, the Treasurer simply should’ve said “blame the Senate”, which he did when I interviewed him yesterday. He also could’ve said that nut case economists were talking about a recession here two years ago, so we could hardly have shut up shop and caused a recession. The Joe Hockey small business offset and the lower dollar were two reasons why our economy is now growing at 3% or so.

Keating might have thrown in “Leigh, you could do with an economics refresher course before you take on a job like this.”

On that subject, why would she question 3% growth? Why does she assume the RBA’s rate cut was because the economy is weak? It could easily be a currency play, when a 10% slump in petrol prices and an 11% drop in fruit prices have created an odd quarter of deflation.

Morrison should have let rip on the fact that we are growing faster than the US, the UK, the Eurozone and most other comparable countries and we’ve just gone through the collapse of the mining boom.

We Australians too easily join the pity party propagated by our media players looking to peddle bad news for ratings and significance.

Tomorrow, I’ll give you the latest snapshot of our economy and it’s a lot better than what was implied on the 7:30 Report.

Politicians need to get on the front foot and start talking up our economy, our achievements and why we need an election result where the winning party — be it the Coalition or Labor — has control of the Senate.

That’s right. I’d rather see Labor with a sensible, supportive Senate so there’d be no excuse for a Government and a Treasurer to make excuses about why there has been no progress on the deficit, spending cuts and debt.

Leigh Sales isn’t the problem. We are! We vote in crazy Parliaments and then get virtually powerless Governments and second-rate outcomes.

We need a better GST to bankroll spending and tax cuts but ignorance and Labor scare campaigns supported by the media mean we’re not getting any progress Budget-wise.

If we vote in the same silly Senate and the same weak Governments, then Moody’s will lower our credit rating, interest rates will rise, the economy will slow, unemployment will rise and the host of the 7:30 Report will keep asking rude questions of Treasurers.

We need a leader who can bring the country along on a road of reform. At the moment, I wonder if Malcolm is doing enough to pull it off.

He really needs an Obama-like election campaign so we all start to believe “Yes, he can!”

On what we've seen to date, Malcolm is no Obama (or Bob Hawke) when it comes to wooing people but for the sake of the economy and the Budget bottom line, we certainly need one.

Finally, if I can’t have a charismatic leader who wins over the people and reforms the economy, at least I hope I can get some politicians who give as good as they get from the likes of Ms Sales.