Today marks Glenn Stevensâ€™ last official speech as the Reserve Bank Governor and the media will be all over this momentous occasion.

I’m hanging out to hear every word today from one of the less exciting men I’ve ever encountered. His entertainment factor aside, I respect him and as it’s Glenn Stevens’ last official speech as the Reserve Bank Governor, the media will be all over this momentous occasion.

This is an historically significant speech for the history of the Reserve Bank of Australia, which has been in existence since only 14 January 1960, when it took over from the Commonwealth Bank! Of course, in those days, the CBA was owned by the Commonwealth of Australia (or really, the taxpayer!)

Glenn took over from Ian Macfarlane in 2006 under the Howard Government and before the 2007 election, he showed his ‘rocks’ by actually raising interest rates just before polling day. This is how the SMH reported it at the time in November 2007: “The Reserve Bank has made history, weighing into the politically-charged federal election campaign by raising interest rates to their highest in a decade. In a widely anticipated move, the bank lifted the official cash rate by 0.25 percentage points to 6.75 per cent this morning - the first time it has moved rates during an election campaign.”

Stevens made history with that move and it was one that I’m sure made the then PM, John Howard think about the use of the f-word! In fact, he has told me that it was not something he was celebrating, given his then battle with an excessively popular Kevin O7 Rudd.

Glenn was never afraid of rate rises and was still doing it in early 2008, when the stock market had made its first leg down in the GFC. At the time, I gave it to him in my column in The Australian.

I’d heard a UK-based economist, Pippa Malmgren, who had served as Special Assistant to the President of the United States for Economic Policy on the National Economic Council and was a smarty. I’d been pondering the wisdom of rate rises after a pretty big fall of the stock market but Lehman Brothers hadn’t failed then, so the crisis wasn’t as dramatic as it would become.

I wrote at the time that Glenn and his RBA would have to, as Pippa put it, “turn on a dime” and start rate cutting because she could see a lot of ‘you know what’ coming down the road. Boy was she right and boy was Glenn off the pace!

Later in the year, however, when Lehman Brothers failed and the GFC problems were more apparent, he was the first central banker to cut rates and his governing of monetary policy along with the Labor Government’s fiscal efforts actually stopped us seeing unemployment go over 6%. The Yanks saw 10% unemployment, the Poms went to 8.5%, while the likes of Spain saw a 25% jobless rate.

I also took issue with Glenn and his team when he kept rates too high for too long in 2011. And I drew some heat out of viewers to my TV show for being too hard on Glenn but as I later argued that once he got it, he was a man of action.

The chart below shows what has happened to the official cash rate since the GFC. What we see is that our rates’ life has changed substantially. While we love low home loan interest rates as mortgagees, they are now too low and it’s high time that a normal economy re-emerges. This is why every word Glenn utters today will be put under the economists’ microscopes. 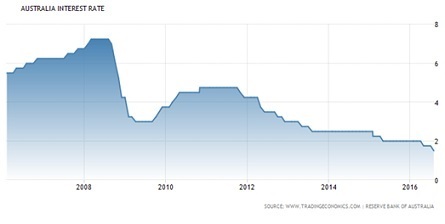 Yesterday, the NAB’s chief economist, Alan Oster predicted the cash rate, now at 1.5%, will see two more cuts to 1%. After that, we might see unconventional monetary policies, such as increasing the money supply, but I really hope he is wrong.

If he’s right, then we’ll be stuck in an economic nowhere land, with low growth, low rising wages, low levels of business investment and basically more of the same that we've seen in recent years!

If this is right, we shouldn’t need two more rate cuts. If, however, you look closely, you can see 2017 was not really clearly referred to in this statement. You’d hope if Oster is right that the two rate cuts would set us up for 3-4% growth in 2018 but I just don’t want to imagine two more years of very slow economic improvement, which means more rate cuts.

Glenn, tell me it isn’t true!