The US Fed meets this week, and if they raise rates, there could be a big stock market sell-off because the market doesnâ€™t expect it. So should you be nervous?

Eight years ago last Friday our time, Lehman Brothers filed for bankruptcy and the GFC started in earnest. The stock market slid from 5118.3 on September 1 to 3145.5 on 6 March 2009, when the bounce back of stocks began.

That was scary stuff, but even scarier for those who panicked and went to cash because they might have got 7% in term deposits then. If they’d stuck with a portfolio that had performed as well as the index, they would’ve seen the index at 4870.6, which was 54%! (Note: if a stock market falls 50%, it needs to rise 100% to get back to where it started. So the 54% bounce back was good, but it didn’t take your portfolio back to where it was before the crash.)

Stock markets are strange beasts and there was scary talk around that a Great Depression was coming. And one could have come, if the repair jobs from the US, Chinese and the likes of the Australian governments, along with the expansionary monetary policies of the central banks, hadn’t followed.

Combined, these policymakers threw money at the problem — this huge problem — and the Great Recession happened in the US and most economies but we missed out! We were rescued by Chinese stimulation, the related mining boom and Government policies that turned a Budget Surplus into a Budget Deficit and took government debt to GDP from around zero to 36.8%.

I know there’s a lot of handwringing over our debt and it’s great that Labor gave into the Government on the $6 billion omnibus bill. And it’s tipped that Bill’s mob will pass the super changes, which will all help us get the debt to GDP ratio down. All we need then is to see the world economy grow better, our economy keep growing at 3% or better (which we’ve done for the past two quarters that have been reported on by the Statistician) and then private debt to GDP, which is big, will come down as well.

Low interest rates, which are expected for longer, and a growing economy, will take away this debt problem and national worry.

You know, in the 1950s, our government to debt was around 130%. So how did we get rid of that? The answer was simple — economic growth and low interest rates. 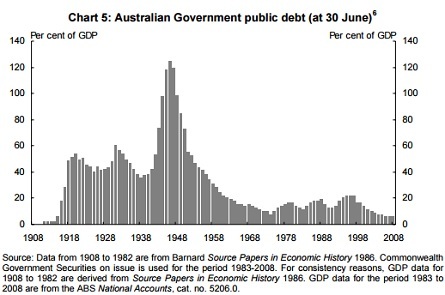 So why the history lesson on debt and interest rates? Well, there are couple of reasons.

First, the US central bank meets this week — September 20-21 — and if they raise interest rates, there could be a big stock market sell-off because the market doesn’t expect it. The latest market calls on a rate rise on Thursday from Fed watcher CME Group was 15%, up from 12%. However, this was before some weaker-than-expected economic data on Friday. This is what showed up:

Few expect the Fed to raise. I don’t. Last week, however, Goldman Sachs and Barclays did, so it could happen. Talk about it a week ago sent the Dow down 394 points, so if it happens this week, I’d say the market could lose 500 points and for a few days it could feel like a stock market crash.

If it happened, news outlets would talk about a $100 billion wiped off the value of shares and I’d become really, really important to all of my news buddies at Sky News, 2GB, ABC, etc. And what would I say?

The stock market is nervous about a rate rise, but the Fed wouldn’t do it unless the US economy was ready for it.

It is, but there is a US election coming where Donald Trump might now win and US economic data got a little wobbly lately, so I think the Fed will wait.

But if I’m wrong, then stocks will fall big time, so hold your breath until Thursday but reserve your panic for some time in 2018 or later. So watch this space!

P.S. Today I start a new radio show Monday-Thursday on 2UE between 4-5pm and the goal of the show is simple — let me make you richer. Tune in if you can and you want that to happen!