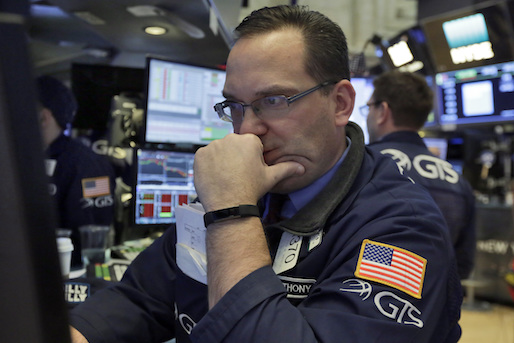 A bit of panic is expected after the Dow Jones Industrial Average gave up a ‘big’ 665 points by the close of trade on Saturday morning our time.

Primarily because our stock market influencers are generally gutless wimps, who as a matter of caution nearly always follow Wall Street’s lead, I expect our stock market will start off dropping today.

One friend’s reaction to the sell off was to ask me: “What’s behind the crash?” I did gently respond that it “wasn’t really a crash.” She then started again by asking about “the correction?”

And respectfully, I explained a correction is a 10% or more fall.

Like many, 665 points looked potentially scary and though her husband said he was relaxed with the sell off, like all smart wives, she needed to test out her husband’s complacency.

This was a rare time when the husband was right!

That said, my friend’s concern was not unique, with a journalist from CNBC running with the headline: “A drop of more than 600 points in the Dow is very, very rare.”

So let’s put this Wall Street drop into numerical and historical (not hysterical) context. This 665 point loss came with the Dow over 26,000 points, so the percentage drop was only 2.54%.

This is a long way from the reactions to the potential economic Armageddon scenarios that were showing up in 2008. And a 665 point loss is still noteworthy but it doesn’t send the same “it’s time to panic” messages that it said in 2008 (with the GFC threat) and in April 2000 when the dot.com market crash was in train. Then it was a 617 point crash but the Dow was only around 11,000, and that was a 5.66% loss.

This crash was connected to the unrealistic valuations on high-tech companies, which had been priced on potential but had not really proved the longevity of their model. Right now, there is definitely some over valuations of plenty of companies but it’s nothing like the bad days of the dot.com boom.

So what happened on Wall Street at the end of last week to cause a 665 point loss?

• This made bond market experts think US interest rates might rise quicker than expected.

• Companies such as  Exon Mobil and Chevron reported worse than expected. Also, Alphabet (Google) and Apple had sell offs and these hurt stocks but generally US reporting season has been better than expected.

• And because the Dow was up around 25% over 2017, the market is way overdue for a pullback and this is what this is.

A 2.54% drop is not a 6-7% slump, so we have to keep all this in perspective. You have to remember that we are currently living through the best synchronized growth of the global economy in decades.

The US is growing strongly and has just received the good news that the Trump tax cuts are coming. This adds to growth but it adds to expectations that inflation and therefore higher interest rates are coming.

These will eventually choke off this bull market but now is not that time. Mike Baele, the managing director at U.S. Bank Wealth Management said to CNBC after the jobs data: “The key for the market today is rising interest rates.” He then pointed out: “The old adage is: ‘Bull markets don’t die of old age, they are killed by higher interest rates.’ That looms large.”

This bull market, I reckon, has at least two years left, maybe more, but we have to get used to these more scary days coming out of Wall Street. It’s called “climbing the wall of worry” and that’s what stock markets do until they don’t!

Right now, the wall is still ‘climbable’ and that’s what I expect will happen later in the week when this sell off creates another buying opportunity for the people out there who believe this story that I’ve just sketched out for you.