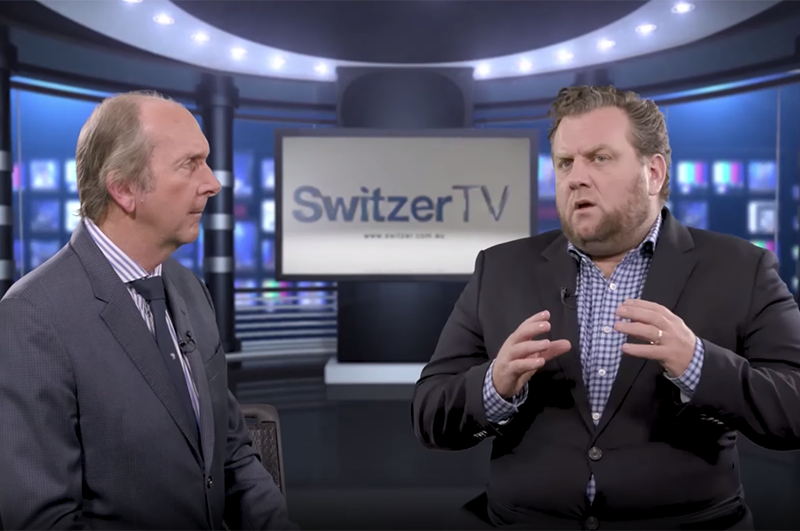 What’s the greatest lesson you can teach yourself or the ones you seek to influence? The answer occurred to me as I listened to Chris Joye, as I interviewed him for our latest episode of the Switzer TV programme. The theme I explore is just how scared should we be about the stock market sell off, the threat of an inverted yield curve in the bond market and a related recession?

I put these issues not only to Chris but my other guests — Julia Lee from Burman Invest, Charlie Aitken from Aitken Investment Management and Paul Rickard, who writes for our Switzer Report. As you know, Paul was the founding CEO of CommSec and my business partner.

These people have been around the block lots of times when it comes to stock markets and the forces that can send them up and down. I wanted to know if they’d been influenced by the messages the bond market has been transmitting.

Julia Lee might have some short-term reservations of where the stock market is heading but her outlook for stocks remains positive. She was quick to point out that even if the bond market is right, it can take 18 months or more for a recession to show up. And in that time, the US stock market has had big rises.

Percy Allan, the former NSW Treasury boss, told me on my Switzer Show podcast, that the stock market rise has averaged around 16% after the bond curve inverted in the USA. He also pointed out that even if the bond curve was on the money, there was time to remain long stocks and to make money out of them.

Percy founded a service called Market Timing Australia, which we now run. Market Timing has been supporting gold investments since May because the momentum of the gold market had been building until his monitoring indicators could ignore it no longer. However, despite the potential threat that the move towards gold suggests, his other indicators still give a ‘thumbs up’ to Australian shares.

Paul Rickard, who started his money life as a bond trader, accepts that the bond market has some predictive form but says it’s not in the infallible class.

He agrees with Dr Shane Oliver of AMP Capital, who says the bond curve warnings have a history of unreliability here in Australia. “The gap between the 10-year bond yield and the cash rate, which is the part of the yield curve that has been traditionally focused on in Australia, has given numerous false readings – most noticeably in the mid-1980s, in 2000, 2005 to 2008 and around 2012, that were not associated with recession in Australia,” he said. (AFR)

Joye, the Co-Chief Investment Officer at Coolabah Capital and a 24/7 bond player, is dismissive about the inverted bond curve and says it actually “is a notoriously poor predictor of future cash rate changes.”

Charlie Aitken has just returned from a Spanish holiday and laughed how a break from the day-to-day battle with the stock market often can produce turmoil but thinks the past few weeks have “provided a buying opportunity.”

He also thinks the Hang Seng Index in Hong Kong could soon be a money-making opportunity, after falling 12% since the protests. But he’s not moving that way yet. He referred to the advice from Lord Rothschild, who gave the stock market advice to “Buy when the cannons are firing and sell when the trumpets are blowing!”

Charlie is another one who’s not going to cash because of the bond market. Instead, he thinks the better investment bet is to buy good quality US companies, such as Caterpillar and John Deere, which currently are troubled by the trade war. A trade deal would be good for these companies and they might be a safer trade than punting on emerging markets.

Back to Joye and his controversial reference to local house prices. His 30-40% call was his worst case and least likely scenario. He saw that as possible in the context of a significant global recession, which he doesn’t see in his economic crystal ball.

Instead Joye, who called the more measured fall in house prices in 2017, now thinks they’ll rise as much as 10% over the next 12 months! He’s a guy who can overwhelm you with self-confidence and his reminding of his great calls but he does have good form on the board so he can’t be easily ignored.

I asked him if he’d take on John Adams in Round 2 of his debate on house prices, where he believes he “monstered” his rival. But he says he’d rather take on the godfather of the 40% house price prediction — Professor Steve Keen.

I’ll await Steve’s reaction and be happy to host a matching of their economic brains sometime soon, if we can arrange it.

Away from that, it’s comforting that serious market players aren’t turning tail and running from the stock market, despite the negative vibes from the bond market, stock market, China’s reaction to the Trump trade war, Hong Kong, Iran and Brexit-mired Britain. The chances of a black swan hiding amongst that lot can’t be totally ruled out!