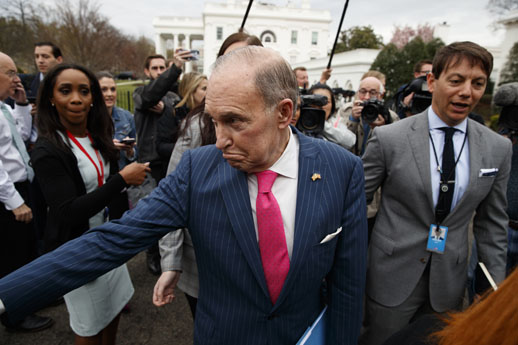 Can a TV star economist help the TV star President and stocks?

Could a television star President actually start to become more presidential with his new economic adviser, who actually is a television star in his own right? I have to confess that I have been a fan of Larry Kudlow for as long as Foxtel has been operating!

As someone who has been a media economics commentator, the arrival of Foxtel brought the likes of CNBC, CNN, BBC and Bloomberg, that were clearly the TV channels I needed to watch.

It was 1995 and I guess I’ve known Larry Kudlow since then. So when Larry was appointed the economic adviser to Donald Trump a couple of weeks ago to replace Gary Cohn, the former Goldman Sachs boss, who couldn’t cope with Donald’s tariffs play, I had mixed feelings.

On one hand I knew Larry was an arch-conservative but I also know that he knows a lot of economics and because he knows the media and Wall Street intimately, I thought he might make Donald see good sense.

However, after watching a series of documentaries on Donald, his self-belief and some of his odd views of the world might make it hard for someone like Larry to steer the President in the right direction.

Happily, as I write, Wall Street is up and CNBC’s headline says “US tries to soften trade tone against China”. And surprise, surprise, the Dow is up strongly.

Yesterday I said that Donald is the biggest threat to our super and portfolio of stocks, so I have my fingers crossed that Larry is giving good advice and, hopefully, Donald is listening!

Like a lot of conservatives, he started out as a lefties/Democrat and in 1987 got the gig as chief economist of Bear Stearns. This was the outfit that first ushered in the GFC market crash, going into liquidation in March of 2008. History tells us that Bear Stearns wasn’t seen as big enough to be allowed not to fail, unlike Lehman Brothers in September of that year!

Larry worked with famous US economist, Arthur Laffer, whose economic model, known as the Laffer Curve, featured in the movie Ferris Bueller’s Day Off.

In that movie, the economics teacher referred to then US vice-president, George Bush Sr., who referred to it as “Voodoo economics” because Arthur argued if you cut taxes, the government actually collects more tax. Why? There are less reasons to pay tax lawyers to save you tax and there are more incentives for businesses to produce stuff and hire people, etc.

It remains an economic story that lefties despise and ridicule, while righties believe it big time. It’s why the US has tax cuts in the pipeline from Donald.

Back to Larry and he had a fall from grace in the mid 90s. This is how Wikipedia tells it: “Kudlow was fired from Bear Sterns in the mid 1990s due to his cocaine addiction.”

After sorting himself out, he became a part of the ‘furniture’ at CNBC, with a series of shows and as a special contributing editor. While he always had a biased conservative stance, he was forced regularly to be reasonable, primarily driven by his economics training, which stopped him going off with the pixies and the fairies at the bottom of the extreme right-wing garden who come up with crazy political/economic ideas.

And now he has to talk sense to Donald. I suspect he was behind the message that the White House is softening the trade tone against China. Trump himself tweeted a more conciliatory message only yesterday and this is how USA Today saw it: “President Xi and I will always be friends, no matter what happens with our dispute on trade.” Trump said this in a tweet in which he also predicted that the US would prevail and reach agreements with China on trade issues. “China will take down its Trade Barriers because it is the right thing to do,” Trump said. “Taxes will become reciprocal and a deal will be made on Intellectual Property. Great future for both countries!”

I suspect Larry’s fingerprints are over this better message from Donald and Wall Street has liked it.

He is playing in both camps with these two quotes today, showing he has to appease his new boss and he did that with this on CNBC: “Trump is responding to decades of misdeeds by China [on] trade,” said Kudlow. “It's high time we did that.”

But he also threw in this: “I don’t know if we’ll have tariffs or not.” But he later added that “I have no specifics to offer this morning, but I will say progress is being made on renegotiating and recalibrating NAFTA.”

Last night I interviewed the chief economist at Westpac, Bill Evans, on my TV show, Money Talks on the Sky News Business channel, and while worried about a trade war, he was working off the idea that it would be avoided. However this is a learned guess and we know Wall Street has taken out insurance about it by putting on a 10% slide of the stock market since tariffs were brought up.

If a sensible trade deal comes out of this, stocks will surge higher and Larry knows it, which would help Donald’s political stocks before November’s mid-term elections.

It’s a big task to make Donald presidential but I suspect only someone with a weird, media background like Larry can actually help him pull it off.

I damn well hope so!