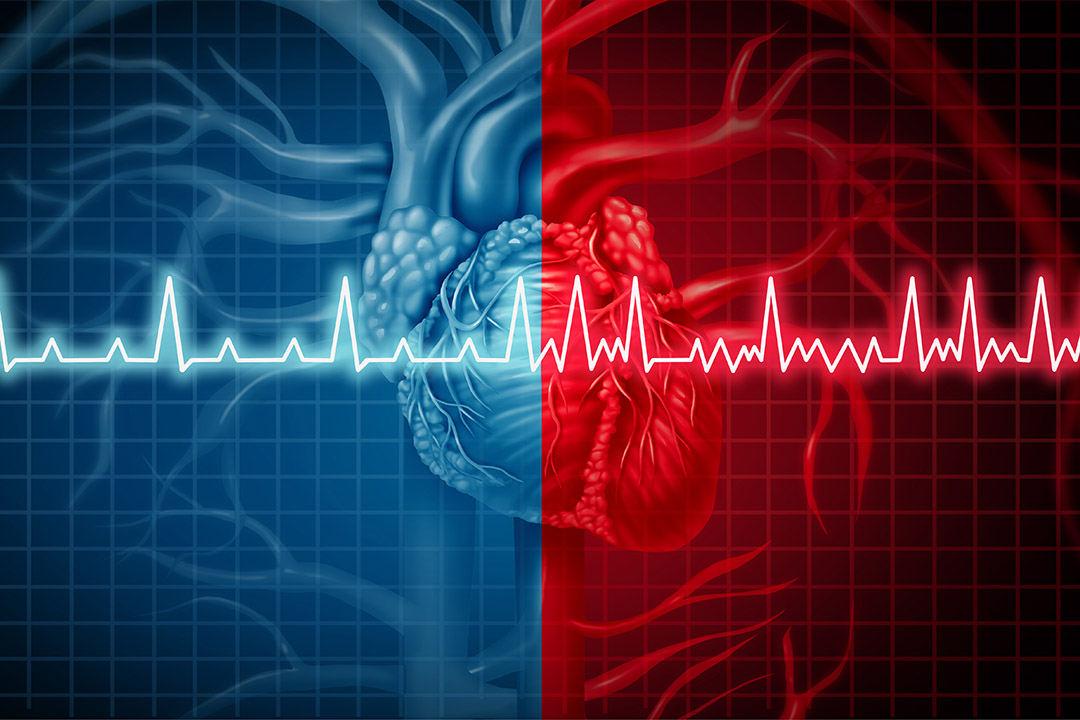 Be still my beating heart

Most humans are born with a heart rhythm known as sinus rhythm. This is where there is a coordinated contraction between the top chambers known as the atriae and the bottom chambers known as the ventricles. The cardiac impulse starts in an area called the sinus node in the upper part of the right atrium.

There are two major concerns with developing atrial fibrillation. The first is that it may impair cardiac function because of the lack of coordination between atrial contraction and ventricular contraction. The more concerning problem being the risk of stroke. In a person, especially, over the age of 65, who experiences any form of atrial fibrillation, the yearly risk of stroke without treatment is somewhere between 3% to 5% per year, based on other parameters of risk.

With increasing age and often weight gain, fat infiltrates into the electrical system, increasing the risk for atrial fibrillation. Thus, lifestyle interventions such as weight loss, reducing alcohol and other toxins may certainly reduce the incidence of atrial fibrillation. There are a number of highly effective drugs and cardiac interventions, such as pulmonary vein isolation via a catheter, which can also significantly reduce episodes of this condition. There are now very effective blood thinners which appear superior to warfarin to prevent stroke.

Many health professionals who are not doctors try many different complementary techniques to affect atrial fibrillation. Recently, a large randomised controlled clinical trial of fish oil and vitamin D was presented at the American Heart Association meeting demonstrating no reduction in atrial fibrillation using these agents.

Since the release of this trial, I've had a number of patients ring me worried that their consumption of fish oil may be causing atrial fibrillation because this was misreported by some media health presenters, who clearly misunderstood the trial. Basically, 25,000 men and women living in the US with no prior history of atrial fibrillation were randomised to either receive placebo, vitamin D or omega 3 alone or in combination and neither active supplement showed any prevention of atrial fibrillation compared with placebo. The average age of this group was 67 with 51% being female. Of the 25,000 people, only 900 develop atrial fibrillation amounting to 3.6% of the entire cohort.

There have been a number of studies released in the past suggesting some potential benefit for the use of fish oil for the prevention of atrial fibrillation. Although I am a great supporter of the use of vitamin D, I'm not even sure what potential physiologic benefit there would be for preventing atrial fibrillation. With the increasing benefits seen from vitamin D supplementation for the prevention of a number of other conditions I still strongly support people maintaining vitamin D levels in blood around 100nmols/L. But clearly don't take it purely to prevent atrial fibrillation.

Regarding omega 3s, however, it has been my experience that the use of a reasonable dose of omega 3 daily, along with magnesium, may reduce many cardiac dysrhythmias but typically not significant atrial fibrillation. A recent trial published known as the REDUCE-IT trial used a much bigger dose of pure EPA (one of the two key omega 3 fatty acids) demonstrating, in patients on maximally treated statins, a 25% reduction in hard cardiac events such as cardiac death and heart attack.

I therefore wonder what the agenda is of reporters in the health media who continually want to denigrate the potential benefits for supplementation. Interestingly, a recent study of vitamin D supplementation demonstrated a 38% reduction in the risk for advanced cancer but only if a person was of normal body weight.

The message here to me is very clear. Never see supplementation as a replacement for a healthy lifestyle but purely what the term suggests: supplementation. It is my opinion that a variety of evidence-based supplements make healthy people healthier and are an excellent adjunct to medical treatment if you have established disease. Thus, I would never view omega 3 supplements or vitamin D as a replacement for medical treatment in atrial fibrillation but certainly encourage my patients to add this to their medical therapy as I believe it does achieve better long-term results. I cannot give you a randomised controlled clinical trial to back up my comments, only 40 years of practising medicine. In the end, the decision to swallow supplements is purely yours and I will continue to do so because of years of clinical experience seeing the benefits in the vast majority of my patients.

Bring on 2021
Alcohol, hangovers & the holiday break
Coronavirus vaccines – are we there yet?
And the beat goes on…
Bevan Slattery from NextDC gave me a lesson on exceptional people