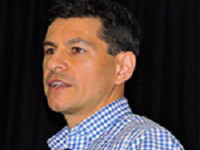 With the grocery market in deflation, we are essentially already in a price war between the major supermarkets Woolworths and Coles.

Take a look at the UK market, where the fundamentals are similar to Australia – the big four retailers in the UK are now four years into a price war, and their margins have dropped by 50% in that time.

The definition of a price war is “an irrational promotional intensity aimed at winning market share to counter the growth of rivals, where price investment is matched or exceeded by rivals, driving down industry profits at an accelerating rate”. Not my words, but it sums it up nicely, and it tends to be good for consumers, but bad for suppliers, retailers and of course shareholders as profits are squeezed.

Coles have been using the infamous ‘Double Loop’, where retail prices are lowered to increase volumes and the scale benefits are reinvested into further lowering prices, as per Roger Corbett’s strategy with Woolworths in the early 2000’s. However, the Double Loop is a strategy that works best for the largest incumbent (in regard to market share), i.e. Woolworths, or the aspiring new entrant who wants to grab market share (Aldi), but not usually the Number 2 - Coles.

Essentially, Coles is cannibalising industry profits, and whilst they are the ones that started the price war, it will be Woolworths with their scale advantage that finishes it, with significant pain for both parties along the way.

How far we fall into a price war is hard to say. But in the future state, post price war, in what you could perhaps describe as a disciplined, or more rational market, it could be a case of a divided market; Aldi taking ownership of value – that means good quality at a good price, Coles and Woolworths owning range and choice – with strong customer service and in-store theatre, whilst Independents own convenience. Fresh would most likely be shared with the majors and Independents.

Nevertheless, a common theme in any country that Aldi has entered is that the price gap between the majors gets materially closer, margins are squeezed and growth is lower. So for Woolworths, with FY15 margins at almost double the global average at 7.9%, they will have to get used to doing more for less with lower retail prices and lower margins, whilst also having to re-engage staff and re-engage consumers. The Holy Grail for Woolworths will be getting back to the position of ‘The Fresh Food People’ with consumers really believing and experiencing it.

Since Coles doesn’t have the scale advantage that Woolworths has, with CODB (cost of doing business) estimated to be 100-150bp higher, it’s likely to be difficult for Coles to ultimately win the price war, even though it has a more proven and experienced leadership team currently. It will have to differentiate on non-price attributes, such as service, fresh offering, range, in-store theatre and shopability.

For Aldi, it will be organic growth and continued expansion across Australia and selling more fresh foods - and of course, being prepared for the possible entry of another European hard-discounter, Lidl.

For Metcash and IGA, it’s about ensuring it delivers a unique customer proposition, differentiating itself from Coles and Woolworths, as well as resolving the structural imbalance between Metcash and IGA storeowners. Otherwise, there’s a danger that independent store owners will become internally focused as opposed to concentrating on encouraging consumers to shop at their stores. And the clock’s ticking.