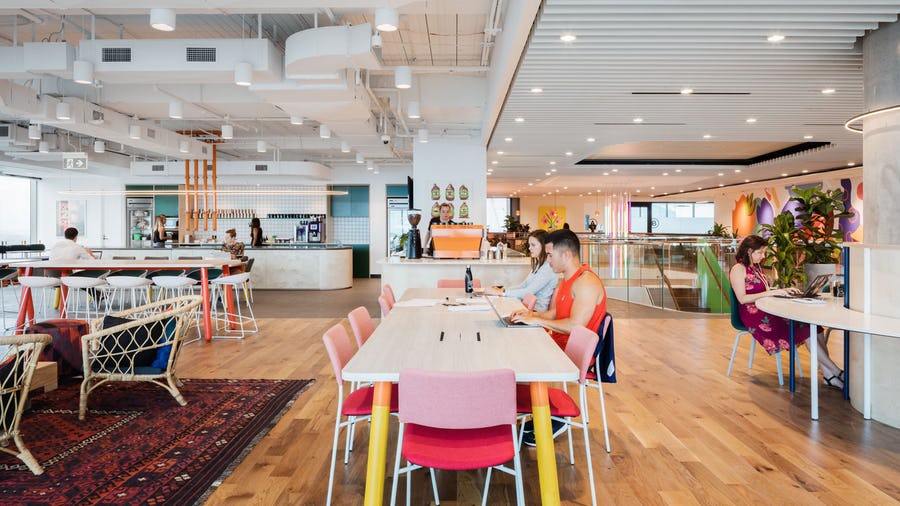 These days, co-working is less about being a stop-gap measure and more about keeping millennial worker bees buzzing with concepts such as collaborative hubs, creative zones, chill out spaces and “wellness centres”.

In the old days they used to be called desks, meeting rooms, corridors and sick bays.

The cult-like terminology aside, shared space is surging in popularity among users and investors alike and now participants are rushing to list.

A warning sign, perhaps, of an overly frothy market?

It’s a case of so far, so good: Victory shares marched to $2.38 and remain above the listing price despite this week’s roiling market.

Now, the listed property fund Blackwall (BWF, $1.03)  plans to demerge and then separately list its WOTSO Workspace business (a capital raising is not planned).

“WOTSO’s network now has the capacity to generate over $30 million of revenue, so we feel the time is right for it to stand alone,” says Blackwall director Seph Glew.

Launched in 2014, WOTSO has 17 sites covering 34,000 square metres, including its flagship Bakehouse Quarter in a former Tim Tams factory at Sydney’s North Strathfield.

Blackwall sold the building in April, but WOTSO remains the tenant under a sale and leaseback deal.

Victory, meanwhile, has 21 locations in Sydney, Melbourne, Brisbane and Perth, this month opening its 20th site in St Kilda Road. Occupying a whole building, the 3000 sq m of space is subject to a seven-year lease with a five-year option.

As with any property, occupancy rates are a key profitability swing factor: Victory claims all of its sites are at least 80% occupied, with the exception of its 72% full 420 George St digs in Sydney that only opened in March.

Victory reckons flexible workspaces still only account for 1.6% of office space in Melbourne and 2.6% in Sydney, compared with 4% in London, 3.9% in Singapore and 8% in Shanghai.

Then there’s the “buts”: competition from deep-pocketed global entrants is intensifying and there are concerns the challengers are pushing for market share at the expense of sustainable earnings.

The London based Regus has 83 centres here, while the aggressive Singapore-based JustCo plans to open six sites by the end of the year.

One of the world’s biggest privately owned companies, equally aggressive US giant WeWork has 17 sites here and reportedly is mulling its own $50 billion plus IPO in the US.

Servcorp is also a formidable player (see below) while other entrants include the home-grown HUB Australia, which has seven locations across 21,000 sq m, including Melbourne’s venerable Georges building.

If that’s not competition enough, traditional landlords are joining the ‘cult’ by carving up space into sub 1000 sq m tenancies. For instance GPT has established Space & Co at 580 George St in Sydney, while Dexus has unveiled similar facilities under the SuiteX banner.

There’s a fundamental weakness in the co-working business model which may become apparent in an economic downturn.

As Victory notes, there’s a “potential asymmetry” between the long-term nature of its own leases - a weighted average of seven years — compared with the short term arrangements of its coworking tenants.

In other words, if the economy has a nervy turn it faces lower occupancies but its own rental overheads are fixed.

Investors should also be cognisant of whether they are investing in a leasehold business, or the underlying property.

Victory leases its space from third party landlords and also has some tenancy arrangements with related parties.

Blackwall owns and controls ten of WOTSO’s properties. The idea is that Blackwall’s 1200 shareholders receive WOTSO shares pro rata, so they will still be involved with property ownership as well as collecting rent.

The timing of the WOTSO spin off hasn’t been specified, as the transaction is subject to shareholder approval and a favourable tax office ruling.

In the meantime Victory is valued at $83m and trades on a defensible earnings multiple of around nine times.

Paradoxically, the flexible workspace pioneer hasn’t benefited from the sector’s growth valuation wise, with Servcorp shares more than halving over the last three years amid claims of uncommercial behaviour by the upstarts.

Founded by CEO and Liberal Party stalwart Alf Moufarrige in 1978 and listed since 1999, Servcorp operates across 160 locations in 54 cities and 23 countries.

With a focus on serviced offices, Servcorp if anything has been disrupted by the more casual coworking models that don’t involve all the support (such as shared receptionists answering the phone in your company name) being laid on.

Not surprisingly, Servcorp has responded by re-doing swathes of space for co-working: so far, 83 locations have been converted at a cost of $15m, with a further $10-12m of expenditure to come.

The headwinds were felt in the first (June) half that saw Servcorp boosting revenue by 5 per cent to $164 million, but posting a statutory loss of $12.8m after writing off $17.7m of leasehold improvements (mainly in New York and Abu Dhabi).

“There are early indications we are countering the pressure from other recent market entrants, who are focused on market share and not profitability or cash flow,” the company said.

As far back as 2016, Mr Moufarrige described co-working hubs as “growing again in plague-like proportions.”

Despite the pressures, Servcorp left its interim div unmolested, at 13c a share (partly franked). At the company’s February 23 full year results investors should expect another 8c/sh, implying a roomy yield of 5.7%.

Servcorp has cash of $71m and no external net debt.

Like Flexigroup in the 'buy now pay later' sector, Servcorp looks like a well-established enterprise overlooked by investors in favour of new trinkets on offer.

Servcorp got chucked out of the ASX300 index in March, which didn’t help

Servcorp, by the way boasts former PM Mark Vaile on the board, while erstwhile Victorian premier Steve Bracks is a Victory director.

We’re not sure why the sector appeals to the pollies, but they sure know about the need for flexible office arrangements come election time.