Substitute 'meat' for him 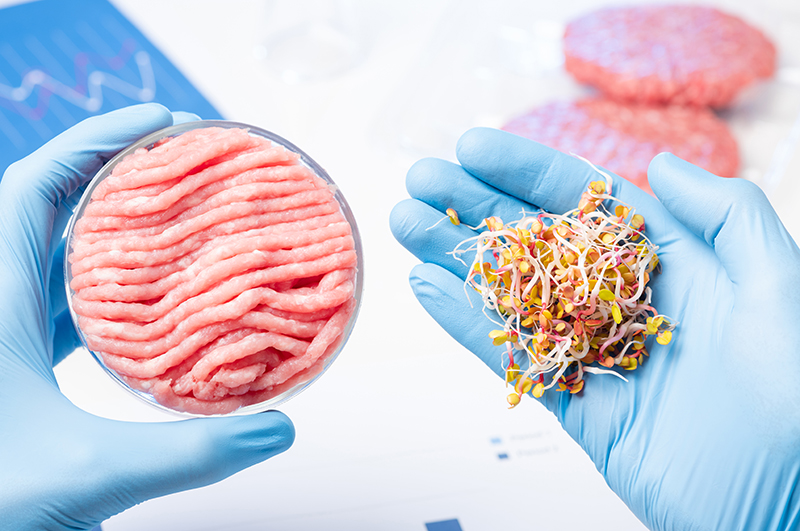 Substitute 'meat' for him

The first and last time your famished columnist had a vegan sausage was at an animal charity’s food stand at Bunnings, with no carnivore alternative on offer.

Suffice to say, the taste and texture of the mystery bags was redolent of sawdust, with an odd aftertaste that even dollops of tomato sauce and onions could not conceal.

Still, your columnist accepts that as well as being murder, meat is injurious to the planet and increasingly unsustainable, given population growth and shrinking arable land.

Increasingly, animal flesh will be off the menu – and not just in the dining halls of Melbourne’s inner city Moreland Council that has imposed a ‘meat free Monday’ on its councillors and staff. (Such is the joy of democracy an opposing councillor promised a protest BBQ across the street).

As with all bandwagons, investors have been quick to leap on the enterprises developing more scientific and tastier alternatives than that sad Bunnings banger.

Supported by luminaries such as Leonardo Dicaprio and Bill Gates, shares in the Nasdaq-listed faux meat play Beyond Meat have bounded more than 600% since listing in early May, ascribing a meaty valuation of $US10 billion. Beyond Meat’s burgers even contain beetroot juice to emulate that oozing effect from a par-cooked patty.

The unlisted Impossible Foods has grown from an $US30m ($45m) entity to a $US2 billion one, with the near-impossible backing of investors including Katy Perry, Serena Williams and rapper Jay Z.

Even more impossibly, the company supplies beef bastion Burger King, which is experimenting with a vegan line called the Impossible Whopper. Meanwhile, KFC in the US is trialling Beyond Meat’s plant-based nuggets and boneless wings at one of its Atlanta restaurants.

Locally, investors are not yet able to dine out on meat substitute stocks in earnest, but a couple of tech minnows are aligning themselves to the trend with better methods to grow the core ingredients such as protein-laden peas and beans.

As its name suggests, root zone temperature optimisation (RZTO) either heats or cools the plant to maximise protein. The technique in particular produces more of a protein called leghemoglobin, which has the look and flavor of real beef.

Based in parched Israel, the company is also developing Irrigation by Condensation, which draws water from the air using wind or solar power. Because of this, the technique is most useful for off-the-grid farming locations.

So far, the company claims a 40% increase in bean (and cannabis) yields and a 66-150% gain in leafy vegetable yields. By heating their roots during winter, Israeli basil farmers increased their crops by an average 66%.

In southern Israel, yard long bean growers improved yields by 40% after their winter crops were kept at a constant 20 degrees.

In Amera in Spain, greenhouse crops kept at 21 degrees experienced a similar boost in fecundity.

The company has begun a trial planting of peas and bean crops at its Israel R&D hub. The results from each plot will be compared with a control plot planted under the same “ambient conditions”.

“If successful, Roots will continue to allocate further marketing resources to develop their offering to the plant based meat market,” the company says.

Roots listed Dec 2017, raising $5m at 20c apiece. In May, the company raised $1.66m in a private placement of ordinary shares at 7c apiece, supported by director and EverBlu principal Adam Blumenthal.

A reality check has since ensued, with an options issue targeting $1.7m raising only $216,343.

Roots’ June half accounts show revenue of $US83,000 and a $US1.69m loss. But the company also reports sales of $US528,000 since January 1, so like a good drip-feed irrigation system, these sales should trickle down to revenue.

In simple terms, this is organic beef. It’s a concept inner urban vegans would still turned their pierced noses up at but meat produced from chemical free pastures and free of all antibiotics is preferable to the traditional product.

The company has a protected cropping system that allows farmers to grow crops in landscapes that would normally be too harsh for growing vegetables.

The company’s food brand, called Food for Reason, distributes vegetable products grown at the company's farming sites. While the company has no beef with growing cattle, it’s also planning to launch non-dairy (oats based) milk and plant-based burger products next year.

Wide Open listed in July last year after raising $5m at 20c apiece. The company was founded by chairman Anthony Maslin, who was motivated to forge positive changes after the death of his children Mo Evie and Otis on MH17 (the Malaysian Airlines flight shot down by Russian rebels).

Drawing a wider string to the “wellness” bow, a slew of stocks play in the healthy food additives game, especially in industrial hemp production (hemp is a rich source of omega 3).

According to Markets and Markets, global demand for plant-based meat is expected to reach $US27.9 billion by 2025. The global meat industry meanwhile is reportedly worth $US1.4 trillion ($A: a lot).

Of course, neither of the aforementioned minnows truly fit the “faux meat” category, in terms of manufacturing, packaging and marketing the produce for pernickety urban consumers. But we’ll punt vegan sausages all round that one of them will list before we’re carving out ersatz Christmas turkey.