Hurricane Housing is on its way 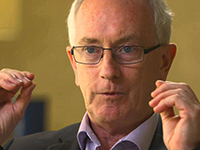 Hurricane Housing is on its way

I’m not one of the “Armageddon Army” who throw a “barrage of insults on Twitter” at Peter every Friday, because as Peter emphasizes, we’ve been mates ever since we suffered together through the Masters in Economics degree at UNSW 30 years ago, and we always will be mates. We’re the classic “glass half-full” and “glass half empty” buddies, and nowhere does it show up more starkly than in our views on Australian housing. Peter asked me to comment on his “Let’s get real: Is Hurricane Housing on its way?” article, so here I go.

Peter cites a whole lot of optimistic data that he extrapolates into the future, and therefore sees blue skies ahead. One was about the latest unemployment data:

I can write almost the same paragraph about another country some time ago: its unemployment rate held steady at 4.3% in May, and this was the lowest level in six years!

The country and the time? The USA in May 2007, three months before the Global Financial Crisis hit (Americans call it the “Great Recession”).

Figure 1: USA Unemployment before the 2008 Recession 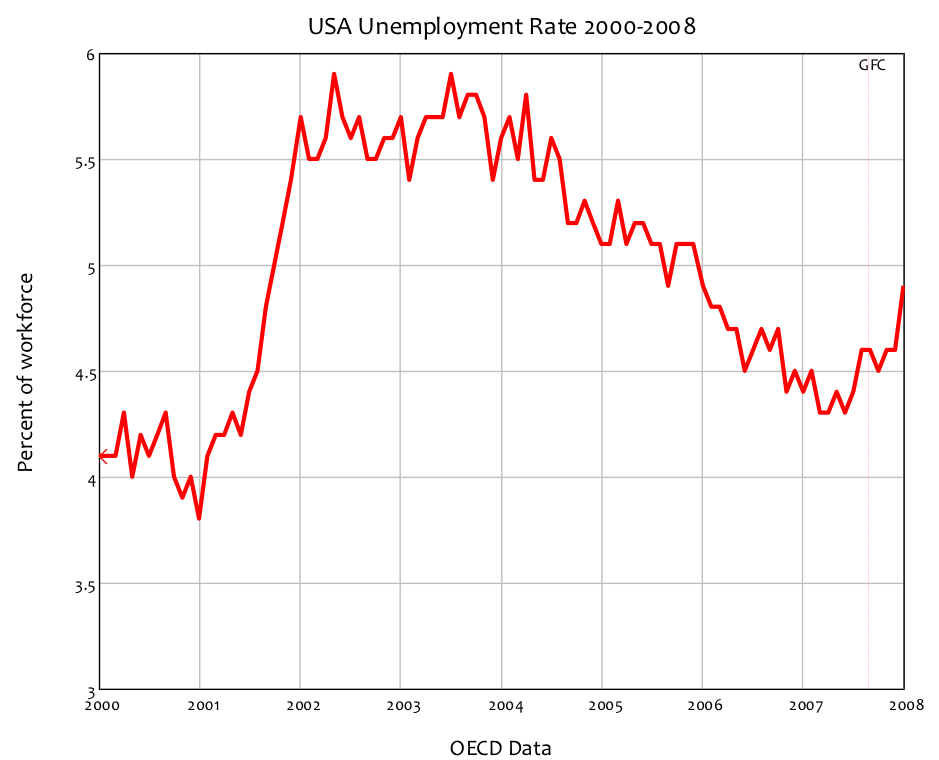 May 2007 was a turning point for the US economy, but not for Australia, because of two factors that aren’t in Peter’s “glass overflowing” list: the level of private debt, and credit—which is identical to the annual change in private debt. The USA hit a private debt level of 170% of GDP in 2008, after which it fell by 20% to 150% of GDP (which is still twice its long-term average of 72%). Australia peaked at well above that (190% of GDP), slumped about 10%, but then rose to an all-time high of 205% of GDP. 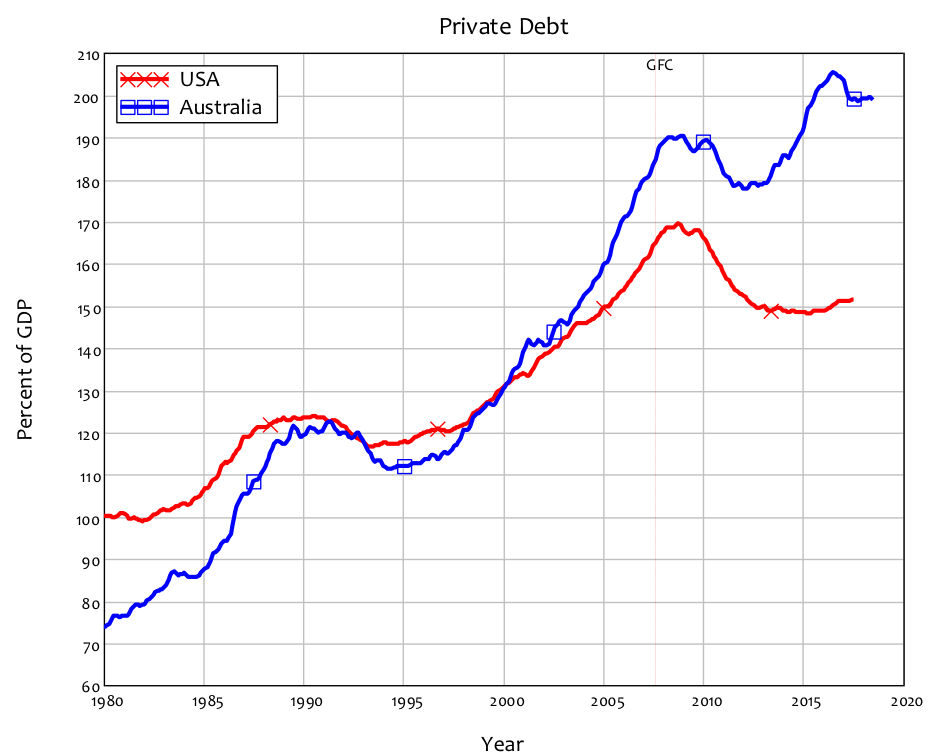 This matters because when debt is rising quickly, credit (the change in debt) causes an apparent boom, as it did in the USA during its Subprime Bubble. But when debt stops rising, credit can turn negative, and actually reduce total demand.

Figure 3: Credit in the USA and Australia since 1990 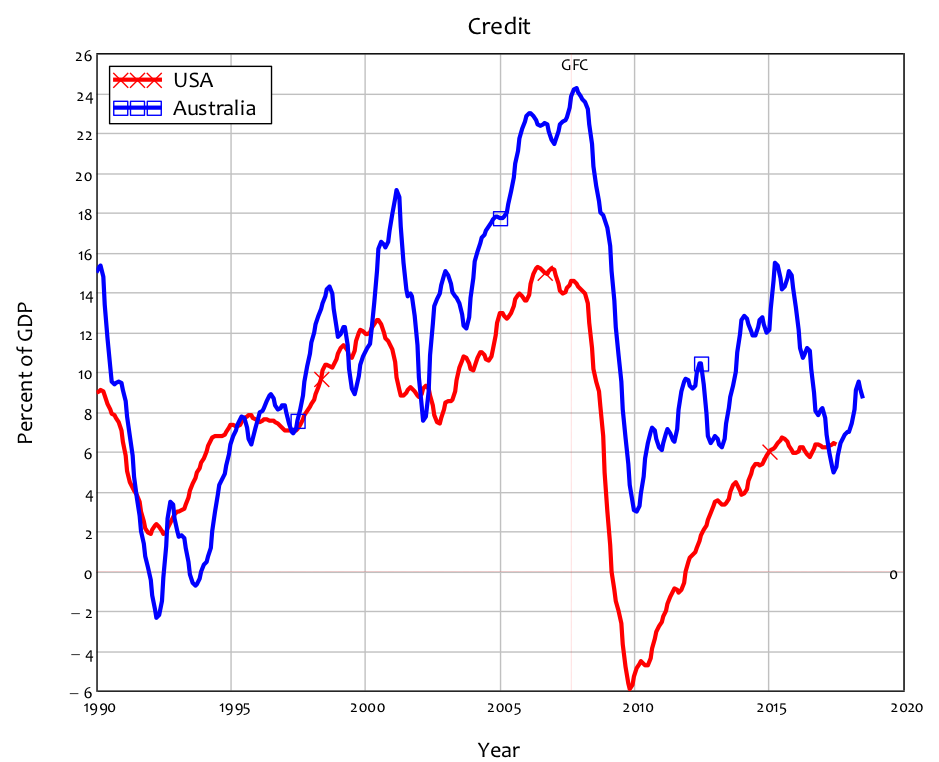 Textbook economics missed this process because it argues that credit doesn’t matter: it just shifts spending power from saver to borrower when it’s rising, and back in the opposite direction when it’s falling. Central Banks—even including the RBA—are now saying that the textbooks are wrong. Credit matters because banks create it “out of nothing”: a bank loan of, say, $2 million, creates an identical amount of additional money and demand. The same process works in reverse: paying debt down by $2 million destroys that much money and demand.

This effect is so obvious in the USA that the plot of credit versus unemployment since 1990 are virtually mirror images of each other: when credit goes up, unemployment goes down—and vice versa (for the technically minded, the correlation coefficient is -0.88).

Figure 4: Credit and Unemployment in the USA since 1990 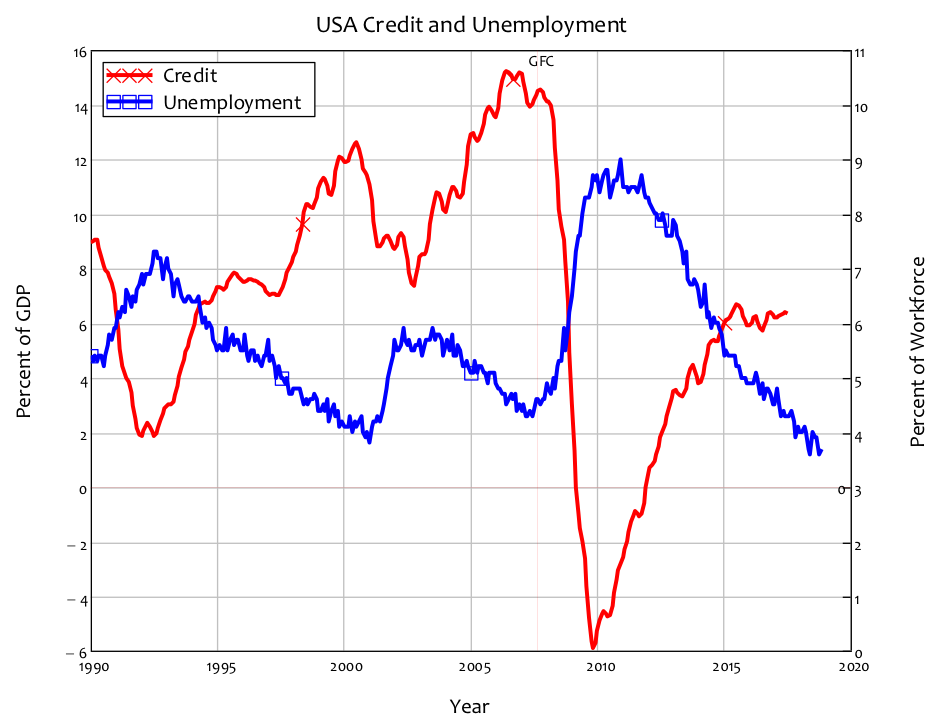 This is the contrarian’s rub for the optimist’s half-full glass: optimists assert that house prices won’t crash so long as unemployment remains low. But low unemployment depends on continued high levels of credit—which requires that private debt continues growing faster than GDP. This simply can’t go on forever. When private debt stops growing, credit will fall, and unemployment will rise. 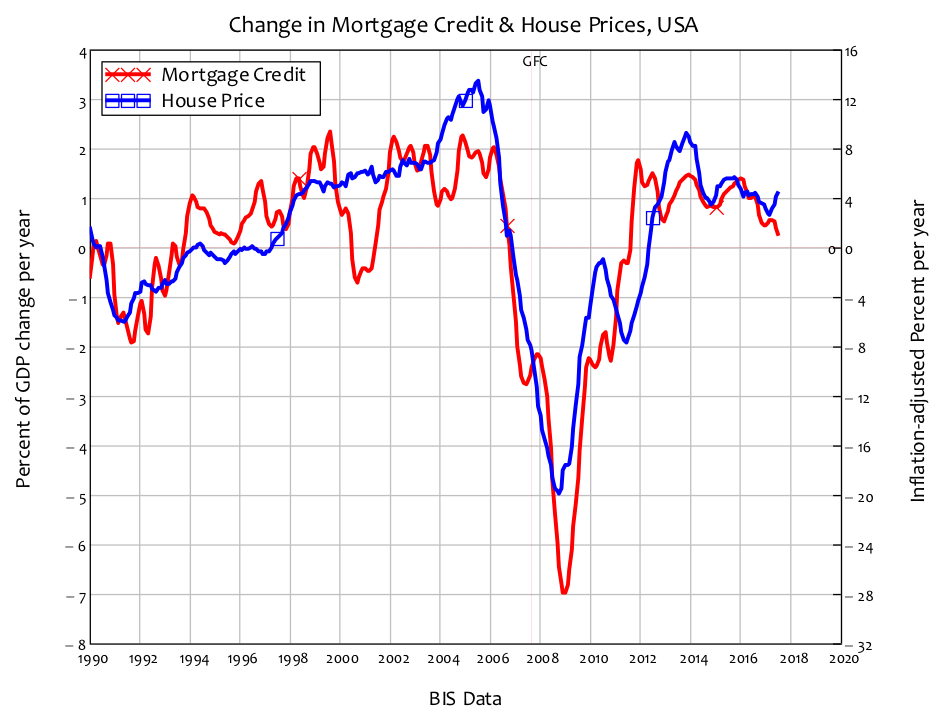 Is Australia “different”? In direction so far, yes, because—thanks to Government policy (Rudd’s First Home Vendors Boost, as I nicknamed it) and outright banking fraud, as the Banking Royal Commission has shown—Australians have kept the accelerator on household debt for far longer than the Americans have. 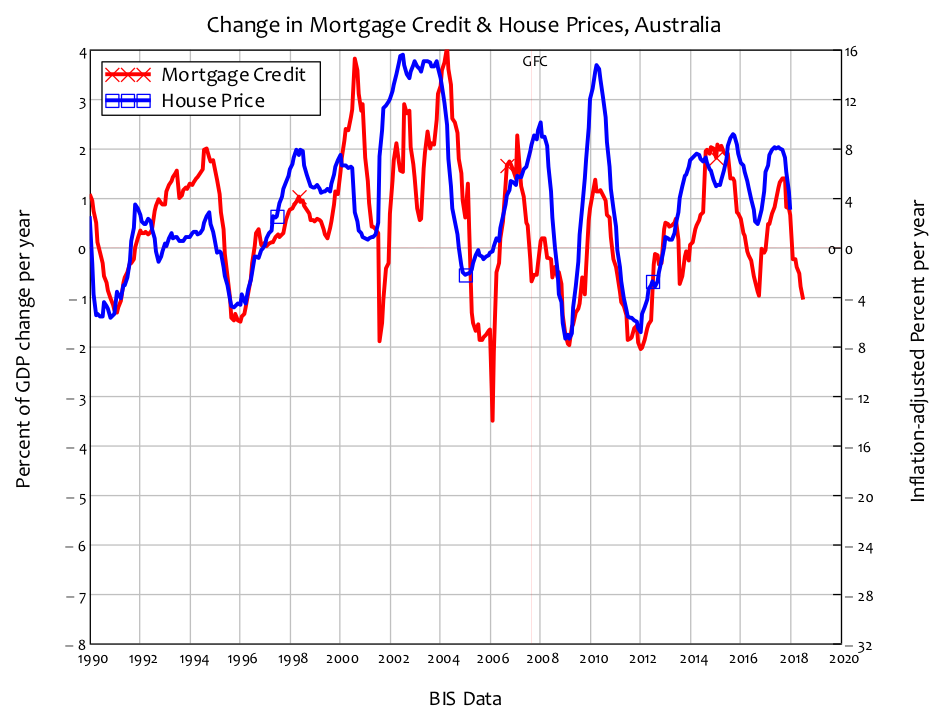 The foot is now coming off the accelerator, but only after Australia has achieved the highest level of household debt ever recorded for a country running a trade deficit (the previous record-holder was Ireland). 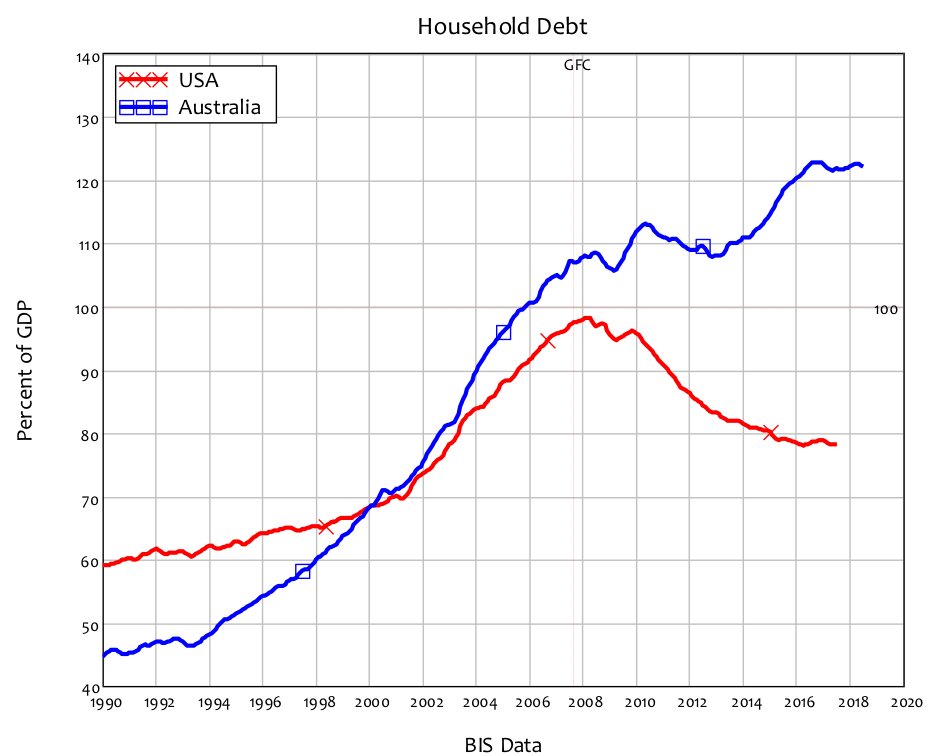 As credit turns negative, the same force that caused US house prices to fall 40% from peak to trough will manifest itself in Australia. The government—whoever is in power—will do whatever it can to try to stop it, but for its tricks to work, banks have to be willing to lend yet more mortgage debt. Especially after the Royal Commission, those days are over. A 40% fall in house prices is entirely within the realms of possibility. 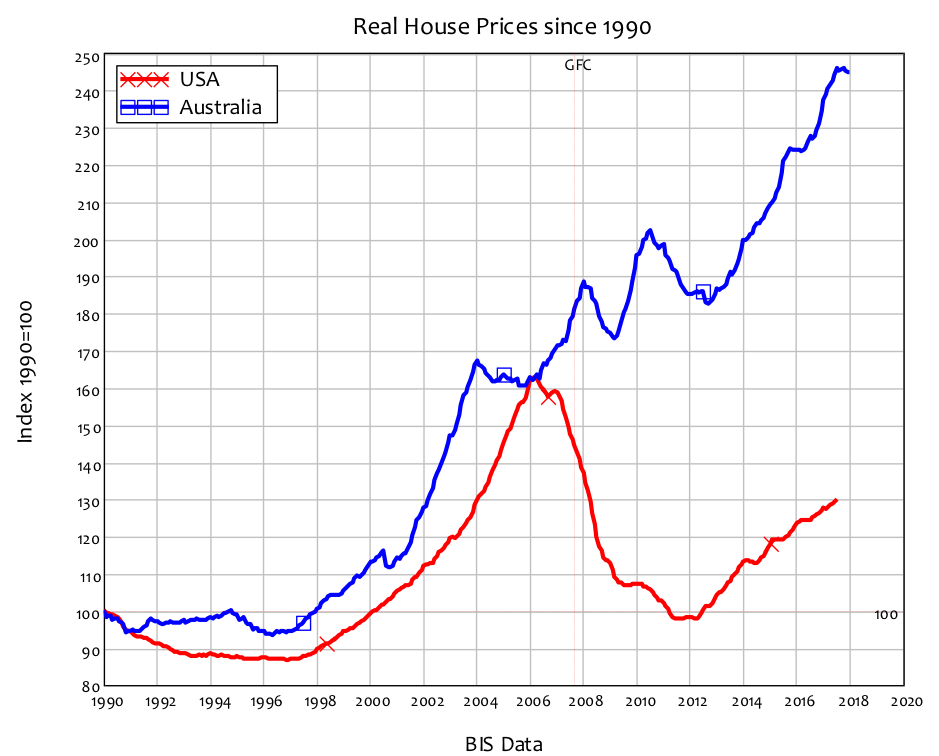