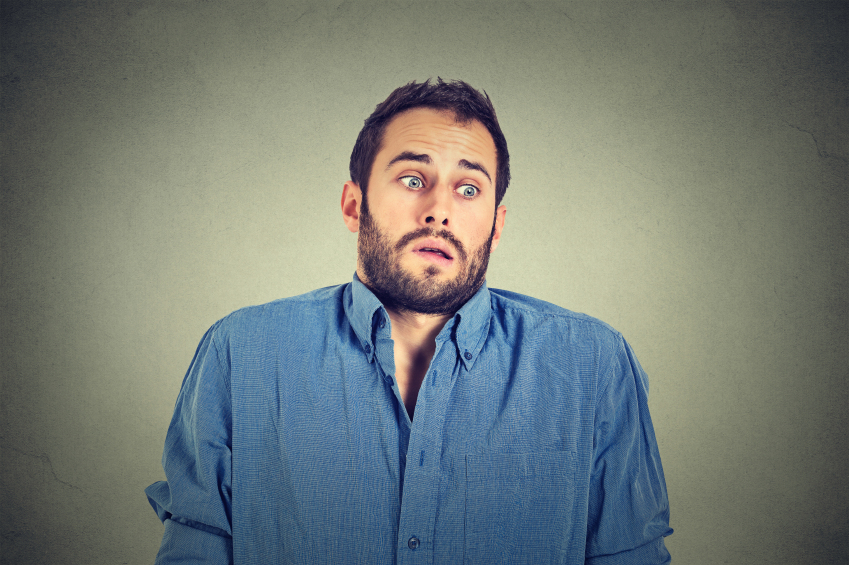 Yes Zac, there is no Santa Claus with stocks but don't blame the politicians

Yes Zac (a reader who recently questioned politicians and the market), there is no Santa Claus when it comes to investing in stocks. And yes, something crazy did happen to stocks since March 2015 but even though I think politicians can be second-raters, butt-coverers and bad for the economy, I can’t blame them for this sell-off.

Sure they had a small role in not being gifted in helping us to avoid the causes of the GFC but really the problems since then that have hurt stocks have been more in the hands of central banks, regulators and even those damn pests called hedge funds, who have the ability to borrow other people’s shares to KO the market.

I get lots of emails about banning short-selling, stopping super funds lending their shares to hedge funds and those sneaky rich interests who manipulate stock markets at the expense of long-term investors.

Zac makes a point that I’m sure lots of investors might have pondered with the following: “Something happened in March 2015. The ASX 200 stopped going up and has since fallen by as much as 21%. Also I noted that the ASX 200 has still a way to go — some 28%— to get back up to the GFC high levels in November 2007. So, if you bought “the market” and held on from around 2006, you would have gone nowhere, in terms of capital growth and if you bought in after 2006 you would still be down after 10 years — a bloody decade.

You are right Zac, the ten years to 2016 has been a bad decade but if you started investing in 2009, as I was trying to make people — especially those rushing into term deposits and annuities for safety after the GFC crash of 2008 — you would be up about 60% on capital gain, about 30% on dividends and 7% on franking credits if your portfolio was as good as the index.

Zac I received an email from a subscriber to our Switzer Super Report — Mick the farmer — who said he’s made 50% over the year! He thanked our report but he has clearly picked the right stocks, was judicious and probably got a bit lucky. Lots of careful investors could have seen their portfolios down 20% since last March and maybe more if they were very long BHP and Rio.

Zac you have to remember you are looking at what happened after two huge market challenges. First was the GFC and the potential threat of a Great Depression, which we avoided, at least so far!

Second, we’ve seen a huge slump in commodity prices, which has been overdone but has been driven by OPEC and the big miners trying to kill off their rivals. We’ve seen how that has worked out and is one reason why I think calls to “sack Jac” — the chairman of BHP Billiton — does not look too unreasonable.

I use this chart a lot and I know it’s not easy to read and yes I do use 2009 to make the point but the chart and it’s story works no matter whatever end-point you use. 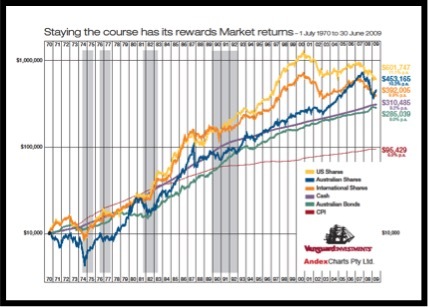 Apart from showing that $10,000 becomes $453,166 if you invested in shares and reinvested the dividends in a “let ‘em roll” strategy between 1970 and 2009 — see the blue line — it shows there are lots of crashes and corrections, such as our recent one, which became a bear market momentarily, but in the end stocks prevail.

The yellow line shows US stocks were better and so were International stocks with the orange line but all were better than cash getting an interest rate pay-off.

Note in crash times cash looks nearly as good but eventually stocks pull away, however, you get less sleepless night with a non-stock portfolio of investing assets.

While I don’t have faith in Santa Claus, history shows I can believe in stocks eventually rewarding me for my loyalty but I have to be careful with my portfolio — BHP and Rio showed that!

What has happened since March 2015 to explain the sell-off involves the following:

• We overbought shares up to March based on a rosier outlook for China and the USA;

• The slump of commodity prices —oil and iron ore in particular — was not expected;

• QE in Europe and Japan have taken longer to get a good economic bang for the ‘bucks’ or liquidity poured into their economies;

• Greece was a temporary worry, so was Putin and the refugee-Syria-ISIS issue has not helped confidence;

• The Yanks delayed their interest rate rises, which was like a thermometer showing the overall health of the US and global economies was not as good as we expected in March 2009; and

• And armed with all of this, not helped by that crazy casino called the Chinese stock market, enter the wise guys who run hedge funds who said: “Let’s do some short-selling here to test out the vulnerability of the global economy and these overbought stock markets.”

We now live in volatile times as shown by the first couple of months of 2016 and it’s why I have not crowed about the recent rebound of stocks because in this kind of market-setting you are a rooster one day and a feather duster the next.

The recent rebound was based on a potential production freeze by those ‘reliable’ types called OPEC and Russia and a surprising 18% spike in the iron ore price! Who saw that coming?

The chart shows me this is a buying opportunity and I have been doing that but I don’t know if I will win in the short-term. I might have to buy at lower levels but I know in the long-term I will win. It’s not just this chart but lots of charts that tell me this.

It’s also the fact that over a 10-year period a stock market index goes up by about 10% per annum despite bad years such as 2008 and 2015! The more numerous good years outpoint the baddies, thank God! Or thank Santa!

Times like these are really tough and that’s why I wrote a few weeks back that at times like these I really earn my money. As an economist I love models that explain stuff and I use them to make the complex easy to understand for my clients, my readers, viewers and listeners in my many media outlets.

My favourite model is Rachel Hunter who in doing a Pantene commercial in the early 1990s and she said: “It won’t happen overnight, but it will happen.”

I think this applies to a lot of things in economics and stocks but when it’s not happening it can be frustrating but I say maintain the faith, buy quality dividend-paying companies and don’t be afraid to buy when they are cheaper because the market is panicking.

Remember that CBA was under $30 in 2008. If Zac you had bought only that share, which would have been a bad theoretical strategy — I like 20 stocks in my portfolio — you would be up 160% plus around 56% of dividends and say 7% for franking credits and that’s being conservative, which means you would be up 233%!

Santa Claus and even God might have their doubters but a good group of quality stocks over time you can believe in them Zac, even with crappy politicians getting in the way.