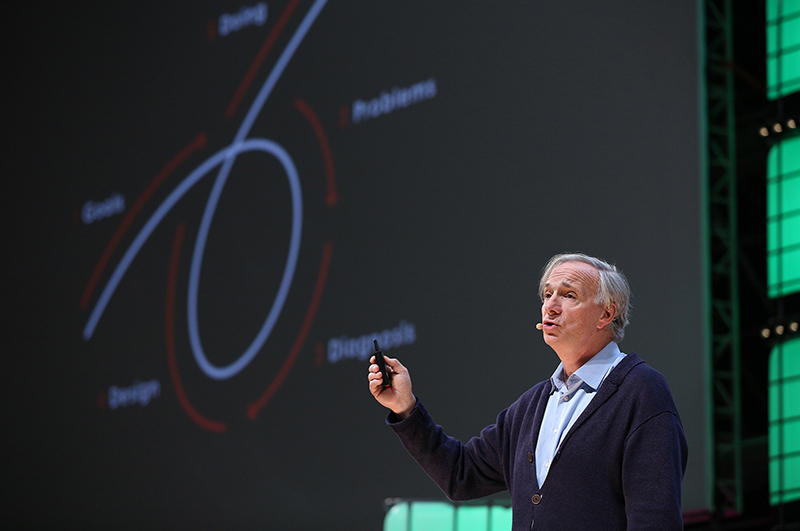 Just when our stock market needs a lead-in for trading today, Wall Street was on a ‘holiday’ to pay respects to the 41st President of the USA, George H.W. Bush, who passed away last week. It means we’re left wondering about the negatives that rolled in yesterday.

Thankfully, we have revelations from one of the smartest guys in the world of money and someone who predicted the GFC, who isn’t seeing the present stock market correction as a crash.

In case you missed it, the Dow Jones index dived 3% yesterday as US stock markets reacted badly to two news flashes.

The first was the bond market’s charts were giving off signals that maybe a recession was heading the USA’s way. This was a shock piece of news that some thought was possible, not probable, in 2020, so the thought it could be closer than experts were thinking spooked the stock market.

The second was the surprise revelation that the Trump trade war truce was to be the 90 days from December 1 rather than the January 1 start date, put out there by President Trump’s economic adviser, Larry Kudlow.

On top of that, locally, we had to digest a slower-than-expected economic growth number for the three months to the end of September, which has raised fears that the RBA’s and IMF’s forecasted 3% plus growth might prove too optimistic.

Economists were tipping a growth rate of 3.3% but it only came in at 2.8%, which is still a good result but you’d have to be a little worried about the 0.3% growth figure for the September quarter. In America, they’d multiply that by four and say we had 1.2% growth, which is a shocker.

However, like a lot of economists, the RBA doesn’t trust one month’s or quarter’s figures so it puts the past two quarters together and multiplies by two for a more reliable guess on what’s going on. On that basis, they’d add 0.9 to 0.3, which is 1.2, and multiply it by two to get 2.4%, which is less worrying.

In economics-speak, 3% plus is a great number, while 2% plus is an OK-to-good one. In our case, we have to hope that this 0.3% result for the September quarter’s growth was a rogue number and not a sign of things to come. Note in September last year, we got a one-off negative number that was countered in the December quarter. (I will do a story on the local run of economic data for the December quarter so far tomorrow.)

But let’s get back to the two spook factors for stocks yesterday and the views on a market crash of Ray Dalio, the hedge fund genius from Bridgewater Associates based in Boston, USA.

I recently read his book called Principles and it was a ripper, aptly explaining how he arrives at many of his on-the-money decisions. And you have to hope the algorithms he uses to dictate his money plays are right.

He was recently interviewed by Business Insider’s Henry Blodget at the publisher’s Ignition conference in the US and was put on the spot about an imminent crash of the stock market. This is how Joe Coelli reported Ray’s response: “The hedge-fund legend was initially cagey in his response, electing to lay out what he sees as ongoing debt cycles of differing lengths. He argued that both were getting old in age, but he wasn’t ready to jump to a worst-case conclusion.”

He looks at the GFC pre-conditions but doesn’t see them as similar to now. “The nature of this dynamic is more of a squeeze,” Dalio said. “This doesn’t look like 2008. In 2007, we would look at the financial statements of entities and see that they weren’t able to pay debt and that we were headed for a big debt crisis. Now it’s not the same.”
He sees debt coming back to eventually bite us but it’s not soon and for someone like me getting the timing right for important things like crashes is vital for the sake of my followers and my own money-making goals.

Dalio’s considerations about how he invests doesn’t ignore geopolitical issues and he looks at the trade war and how the Presidents handle it as crucial to what ultimately happens to stock prices. Only yesterday I discovered 30% of US companies reporting had mentioned tariffs as important to their financial results and these are what determine share prices!
Hosing down the fears that scared Wall Street yesterday was a mature response from the Chinese leadership on the subject discussed by President Trump and Xi Jinping. While Donald was unsettling markets with his confusion on the start dates, China was pledging “to start delivering on trade agreements reached with America..” as Bloomberg.com put it.

“Global markets were left reeling following Tuesday’s steep sell off in New York, but nerves appeared to steady after China’s Commerce Ministry said Beijing will start to quickly implement specific items where there’s consensus with the US…”, Bloomberg reported.

This news settled markets and partly explained why our market ended down 0.78%, while the Dow was off 3%. The Yanks didn’t get to hear the better news out of China but US market futures were positive for tomorrow’s trade.

As Dalio pointed out, this trade war is an enormous challenge for anyone hoping that the current correction is exactly that and not the prelude to a crash. Sure, a crash has to come along eventually, they always do, but experts (like me), unlike a lot of my sideline tweeting experts who are unknown and have no public record, can’t just say a crash is coming and think they’ve done their job.

It’s a hard job but someone has to do it. I’ve been doing it on TV since the middle of the GFC. Most of my big calls have been right and the ‘crash is coming team’ has been wrong for a long time.

I did get my 7000 call on the S&P/ASX 200 index wrong but that was made before the Royal Commission was announced and Donald started a trade war, so give me a break! History has shown my “don’t believe the doomsday merchants now” calls have been right, so let’s hope my good run persists.

The doomsters will be right sooner rather than later but I’m glad Ray Dalio is not in the crash is nigh camp right now. (The full story can be found at https://www.businessinsider.com.au/ray-dalio-bridgewater-associates-next-financial-crisis-how-it-will-differ-from-last-2018-12#jOX44xlDJWUPAFjR.99)