Without controversy and debate, even Pauline in a burka, there is no progress!

Warning: I’m scared to write this story lest someone hits me with a “shame on you” tweet or email criticism, but someone has to have the courage to be inspired by one of the great poets of all time!

Pauline Hanson’s burka stunt in the Senate and some great health work by the BBC’s Dr. Michael Mosley on SBS this week, on what we can do to live longer and repair the internal organ damage we’re doing with our favourite foods, reminded me of one of the most profound messages I have received from a poet.

Yes, Switzer can be a little poetic!

The UK luminary William Blake, who lived 1757-1827, is credited to saying many things that we’ve heard (or should have heard) before such as:

• “A truth that's told with bad intent beats all the lies you can invent.”

But my favourite and decoded for a modern man such as me is “without controversy there is no progress.”

Last night as I drove home from my Sky Busines TV program, ABC radio listeners were outraged at Pauline’s stunt and they loved George Brandis’ impassioned blasting of Senator Hanson, while on Macquarie’s radio network Andrew Bolt and Steve Price and their listeners were asking: “what’s wrong with Pauline’s protest?” 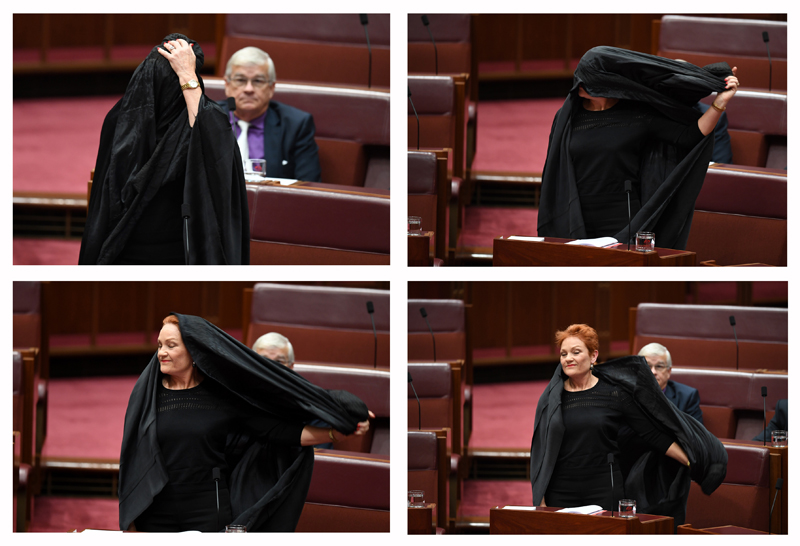 There are Australians who know burkas don't create Middle Eastern bred terrorists and we shouldn’t be discriminatory to all Muslims because of a bad-bunch minority. However, there is a significant number of scared Australians, who fear going to a footie match because terrorism has Muslim-links. For a parallel, think Catholics and the IRA cut-throats of the 20th century.

And our leaders are acting like ostriches with their heads in the sand in dealing with this huge social impasse. Unfortunately, Malcolm Turnbull only has a one-seat majority and that seems to be disappearing daily, as we discover that our parliament is stacked with “foreigners” like Barnaby Joyce. And that means we can’t expect anything courageous, controversial and progressive from our PM.

He just hasn’t got the numbers even to practice being a great leader because some knucklehead MP could go Independent.

The French philosopher, Joseph de Maistre said “Every nation gets the government it deserves.”

Our country needs great leadership right now and it’s as scarce as hens’ teeth. And this is where my story this weekend always wanted to go.

Often, really valuable news is controversial and some people don't want to hear it. But what worries me in this age of great communication and social media platforms such as Twitter, is that we’re all becoming commentators on the run.

Someone says something controversial and we pull out the “shame, shame, shame” cursing and finger-pointing in 140 characters, which makes many good and sound thinkers run away from Twitter and the societal debate we need.

Tribalism has gone mad and the loudest and nastiest accusers are stopping debates that could really help us all!

And this is where some controversial revelations from Dr. Michael Mosley need to be aired as widely as possible for the sake of the human beings I like and love the most!

In a study where he pitted himself against another 50-something from the USA, who had a great diet heavy in plant-based food, a low exposure to protein and who also practised fasting, the Doc’s rival was tipped to live with healthy organs to close to 100 or even higher!

Michael, who looks pretty healthy and whose diet is better than most, given the TV health programs that he has hosted over the years, had blood tests that tipped him to be a candidate for heart issues and diabetes in the not-too-distant future.

Mosley confessed that maybe his occasional exposure to doughnuts and fast food, at times, might be putting his longevity at risk.

One academic researcher out of Washington showed him the longevity benefits of fasting for four days every few months and this body expert argued that it could repair the damage to anyone’s vital organs within a year!

Michael actually did the four-day fast and the tests after the grueling time with no food showed he’d dramatically improved his blood test readings, going from being a normal person bound to be on eight pills a day like a majority of Europeans over 65 years of age, to having the constitution more like an athlete!

The conclusion was that if this could become a regular practice, then we could repair a lot of the damage to our bodies and add years on to our life.

But the good doctor admitted four days fasting was hard — doable, but hard — so he went searching for an easier but just as effective solution.

And God bless America, a more palatable solution was found in Chicago, where another academic showed that if you did alternative day fasting (ADF), you could have the same remarkable impact on your organs.

Michael restricted himself to 500-600 calories on one day but on the next he pigged out at a fast food outlet at the encouragement of his academic food mentor.

Research shows this alternative eating plan achieved the same kind of organ improvement that could be achieved by more ferocious fasting.

I’m not sure what you want to do with this great information — I hope it inspires you to rethink your food choices, at least every second day — but for me it underlines the value of being exposed to great inside information.

I could have watched countless stories about Pauline’s Senatorial stunt on Thursday night on TV but because my wife gave me the tip about the Mosley show, I was shown something that could not only change my life but add years on to it!

This week on my radio show, we had a caller who wanted to develop her parents’ property with her brothers and sisters. She was confused about the legal and tax challenges, so I referred her to a colleague who is an accountant and who develops properties with friends and family.

She will get the best advice and will benefit as a consequence.

On the same subject of expert advice, I was in Canberra this week, as Dick Smith became the Grim Reaper, stealing media headlines and time on air pedaling his concerns about immigration, the environment and taxes. How does Dick get that free media ‘advertising”?

Well, he’s a national legend but pays for help from the likes of Max Markson, who I bumped into in Canberra on the day Dick went to the capital. Funny that.

When John Symond launched Aussie Home Loans that has delivered this astute businessman riches beyond most of our dreams when the CBA bought it from him, it should be noted that he was helped by Tim Allerton of City Public Relations.

John admits he learnt a lot about capturing media support and didn’t he do it brilliantly with his “At Aussie, we’ll save you.”

When we started Switzer Daily we learnt from the smart work Adriana Huffington did with Huffington Post.

It’s the craziest decision in the world to close yourself off from even listening and thinking about others’ points of view. Sometimes it will be a worthless experience, at other times it will be very valuable.

On Wednesday, I was leaving Parliament House after doing my TV show there and the weather had turned nasty. I was planning to walk to my hotel when a Senator with her assistant offered to drive me to the hotel. The Senator’s name? Jacqui Lambie. In the past I had a less-than-charitable assessment of some of her views but I learnt a valuable lesson when I discovered what a nice person she turned out to be!

Of course, it doesn’t mean I now agree with her on all subjects but, by being open on Wednesday, I was taught that a controversial person can actually progress me as a human being!

William Blake was absolutely on the money.