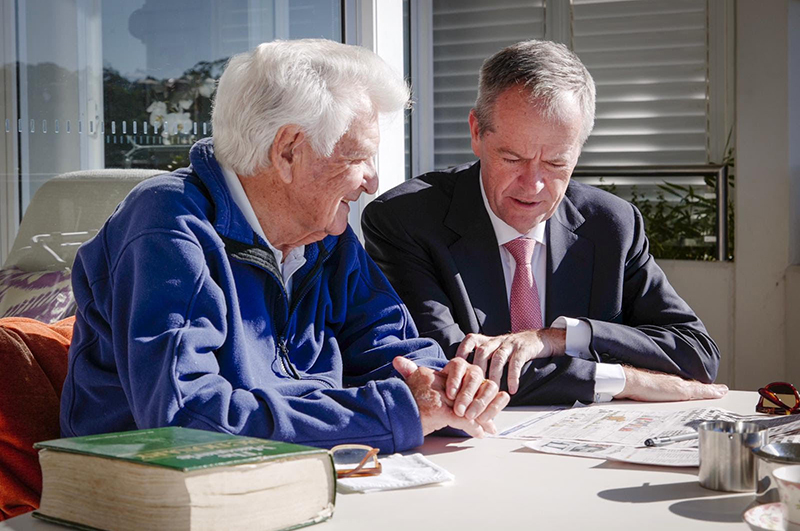 It was interesting that Bill Shorten was channelling Gough Whitlam this week in his speech at Bowman Hall, Blacktown, where the ALP joined celebrities before the 1972 election win to sing the now famous “It’s Time” song. Gough was an inspirational leader but an economic light weight. Ironically, the leader I’ve been hoping Bill Shorten could become — Bob Hawke — passed away last night.

This wasn’t a great week for the economy and history shows Labor governments often cop a crappy economy. And because it’s led by “bleeding hearts for battlers”, if you sum up the messages the Party puts out before elections, they’re OK performers in a weakening economy.

Whitlam walked into the oil crisis of the early 1970s but his policies didn’t help. As Graham Richardson told me in an interview last week, Gough’s appointment of the very left-wing Jim Cairns as Treasurer, “showed us what Gough thought about economics!”

Hawke and Paul Keating won the 1983 election on the back of a recession, where the Budget was deep in deficit and both unemployment and inflation were sky high. The jobless rate was around 10%, with inflation around the same mark!

Hawke and Keating not only became different leaders in themselves, deregulating the financial system, floating the dollar, winning the unions over to the Accord to link wage rises to productivity and tax reform, they even dismantled trade protection, which helped explain why our economy has grown for 28 years without a recession!

That story was helped by John Howard and Peter Costello but since the GFC, the reforms haven’t been memorable, though a lot of that was because of the GFC, which was largely created by crazy lending in the US and the failure of debt rating agencies to properly rate collateral debt obligations (or CDOs), which were thought to contain basically AAA home loans. However, they were stacked with sub-prime or NINJA loans, where the borrowers had no income, no jobs and no assets!

This was a Great Depression in the making. The fact that we didn’t see unemployment go over 6% shows Kevin Rudd and Wayne Swan did the Labor thing and threw money at the problem, and it worked.

Unfortunately, Labor’s infighting and leadership changes meant that politics dominated over sound economics and the results weren’t great. Under Tony Abbott and Malcolm Turnbull, the Coalition suffered the same leadership weaknesses. At least under Turnbull and Morrison, their “jobs and growth” platform at the last election has worked out and the Budget’s last reading was a surplus!

So do we need a Gough-Shorten or a Hawke-Shorten, given where our economy is heading?

This is an easy question to answer: it’s a Hawke-like leader we need with the economy challenged by a slowdown, falling house prices, both business and consumer confidence weakness, a banking system not lending enough following the Royal Commission castigation process and a global economy challenging us with digital disruption, as well as someone called Donald Trump, who’s trying to mess with our most important export customer — China!

Happily, the Treasurer-in-waiting, Chris Bowen, is said to have studied Paul Keating, though I don’t think he has shown the ability to disagree with his leader like Keating did. The strength of the Hawke-Keating partnership was the differences they brought to the table. Hawke was the most economically-trained PM ever, though Keating, who learnt on the job, picked up the knowledge faster than anyone I’ve seen. He made mistakes on interest rates in the late 1980s but so did the rest of the world’s central bankers, as deregulation brought with it monetary policy challenges never seen before.

But on the big issues, except on the tax package of 1985 (which was to bring a retail sales tax or RST which was like a GST in principle), Hawke and Keating had guts. They took on their own Party, the unions and business. With business, they understood that their Government had to work hand-in-glove with the job-makers and investors, who would not only help raise the lifestyles of Australians but ensure they remain in power.

I always remember Hawke explaining his un-Labor policies to a probing and biting journalist like Richard Carleton, where he said something like “I can’t do anything for my constituency if I’m in Opposition.”

That was reality and good sense that I hope Bill Shorten can embrace, if he wins tomorrow. I hope he and Bowen will look to Hawke and Keating rather than Whitlam and Cairns.

When Whitlam lost the 1975 election, Tanberg penned an apt cartoon that showed Gough sitting in a classroom with Malcolm Fraser sitting behind him like a pair of school mates.

On the blackboard was the word: “ECONOMICS” and Gough was talking to Malcolm saying: “This is a great subject. I failed it last year!”

If Bill wins, I hope he understands what Hawke understood. I said it in yesterday’s column but here it is again: “It’s the economy stupid.”