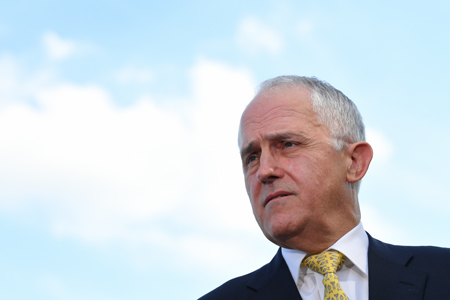 Winners don't threaten to quit. They win. So win Malcolm!

Apart from overrated organizations such as credit ratings agencies like Moody’s that have slightly downgraded our big four banks and Tony Abbott, who would be ‘king’, again, the Aussie economy is doing pretty well.

Of course, the latter problem would be less so if Malcolm Turnbull was performing like a real winner, rather than just an OK leader who thought it was a good idea over the weekend to tell us he’d quit politics if he lost the top gig.

I can’t see that as a great way to win over those who don’t think he’s a strong leader. The old “I’m taking my footie home if I’m not captain” stunt never worked in the park when we were young but I guess MT didn’t learn that.

These three stories are all related and things have to change. And it’s up to the PM to start playing a stronger game or else Tony might be king again before being beaten by Bill Shorten at the next election.

Quite frankly, I prefer to stay out of politics but I venture in when the cream of the crop — or is it crap? — threatens the economy.

Now recall that despite Malcolm’s average performance in the opinion polls, in terms of consumer confidence, business confidence and business conditions, readings are above their long-term averages.

Business has given Malcolm the thumbs up, or at least don’t see him as a negative.

Consumers are less excited by the current regime, mainly because wage rises are very slow and too small and, on a weekly basis, negative headlines about housing busts, rising interest rates, leadership challenges and debt ratings bad news could not make normal people think that Australia is the best economy in the world.

That’s despite the fact that it has grown for over 25 years without a recession, which actually makes us a world champion of growth. We avoided a recession when most of the world succumbed to one during the GFC.

And right now, the Reserve Bank thinks we’ll grow by 3% a year over the next couple of years, which should KO Moody’s fear of a housing sector problem. Then a former RBA director and smart economist in John Edwards goes public with the notion of possibly eight interest rate rises ahead.

Of course, that spooked the horses even more, giving the media more scary headlines to worry consumers.

John’s probably wrong but, if he’s right, then this would be a gangbusters scenario and would mean wages would be rising. Higher wages would force up inflation and then the RBA could push up interest rates. As I say, however, this would be in the context of an Australia doing well not badly.

And anyway, I bet you that most borrowers have not over-borrowed, unless the banks are run by idiots. Their track record and share prices over time tell an entirely different story.

What I’m writing here is the alternative narrative and the one that needs to be given a chance in the public forum. The media doesn’t need to run this line — it’s not its job to do so, though I wish it would for the sake of the economy, consumer expectations and for job-creating opportunities. But as I say it’s not the media’s job. It’s Malcolm’s. And that’s why he should stop talking about quitting. Instead, he should get on the front foot and start talking up the Oz economy. In doing so, he’ll create the economy/country that no one will take from him.

I hope someone makes him read my column today before it’s too late!