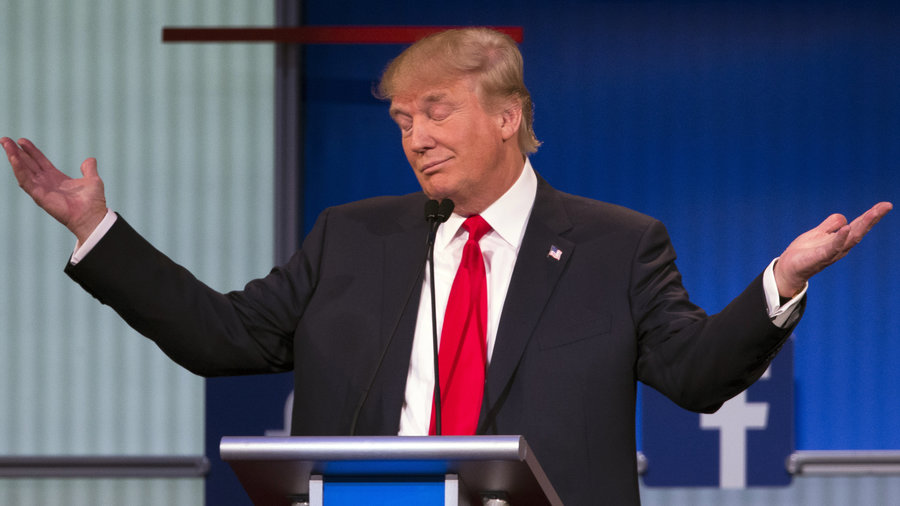 Will Donald bump, thump and trump our stock market and super again today?

Trump-lovers are going to have to stomach more economic losses today on the stock market, with investors and anyone with a super fund set to become poorer because of one guy — the US President!

Despite better judgment as a sensible human being, I was prepared to ignore Trump’s history, which could be summed up as innovative and entrepreneurial, yet flawed as a human being.

He has been a genius brand-builder and understands the market he sells to, as his election win proves. However, to date, he hasn’t shown himself to be a brilliant politician.

Of course, his supporters (right-wing ideologues, cheesed off working class and middle class America and anyone sick of the past passing parade of political pygmies that have dominated US and world politics) might disagree even now but they don’t care about their personal wealth.

Donald is becoming an economic punishment and today our stock market will again show as much.

He won because he looked better than those politicians, who have done great impressions of pigs with snouts in the trough while ignoring the denigration of societies and economies. Hillary Clinton was seen as the poster girl for old politics, while Donald was the new kid on the block, promising things could be different. Here Pauline Hanson, Nick Xenophon and even the Greens chase the disenchanted voter but none of these players play as convincingly, pre-election, as Donald.

I get why Trump showed up and was supported but I hoped he could pull off the task of being a national, or more rightly, an international leader that might bring some positive political change. However, that was me giving him the benefit of the doubt, though it was understandable following his acceptance speech, which I watched live on my Sky Business TV show.

That was an inclusive speech and it helped Wall Street change their view on Donald. The stock market spiked and it led to a worldwide surge in stocks. But then the tweeting resumed and they remained as crazy and unsettling as they were before the election and the threats of trade war became the camel that has broken the back of the stock market.

In case you missed it, like most news services, the Dow Jones index was down 572 points last Friday and it was Donald’s threat to bump up the Chinese tariffs by an extra $100 billion and China’s return fire to add more US products on its slug-list, such as iPhones, that sent stocks plummeting.

The local futures suggest we could be down 33 points when the stock market opens, which could mean over the day we could slip below 5700 on the S&P/ASX 200 index. And we haven’t been there since October last year.

When Donald was not hunting the Chinese with tariffs and tax cuts dominated his tweets, we were at 6121.  Since he’s switched to tariff tweets, we’ve lost 6.2%. And if this trade war teasing between Donald and the Chinese continues, we could see stocks continue to slide.

The S&P 500 index, which measures the stock price performance of the top 500 companies in the USA, has fallen through its 200-day average recently and is close to doing it again.

This make negative types (bears) think a big correction or even a crash is coming, so they sell stocks, while positive types (bulls) think it’s a buying opportunity.

I’m still in the latter camp because I don’t believe Donald could be so dumb as to cause the full on trade war. I don't think the Chinese are so dumb but we are looking at a testosterone-charged poker game, with the US bluff merchant dealmaker up against a Chinese leader, Xi Jinping, who has convinced the country to make him leader for life!

As a Donald doubter from the outset, who was prepared to back Wall Street’s new view on him following his acceptance speech, I’m running out of good reasons to give this US President the benefit of the doubt!

I’m currently betting that he doesn’t cause a trade war and I’m buying stocks but I am buying stocks that will pay me income if he causes a crash on the stock market.

Fairfax’s Timothy Moore quoted Lenore Hawkins of Tematica Research to put Donald’s impact on the market into context. “Barely three months into the year and there have already been 22 trading days in which the Dow traded in a 400-point or greater range versus just one day in 2017.

"The average number of sessions in a year with swings that great is all of 2 and the only time in history where we've seen such heightened volatility was between October 2008 and January 2009."

That was when the GFC decimated the stock market with a 50% slump!

Fortunately, the US and global economic and corporate earnings outlooks are very promising but a full on trade war would send analysts into recalculation mode. And in the age of computerized selling and huge ETFs in the USA, Donald’s tariff-teasing tweets could cause a crash!

I’m betting against it but I do so with decreasing confidence, daily!

Reporting season starts again in the US this week and the tip is profits of the S&P 500 group of companies will be up 18.4%. Realistically, in a more sensible political setting, stocks should be heading up but Donald’s unpredictability is spooking stock players and hurting our hip pockets.