Over the course of this week, as the south of the USA struggled with hurricanes, I was sucked into a storm with the legend of retail Gerry Harvey, who blew off at the media, institutions, retail analysts and his mortal enemy — short sellers.

Oh yes, there’s another new stress factor in his life called Amazon, which pits our homegrown battler-turned-billionaire against one of the world’s most successful new age billionaires in Jeff Bezos, the brains behind Amazon.

Amazon has become a business-killer, so expert retail analysts are nervous about what the big online operator might do to our retail sector.

The guys at Citi research think the likes of JB-HiFi, Super Retail Group, and, of course, Harvey Norman, will be affected by Amazon coming to town. And only this week, we learnt that they plan to be here in 60 days!

This could make them a fly in the ointment for our retailers, who love the December-January Christmas sales period because this is when many of them make their real money for the year.

In the USA, the Friday after Thanksgiving is actually called Black Friday, not because of anything spooky but because it signals the start of the holiday shopping period for the Yanks, when many retailers get out of the red after making losses all year and sell their way into the black!

On Wednesday, I popped out to Gerry’s head office beside Flemington markets to interview him about his recent company reporting. Despite a record profit, his share price has dropped about 12% and part of this was due to a dividend cut but a lot of it gets down to the Amazon effect.

Gerry told me he is sick of hearing about Amazon and that the media and retail experts who tip he’ll be ruined by one of the world’s most successful business growers and, at the same, time a prodigious business-killers of all time, have got it wrong.

Of course, it’s in his interest to know what Amazon might mean to his business and I suspect the experts, who have marked his company down, might be underestimating how this old dinosaur (as some media commentators have tagged him) will do to compete with the barbarian at our retail gates.

Before the interview, Gerry read out a newspaper story that suggested he was a retail dinosaur and, as chairman, should sack himself because he just doesn’t get the new online world.

He pointed out that this story was dated 2012 and said that since that time, this old dinosaur’s company has grown in value by a mere billion dollars!

Not bad for a dinosaur.

The ultimate test about Amazon and Harvey Norman will be what happens to the share price over the next few years but I reckon over the next one or two years Gerry will have the last laugh over some of his critics, in particular, a short-seller called John Hempton from Bronte Capital.
John was surprisingly named by Gerry in my interview, which led to a twitter storm. 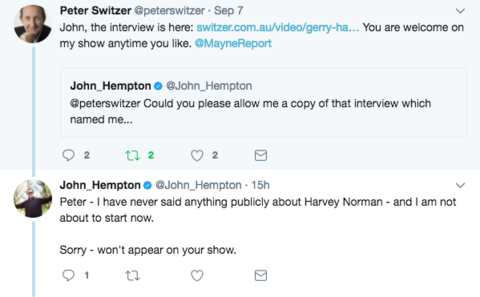 The AFR’s Rear Window picked up the story too because you don’t often see a CEO or chairman go after those who are hurting their share price.

From my point of view, I don’t know if he’s right when he says he’ll not only survive but thrive in the future Amazon-infected retail world but I hope so. And if passion has anything to do with it, I think he and his wife and CEO, Katie Page, have a good shot at being a formidable foe for Amazon.

People like Gerry Harvey should never be underestimated because they love what they do. And as he admitted to me, he has always been a big dreamer.

He said when he first was married as a young man he told his then-wife that he wanted his name in lights across the city. “Maybe I thought it might not happen but still I had to believe it,” he told me.

Personally, I learnt a long time ago from one of the country’s best business speakers and successful business builders, Tom O’Toole — the Beechworth Baker — that you have to “beware of dream-takers.”

These are the negative and the too cautious people in the world, who for them, the glass is half-empty and not half-full. They not only don’t have dreams, they can kill others’ dreams.

Our greatest role in life, I believe, is to tell yourself and the young people you influence that they have to have dreams and they have to fight those who would take away their dreams.

The fund managers who have to cautiously manage other people’s money and retail analysts, whose assessments influence investors, also have to be wary of big changes, such as the arrival of Amazon, but their scenarios are still based on guesswork.

They are the antithesis of someone like Gerry and other entrepreneurs out there, who have dreamt big and have beaten the odds to create hugely successful businesses.

Right now John Symond is in Europe on his yacht celebrating his 70th birthday with friends and family, after creating and selling to the CBA his beloved Aussie Home Loans.

Like Gerry, John risked it all to create an enduring business brand and has defied the critics and the experts who at first could not see how anyone could take on the might of the big four banks and win.

I can honestly say that I don’t know how Sir Gerry will do slaying the Amazon dragon but if how he and Katie wake up each morning has anything to do with it, Jeff Bezos might be in for a surprise.

In the second interview, I did with Gerry, which was based on 10 questions meant to explain how he succeeded in building Harvey Norman, he gave insights into what powers and drives people like himself. And in doing so, he underlined why he hates with a passion those who would downplay the importance of his and Katie’s dream and who sell his Harvey Norman short.

This helps you understand Gerry Harvey in his own words:

“I’ve got a wife called Katie Page and together I don’t think there is a better husband and wife team in the world! There might be some as good but we’re a team and we’re up at 11 and 12 at night fighting about the business. We wake up in the morning and I say I’ve got a good idea and all that sort of stuff, and it puts a pressure on our relationship but we can both take that pressure. We’re only doing that for one reason to build this company! Sure, you get a certain amount of money but I don’t need any more money, do I? She doesn’t need any more money, so the only thing we want to do now is working out every year how are we going to make Harvey Norman this bigger, better company. And we work at it.

At the moment she has gone to China to look at the three best retail shops in Beijing and Shanghai. Then she jumps on a plane to go to Ireland — we’ve just opened the big signature store in Ireland — we own the property, we developed it ourselves — and it will be our number one store in Dublin…She works her arse off, no one works harder than her but why does she do that? It’s because we are trying to make Harvey Norman this wonderful company and when we see how we are treated by certain people — short-sellers, analysts and all that, we look and we think ‘what the hell are they on about?’ Do they know how hard we work? Do they know what our ambition is? Do they know we’re trying to build this into a company that’s like, (sic) in all of these countries around the world, we’re going to be the best retailer in Australia, we’re the best retailer in New Zealand and yet we’re being treated as if we are terrible at what we do! To us that’s hurtful.

If you want to hurt me tell me I’m a dinosaur, tell me I’ve lost it, tell me I don’t work hard, tell me that I’m not looking after my company, if that’s want you want to do, if you want to hurt me, that’s the way you do it, because that’s all I care about — building this company. And if you as a shareholder out there, if you are a shareholder in Harvey Norman, we will look after you but if you are an institution, right, I couldn’t give a stuff, right, I wouldn’t trust you as far as I could kick you, OK?”

I said last night at the end of this interview that I’ve never seen a CEO or chairman with such passion for his or her business, though Richard Goyder at Wesfarmers has come close, albeit in a more measured way!

By God I hope this legendary Australian who started his life in virtual poverty comes out on top with his battle with that business-killer called Amazon.

If he doesn’t, there might not be a God in heaven.