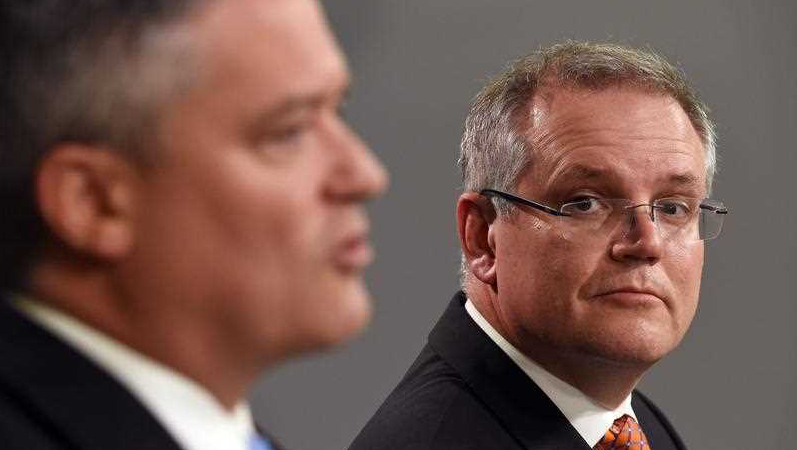 Why Scott Morrison has to wow us today with his why!

Today my ex-student, Scott Morrison, will make the pitch for tax cuts for some of our most important companies. This coincides with a report from the Productivity Commission, which is a boring sound of body, but generally what they advocate can be controversial, while they often promise exciting economic outcomes.

Yeah, I know “economic outcomes” sound boring too, so let me put what they’re promising in to hip pocket context. Big changes to obstacles can mean:

When you look at it, if the Productivity Commission gets it right it delivers steps toward economic heaven, so what they recommend at least deserves most Australians to show the people involved a little bit of respect.

Apparently, Scott is going to pitch that he thinks company tax cuts are now “urgent”, especially when the Donald Trump lower taxes plan looks increasingly more likely to get through Congress sooner rather than later.

I know Donald has had trouble with Congress and even with his own Republican Party members, who have voted against bills, such as his re-working of Obamacare, but with about 12 months to the mid-term elections, the Republicans have to come up with a big winning play ASAP or else they’ll be decimated at the polls. This could be the prelude for Donald becoming a lame duck president, with no influence over Congress when it comes to the big reforms he promised pre-election.

Can you imagine smart alec journalists delighting in called him a “Donald Duck” president?

Scott will link the need for bigger company tax cuts to increased investment, which in turn lifts productivity — that’s a bigger output return to business from a given amount of labour and machines, etc. used to make this output/production.

Take it from me, an economist, that productivity is the gift that keeps on giving for a long time but the question is: how do you get it?

Changes in government regulations, such as changing penalty rates for weekend work and on public holidays, is a case in point. When the Hawke Labor Government floated the dollar and deregulated the financial system in the 1980s, it led to productivity. When the same government took away tariffs and other measures to simply protect local industry from competition, it improved our productivity, as well as our international competitiveness. This partly explains why we have broken world economic growth records.

When these changes were made, it created enemies for Bob Hawke and his Treasurer Paul Keating and they weren’t from the big-end of town. There was a lot of hate from their buddies in the union movement.

Big changes affect groups who are beneficiaries of the status quo but we know the great entrepreneurs, such as Richard Branson and Aussie Home Loans’ John Symond take on the status quo and change industries forever.

Think about the impact of Symond taking on the banks in the early 1990s, which instantly lowered interest rates by 2%! It led to other changes, such as the arrival of mortgage brokers, and we now can go online to find the best interest rates in town. And those changes didn’t start with John but with Hawke and Keating’s financial deregulation.

Similarly, John Howard’s GST and the related tax reform package has put another shoulder to the wheel to explain why we’ve grown 26 years without a recession. We rely heavily on foreign capital funds because we have a small population, and therefore small savings, but we have big ideas: BHP, the big Australian and second biggest miner in the world behind Glencore, is a case in point.

So Scott will tell us how important productivity is and I hope he uses a script as good as the one I have outlined above to sell these bigger company tax cuts. This speech is going to be pivotal to the success or failure of the Turnbull Government because it has to be convincing.

The crazy Senate has said no to $26 billion worth of company tax cuts linked to bigger companies, though it has accepted $24 billion of cuts for small and medium businesses.

Right now, Trump’s tax cuts have got the UK and France looking at company tax cuts to encourage investment from business so if our taxes are too high, money will go elsewhere, especially when the Government is cracking down on big foreign companies dodging their tax responsibilities.

Fairfax says the Treasurer thinks it’s harder to sell reform nowadays because we’ve gone so long without a lesson-teaching recession. And he thinks we’ve become skeptical about change, but I’d also throw in that we’ve been uninspired by politicians.

They’ve become a disappointing lot so it’s time for some inspiration. Treasurers like Keating and Peter Costello could sell the dream or the sizzle and once they got the country on board, they worked on delivering the sausage.

It’s expected that Scott will make references to what is needed to ensure our health system remains viable and world class. There will be proposals for university reforms and better ways to fund infrastructure.

Infrastructure sounds boring but CommSec’s chief economist Craig James recently calculated the upcoming infrastructure boom could be 150% bigger in terms of the demand and growth it generates than our most recent mining boom!

Labor and the Greens, along with some grandstanding Independents, are winning political points over the Turnbull Government but they’re taking away economic points that could determine how many Australians are in, or out of, work. It could also determine how quickly we reduce our Federal Government’s Budget Deficit and overall public debt.

Tax experts such as Arthur Laffer argued to President Ronald Reagan that tax cuts can lead to greater tax collections, as it creates economic growth and reduces the incentives to pay smarty lawyers and accountants to help minimize tax.

But this is all economics, which is not a great tool for selling something. In his book Find Your Why, Simon Sinek explained that we buy mainly from the part of the brain that is emotional and we often ignore the facts and details.

Scott has to appeal to our ‘why’ today or it will be seen as just another boring, productivity, eco-speak speech.

If the Treasurer doesn’t raise our expectations today, then it will be another nail in the Turnbull coffin.

Beam us up, Scotty!