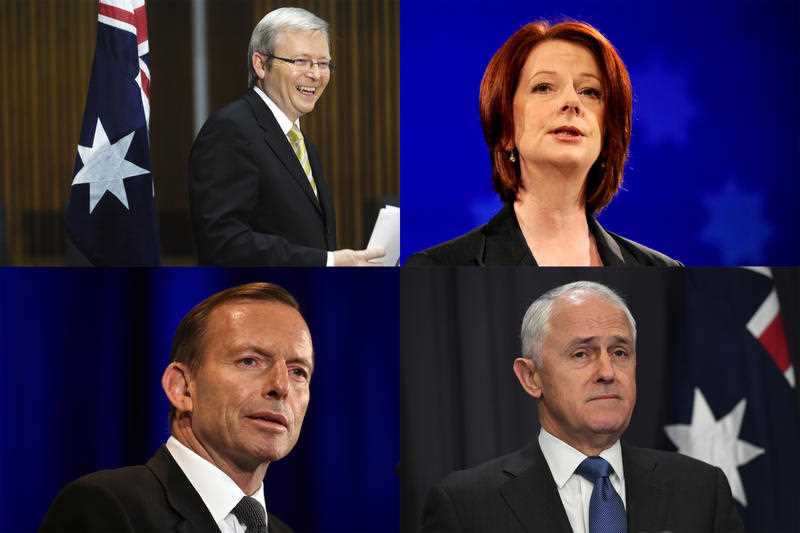 Why I disagree with Bolt. It's the economy, Andrew

It’s economically relevant that Wall Street has given up over 370 points on the Dow Jones, as Andrew Bolt, my colleague at Sky and 2GB, took issue with my argument that changing leaders doesn’t make sense, given what we saw with the Rudd-Gillard-Rudd revolving door pre-Abbott.

He thinks the more honourable loss of Mr. Rudd was better than the likely whitewash that looked on the cards before Rudd recycled the knife that his assassin used on him!

When it comes to politics and climate change, Andrew has done plenty of homework. And while there are a lot of seemingly sensible people who take issue with him, I’d generally prefer to give him a wide berth on these subjects.

Unlike many of his critics, I actually listen to Bolt after I finish my Sky News Business TV show. It takes 22 minutes for me to get home either from my Sydney or Melbourne studios, so on his own admission, I know that economics isn’t his strong suit.

In fact, only this week, he and his co-host, Steve Price, made a mutual confession about their relative weakness about something I’d call my long suit.

Putting aside that the Labor switch to Rudd did not deliver a win at the election that saw Tony Abbott swept to power, my actual point in saying dumping Turnbull brings with it two risks. The first is that it would make it easier for Bill Shorten to win the next election, in my opinion. However, more importantly, another change in Canberra could deliver a confidence slump the economy does not need.

Some of us have been scratching our heads on the NAB’s numbers but the business conditions readings are high and have remained high for some time. And business confidence kicked in with the latest reading.

The day before the Budget, where Treasury came out with future economic growth guesses that were actually less rosy than the Reserve Bank’s only a couple of days previously, NAB’s economics team gave us latest business pulse reading.

By the way, that business confidence reading was a seven-year high!

One of the great pluses that Donald Trump has for the US and global economy is his economic reform policies — especially his lower tax rates. However, if his big foot-in-his mouth problem leads to a political drama, such as impeachment proceedings, then the stock market and the economic promise he brings could go down the proverbial toilet!

Politics isn’t always crucial to markets and the economy but at times it can be pivotal.

Tony Abbott is a mate of Andrew Bolts and I quite like Tony myself but his performance as a communicating PM was weak. Malcolm has to lift the way he talks to and relates to the people he leads but, given there are no inspirational rivals on either side of politics right now, I wouldn’t be taking any risks with business confidence, let alone business conditions, right now.

By the way, Andrew relies on News Corp’s Terry McCrann for many of his views on the economy. Only recently, the latter admitted on my TV show that he was more positive about our economic future than he was, say, six months ago.

That said, like me, I don’t think he expected Donald Trump to get himself into his current pickle so quickly, after sharing classified info with the Russians.

I’ve been prepared to put aside my good judgment on Donald Trump as a US President for the economic and stock market pluses he (potentially) could bring. If he screws up, however, he could trigger a 12% slump in stocks (pretty well the rise he has brought to the table since November) and that would bring home loudly how scary political turmoil can be.

One final point on Andrew’s reply to me. He pointed to the smart replacement of Bob Hawke with Paul Keating and said if you try a replacement, make sure it’s a better one.

Because of most of his economic reform achievements, I’m a Keating fan, though he mucked up interest rates. My political memory tells me that Paul won his only election primarily because of my old UNSW professor, Dr. John Hewson, who thought it a good idea to win an election for the Coalition with a 15% GST.

Hewson once said on my TV show, that GST idea and the entire Fightback! package was the longest political suicide note in history.

Not even John Howard and Peter Costello could have sold something as scary as that!