The more you care about your super, the more rewarding that super will be.

Why does super face a Dangerfield Syndrome? It gets no respect!

But there was a less celebrated benchmark reached when compulsory superannuation marked its 25th year of operation. This was one of Paul Keating’s crowning glories as a Treasurer. Younger generations will eventually retire with super nest eggs way over a million dollars. For many, it will be over two million bucks and they should occasionally recognise what good government policy can achieve.

Given the undisputed greatness of super, my big question is: why do we disrespect it so?

Seriously, even with the annoying rule changes that governments impose on super, it really has been a great performer.

Warren Chant, the founder of the super-watching business — Chant West — actually created a business around super and really should send Paul Keating a Christmas card each year!

A growth super fund is a common one used by many Aussies, which has 61% to 80% invested in things like shares and other high yielding assets. These funds aim for a 3-4% return, after inflation and fees, over a five-year rolling period.

These funds plan for one bad year in five but the actual 25-year story is one of outperformance.

However, our flagship super funds have averaged 5.8% over inflation. And remember, this number is brought down by the dud funds out there, though even those aren’t all that bad. These second raters just can’t compete with the best funds out there.

If you need to know the good’uns, have a look at the table below from www.superratings.com.au: 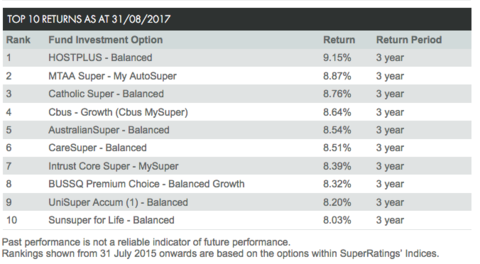 (The creators of these comparison tables have to say that “past performance is not a reliable indicator of future performance” but I’d rather a fund that has done well over three, five and 10 years, as it indicates a consistent, successful strategy.)

Good super funds compare well with very good suburbs for real estate, as the table from two years ago shows: 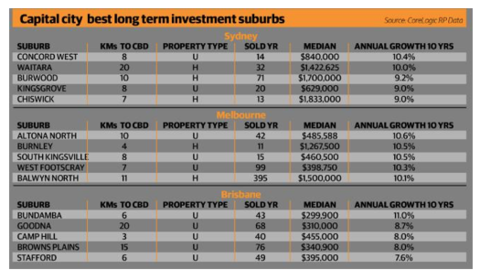 As you see, returns of 8-11% define great city suburbs, much like great super funds but why does real estate get so much love and respect while super gets treated like that legendary comedian, Rodney Dangerfield, who often complained that he got none!

Like most Aussies, I love property but I think it’s time we talked up the need for our countrymen and women to get up close and personal with their super fund. Dare I say, love your super like you’d love your house or investment property?

So how do I know that most people treat their super with disrespect? Well, I’ve been doing radio and answering questions on super for decades and have talked to our financial planning clients over the years.

They tend to know their fund and their returns but they seldom know the fees their pay, the comparative fees of other funds and their better or worst performance. These are vital issues and selecting an expensive, poor-performing fund is like buying an expensive house in a suburb next to a nuclear reactor!

Let me show you what happens if someone goes into a dud and expensive fund by comparing what happens for a savvy super-person.

Imagine a 21-year-old is left $50,000 in an inheritance, which she puts into a super fund that charges 2% and performs below average. Let’s say the net return after fees is about 6% while a better fund comes in at 9%.

To summarise, the savvy supergirl retires with $3.2 million on top of her regular super, which could be a million or more, while the super disrespecter only pockets $800,000 and has to work an extra year.

I reckon this example, which I conceed could be tweaked for other realities, still proves the point that the more you care about your super, the more rewarding that super will be.

That’s a big price to pay for not respecting your super that already takes 9.5% of your pay each week.

When it comes to really knowing and respecting your super, imagine you had a great property that delivered you rent of $100,000  year. Further assume this is your only source of income in retirement because you, as a self-employed person, chose this investment property over a super fund.

Would you know all about it? Would you know if you were getting a competitive rent? Would you have a good idea of what it’s worth and would you look after it as your hen that lays the golden nest egg for your retirement?

To all questions the answer clearly would be ‘yes’. That’s why anyone reading this who’s indifferent to their super should start putting super out of the Dangerfield syndrome.

For many of us, our super funds could be worth more than any property we might buy and so they certainly deserve respect.