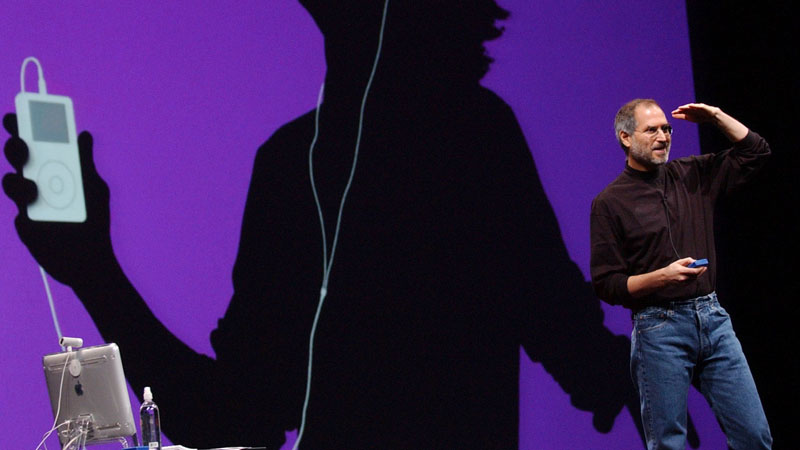 Why do we buy some leaders and reject others?

Since the November 8 Trump-shock I’ve been trying to work out why some leaders can achieve massive buy-in from voters, consumers, employees, sporting team players, etc., while others, even if they’re good performers themselves, just can’t get the results that great performers can pull off.

Hillary Clinton has been an impressive performer in the past but those US election results show she has lost something, or maybe, given she lost to Barack Obama in 2008, she never had it.

She was good but maybe not great.

Simon Senek is a thought leader who has worked for the RAND Corporation and his TED Talk is in the top 20 of the most watched ever. He argues we buy from people and businesses because of what they believe and not because of what they say. He says great leaders have something special that inspires action, but best of all he gives us clues how we too can get inspirational, so let me explain.

Sinek ponders why Apple gets it so right but its rivals have really struggled. He argues they're all computer companies but Steve Jobs and his team killed his rivals year after year.

He also wonders why the Wright brothers were the first to fly?

His research tells him that many standout leaders and high achievers act in a similar way but in the opposite way to just about everyone else!

He says the sales process can get down to three big questions: Why? How? What? So it goes, say in an ad, this way: “We’re selling the best computer ever and you can buy it here and you’ll love it.”

To explain it, he draws three concentric circles with why on the inside, how in the middle and what on the outside.

Most businesses advertise with what to how to why. They think telling us how great their product is will win us over. They’re moving from the outside circle to the inside circle in three steps when Senek says exceptional businesses or influencers go inside out.

We all know what many businesses do and how to access it but many don’t know why they do it.

The majority of businesses and people trying to influence others operate outside in, but the inspired businesses and people act from the inside out! (This reminds me of one of the greatest stories I have come across for inspiring young people to read but I will share that with you at the end of this explanation of how to get people to buy into you.)

Most computer companies would tell you what their new computer will do. They say how it's powered by XYZ but they won’t tell you why they made it. And they then ask, would you like to buy one?

He says Apple let’s everyone know they think differently and their products reflect this and that’s why they’re not only consumer-friendly, they’re designed to look lovely. And oh yes, they do sell a computer but as we’ve seen in the past their invitation was not to buy their computer but for us to “Think different”.

“People don’t buy what you do they buy why you do it,” Senek argues.

When I heard him say that it made me think about why we started Switzer Financial Planning. For years I had been asked to help manage people’s money but I was an economist and financial education commentator but was not a qualified financial planner. As a consequence I’d refer these people to planners I trusted but I soon realised that others in their business were doing the work.

So we decided to get me qualified and we started the business with the promise “Guidance you can trust”.

We knew we could not damage our great brand name by being untrustworthy so we rebated commissions, where possible and charged flat dollar fees. We started our business from the inside and our why was we wanted to give honest financial service because people really do need money help.

Because Apple has won us over on its why, it means we were happy to start with say Macs, then we tried iPods, then iPhones and then iPads. The relationship was so solid that where Jobs/Apple led, devotees followed. They would line up for kilometres for a new product and pay more than others some months later but they were hooked.

What drives such connection? And wouldn’t every business, employer, parent, sporting coach and potential lover love to be able to master this?

Martin Luther King did it in the summer of 1963 with his famous Washington “I believe” speech where 250,000 people showed up and a quarter of them were white! Unlike new age politicians, Dr King did not say “I have a plan!” No, he emphasised “I believe!” 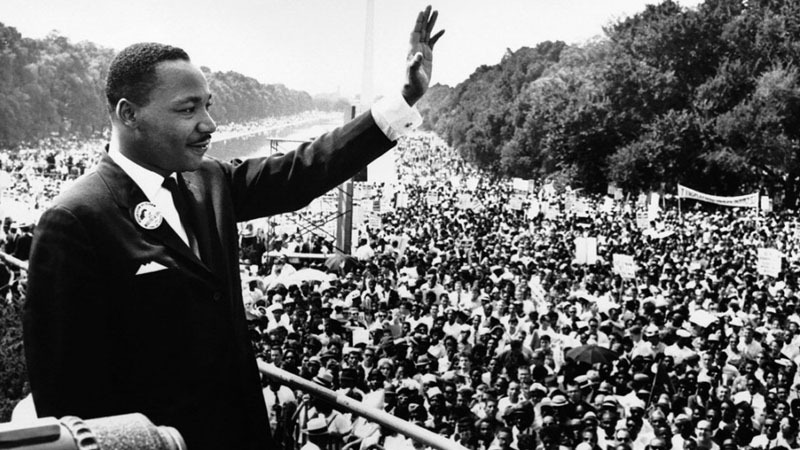 And it’s not a psychological thing this connection, but is actually biological! It happens to be a brain thing.

The brain has three components. The neocortex corresponds to the what circle as its responsible for our rational and analytical thought. The middle two sections make up our limbic brain, which is responsible for all of our feelings like trust and loyalty. It’s pairs up with the why circle.

The limbic brain is critical for decision-making but does not, according to Senek, have a capacity for language, which is housed in the neocortex section of the brain.

He points to situations when someone gives you a whole pile of facts and figures and you say “I hear it all but it doesn’t just feel right”.

In the early 1900s Samuel Pierpont Langley was a well-connected Harvard scientist and inventor. He had a pile of money and great people thrown at him to invent a plane that flew and he was such a hotshot that the New York Times constantly tracked him to get the scoop of seeing the first man to fly.

But in Dayton, Ohio, Orville and Wilbur Wright beat him to the punch pulling off the first successful flight on December 17, 1903. These guys ran a bicycle shop and had a team with not one college degree between them. They were enthusiasts driven by the why, while Langley was doing it to be famous and rich, so when he lost out to the Wrights he disappeared and gave up.

Senek says the Wrights succeeded because they sold the why to their followers while Langley was all about the what.

Senek points to TiVo as a classic case of a company that sold the what but should have sold the why.

This business was set up to cut out ads from TV programs, do replays, slow motion replays, pause live TV and whole lot of things we should’ve liked but the business has been a plodder. Look at its share price chart: 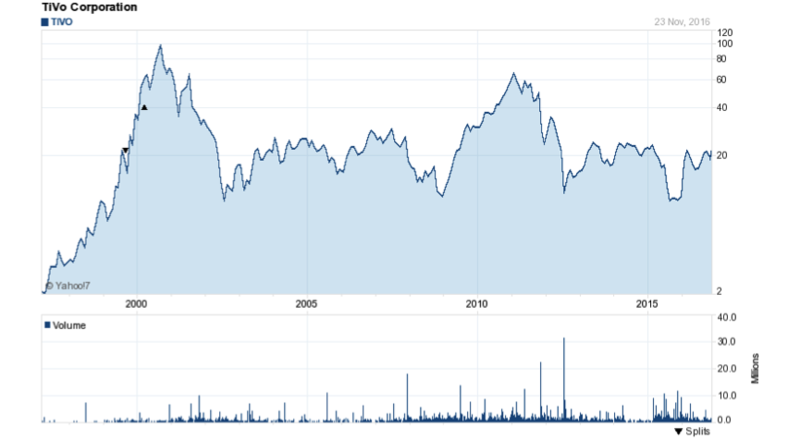 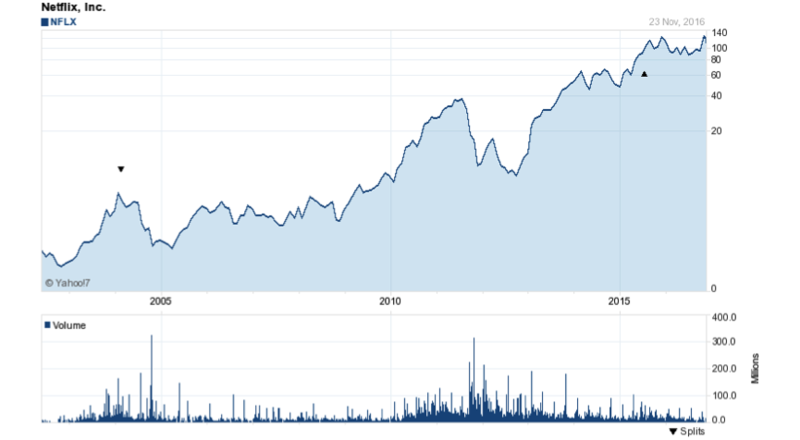 And what about Apple: 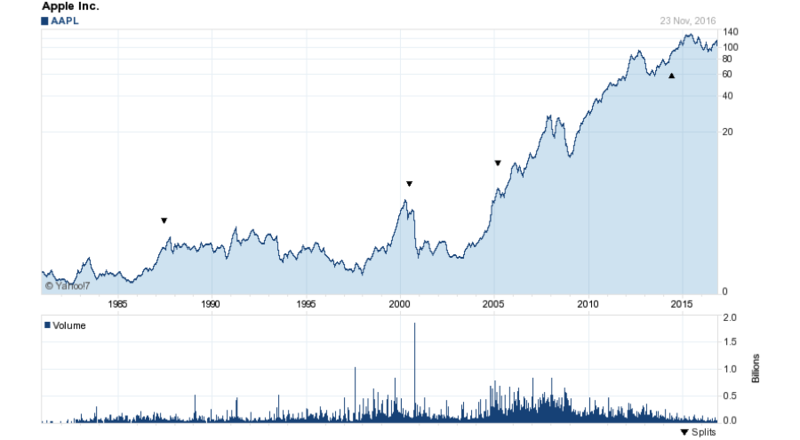 TiVo advertised outside in by simply telling what it did while Apple was a classic inside out giving us a reason to relate to the why.

Senek says TiVo was a quality business and was well funded but it’s been a failure and it wouldn’t have been if it had come to market with this: “If you’re the kind of person who likes to have total control over every aspect of your life, boy do we have a product for you! It skips commercials, it pauses live TV, it memorises your viewing habits, etc.”

What you do serves as the proof of what you believe but Senek argues the 250,000 people who turned up to listen to Dr King weren’t there for him but they were there for themselves because they believed in what he believed.

John Maxwell, a man I often talk about because his book, 21 Irrefutable Laws of Leadership, is an absolute ripper and I MC’d John around Australia when he was here from the US, shared a great story of leadership and belief.

When he was a young boy he asked his dad for pocket money for doing chores. His dad said no arguing that he believed that all the family members did chores to help out the family but he said he would pay John to read books.

As a consequence he and his dad would read books together and then they would talk about it and he then would get his money.

John said when he flying to South America as a 21-year-old he was reading Forbes magazine and they listed the top 21 most influential books of all time and he said because of his father’s belief in the importance of books he had read all of them!

John is now one of the most sought after and well-paid leadership speakers in the world!

When leaders talk about their beliefs they create the opportunity for others to buy into those beliefs.

Muhammad Ali was big on belief and this is one of my favourite quotes and I know I often use it but its relevance to success can never be underestimated: “It’s the repetition of affirmations that leads to self-belief. And when that belief becomes a deep conviction things begin to happen.”

Given what Simon Senek has succinctly explained about the importance of selling beliefs rather than what you do, imagine what could happen if you were selling deep convictions!

I really hope Malcolm Turnbull gets to read this one – our country really needs a belief-seller.

Great leaders inspire action and that’s something we all should aspire to.