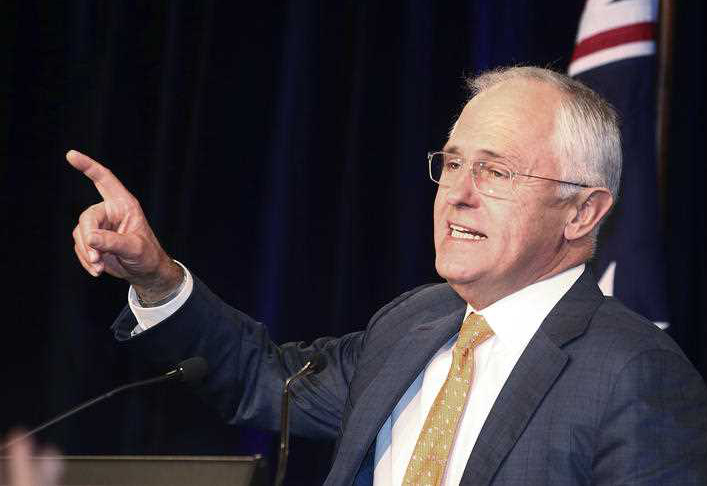 Why didn't Malcolm point to the economic scoreboard?

A Brexit reality check arrived in the UK and Europe with their stock markets down around 0.7% overnight. It was not a jolting wake up call to what has happened, but it ended the positivity that came out of central banks promising to keep stimulating their economies to offset any Brexit bad effects.

It was this that helped our stock market ignore Saturday’s kick-in-the-pants election result for the Coalition first, and major parties second, as the electorate collectively said: “Not happy Malcolm.” And even though Bill Shorten did better than the bookies expected, both Labor and the Greens are less popular in terms of primary vote support.

The Senate tells the story where the feral lot from the past Parliament, which was described as the bar scene from the fourth Star Wars movie — ironically called A New Hope — actually got bigger and possibly crazier looking! I won’t name names in case I need to interview them for my TV show, as they’ve become really important to crucial economic policies from super, to reducing the deficit and even job creation.

The result, whichever way it goes, is very disappointing for Malcolm Turnbull, who arrived with so much hope! His personal popularity was stellar high and he induced a turnaround in both business and consumer confidence compared to Tony Abbott’s period in charge, but most of this evaporated in 10 months. Sure, his caving in to the right of his party would have lost him a lot of the ABC vote, who might’ve loved him in his brown leather coat days when he seemed like a leftie Lib, but he was always going to find it hard to keep these more Green and Labor-leaning types.

He and Scott Morrison lost some retirees and potential retirees with their inexplicably stupid super changes, which I warned them would come back to bite them. And it did.

By the way, those changes were economically responsible to help fix the Budget deficit challenge and to show here was a Government with the guts to put all Australians first over people who vote for them. It showed guts, but it was politically crazy.

On politics, Malcolm lost credibility talking about a GST and state taxes and then appearing to back down on the ideas. Even if they were just “on the table” considerations, the dumping of the ideas made him look wishy-washy and made Bill Shorten and Labor look more credible.

Economically literate, high-income earners and those paying company tax would see the sense in a higher and broader GST, but normal people only see more hip pocket losses.

The lesson from the Malcolm madness is clear — all the responsible economic policies really require a great salesman who can really talk to, listen to and get through to the average Aussie. It’s a problem for the Coalition that the country’s latest conservative expert, Andrew Bolt, is headlining that Turnbull should go and Tony Abbott has to come back.

Tony can’t sell the policies as a Prime Minister, but was excellent as an Opposition leader flogging border security, no mining taxes and no carbon taxes, but he also promised economic competency to KO our deficit/debt problems.

And this is where he failed, though he wasn’t helped by a Senate that said ‘no’ to many of his tougher reforms. Also, it didn’t help that he simply wasn’t good at bringing people along on a journey of optimism. He wasn’t up to the toughness that being a Prime Minister of this crazy country has become. If you don’t believe me, then you need to ask Kevin Rudd, Julia Gillard and Tony himself.

Jamie Briggs, the Lib who lost his SA seat of Mayo, says we’ve become “ungovernable” and of course he’s wrong, but we have become harder for a variety of reasons. However, the simple facts are that the current crop of leaders is lacking charisma and vision, as well as an ability to sell.

Malcolm kept talking about the really important message of jobs and growth, which I encouraged them to do way before the election campaign, but they turned a great economic story for Australia into a slogan by repeating “jobs and growth.”

The PM should have been pointing to our economic scoreboard every day and should have posed the question: “Do you want to risk all this by voting in Labor?”

Our economic story, especially on an international comparison basis, is great and that should have been held up as something you don't want to lose.

What could Malcolm have talked about? Try these:

Yes, I know numbers can be boring, but when they all scream our economy is damn good, the follow up question is: can you trust Labor not to screw it up?

You might doubt the sexiness of economics, but the Compass poll on the ABC consistently showed the economy was the most important voter issue. The story is, and was, important but it needed a good seller, someone who could prick the conscience of all those Aussies who care about other issues from climate change to same sex marriage to immigration to lock out laws. Yep, young voters care about such things and a great salesman knows what his potential customers care about and his sales pitch hooks up with these concerns.

I don’t want to go on about how good our economy is compared to most countries but it’s an important story that didn’t get a look in over the course of the election campaign.

Jobs and growth are really important, but Malcolm needed much better selling skills and it was this that has come back to haunt him, the Coalition and even the country, as we wait in limbo election land.

So who do we need? We need a politician with the down-to-earth charm of Barnaby Joyce but he or she would need to be a little more sensible. Barnaby gets the average person and is quick at times but he can lack a bit of depth when it comes to the higher order matters of state.

His battle with Johnny Depp and his dogs was Barnaby at this best but in some other issues of importance he hasn’t always covered himself in intellectual glory.

The possible hung parliament ahead tells us we need a damn good political leader and he or she needs to show up before the next election or else Prime Minister Bill Shorten is our fate. Bill, of course, is OK, but we desperately need better than OK.

One final thought. I hope the Senate we have elected doesn’t help ruin the good economic story. If the new bar crew of the Senate stops Budget repairs, our triple-A rating will go and we’ll all be paying higher interest rates and job losses will follow.

That’s when the weirdoes, who voted for weirdoes on Saturday, will get their comeuppance. This is why I argue the economic story is so damn important.