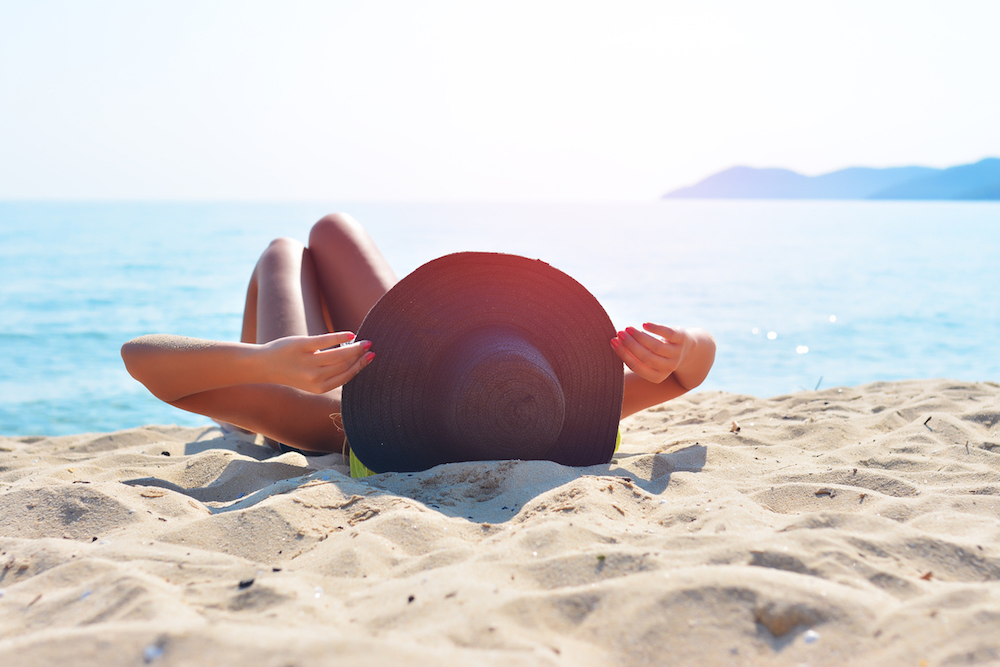 Why can't we enjoy low interest rates while they last? Forget fear!

I’m sorry that I have to write about property prices again but I do feel compelled to give the other side to the story that’s being pedalled by the media and some economists. Today, following the 22nd time the Reserve Bank has met and left interest rates on hold, there are references to a house price slump and the possibility that the next move on rates will be down, not up!

It’s become fare that the media loves to gobble up because they think it sells newspapers and attracts eyes to their ‘important’ stories.

And they might prove to be important stories but right now they’re nothing more than speculative stories. Two big watch issues make it possible for this fear and doom tale to be told that the house price fall might be scarier than you think and that the RBA will be forced to cut rates.

You know there are grounds for being a little spooked when a reasonable economist like AMP Capital’s Shane Oliver says that the RBA might be wrong about the economy and that the next move in rates might be up in 2020 or it could even be a cut!

However, even the SMH, which is the country’s best flogger of scary real estate stories, reports that “HSBC chief economist Paul Bloxham predicts  an increase in the second quarter of next year, ANZ’s head of Australian economics David Plank forecasts at least one in the second-half of 2019, and Capital Economics chief Australian economist Paul Dales points to a higher rate in “late 2019”.

Sure, Shane isn’t alone and Westpac’s Bill Evans has been saying 2020 for the first rate rise for some time. But it doesn’t mean that they will be right.

Economists do their best job to guess the future but after 33 years of reporting what they say, I know these guys can change their forecasts and not even lose a night’s sleep! Forecasting is a tough job but someone has to do it!

Last Friday I went to one of the country’s most respected property watching groups — BIS Shrapnel — which has recently merged with Oxford Economics to form BIS Oxford Economics.

I asked the MD, Rob Mellor, whether we should be worried about prophets of doom, with predictions that house price falls could be as bad as 20%?

He said he was expecting an average fall of 5% this year, given the current national drop in prices is 4% and probably 3-4% next year. However that’s in the context of cities like Sydney and Melbourne having house price rises of around 50% over five years. If you go back to 2011, the rise is even greater or crazier, depending on your view of life.

This chart from Greg Jericho in the guardian.com shows Sydney’s established houses have spiked over 80%, while in Melbourne it was over 60%. 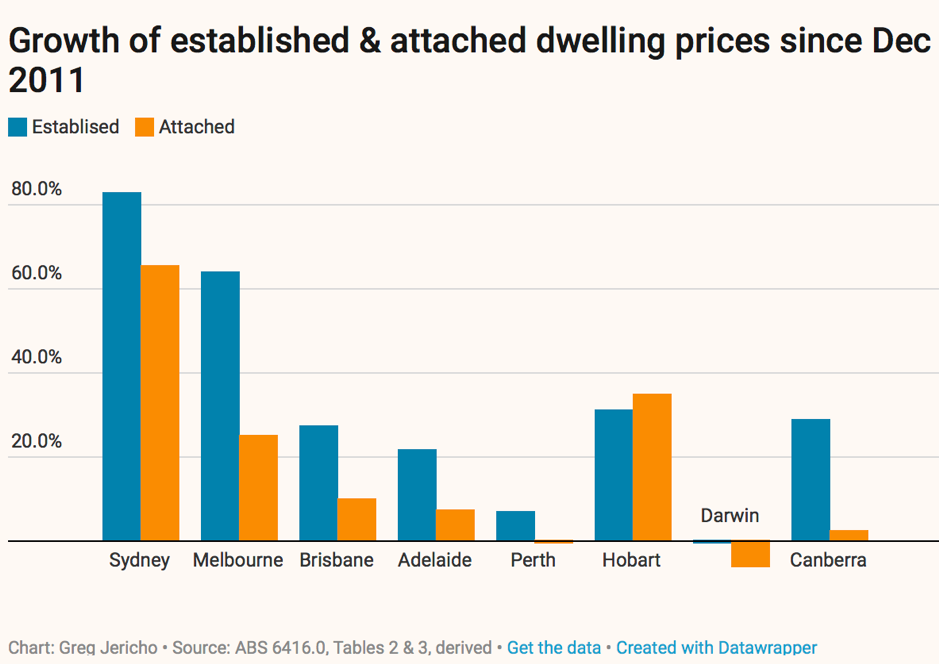 So a pullback is overdue, but at least an expert like Rob Mellor isn’t looking for razor blades predicting an end to housing happiness. For me, home owners from 2011 were lucky while buyers over the past two years might have paid too much, if they want to sell soon. But in 10 years’ time, they will feel better about their purchase.

So these Aussies will feel unhappy hurting consumer confidence but other Aussies will be happy to be able to buy a house in a falling market, and these will be buyers who then will renovate their properties and help the economy.

If the price fall is 10-12% over a couple of years and concentrated in Sydney and Melbourne, as wage rises kick in (which is expected), then this house price fall doesn’t have to be a disaster.

Our economy is growing at a 3% rate, the budget deficit was falling, employment was at record highs, unemployment is falling, our trade balance is in a strong surplus and the overall economic story is really strong.

This economy can take a house price fall, with business investment strong. And this week we saw job ads at a near seven year high and construction expanding for 18 months in a row.

A lot of this is low inflation, stopping the RBA from raising interest rates, because of the likes of Amazon, Uber and other digital businesses that have competed price power out of many businesses. Everywhere we turn, prices are being forced down by either new online businesses or regulation and it explains why wage rises have been slow.

We are living in an age of low inflation. We should just enjoy it because 20 years ago we were all stressed out about high inflation and high interest rates.

The chart below shows how crazy our house price rises have been: 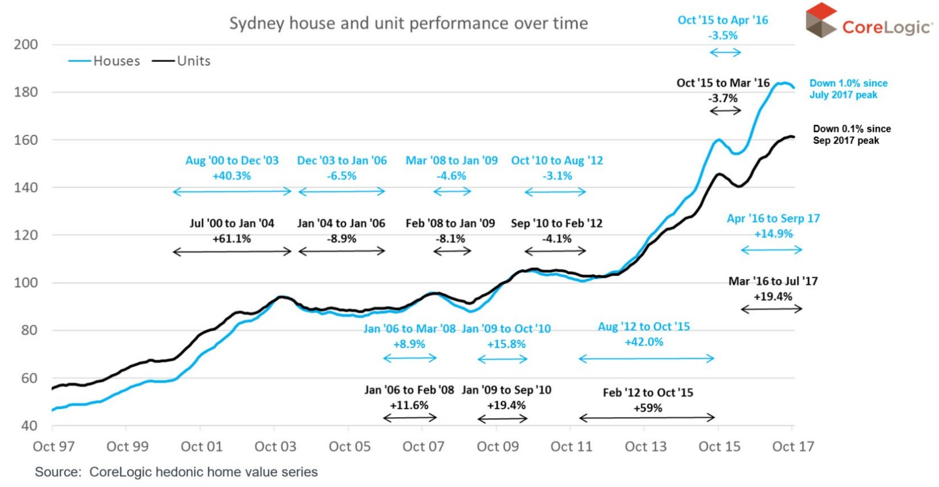