It is said that Americans tend to be the “glass half full” type of people, whereas most Aussies are “glass half empty” types. In reality, some Americans are probably more “glass overflowing”. So, does this sweeping characterisation of Americans as optimists and Australians as pessimists in any way explain the appalling performance of the Aussie stock market relative to the US and other global equity markets?

Stock market theory says that as share markets should go up over time, they will take out previous highs. Whereas the US market has sailed through its pre-GFC high set in 2007, the Aussie market still sits some 1,400 points short. Some underperformance!

So, why the underperformance? A sixty four dollar question indeed! Here's my take.

Firstly, let’s look at the composition of the two markets. The graphs below show the breakdown on the two markets using the GICS system of classification which assigns each company to an industry sector. 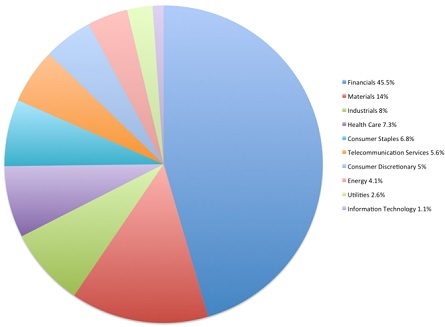 The Australian market is heavily concentrated, with the two largest sectors, Financials (dark blue) and Materials (red), making up almost 60% of the market capitalization. In contrast, these sectors in the USA make up a combined 18.5%. 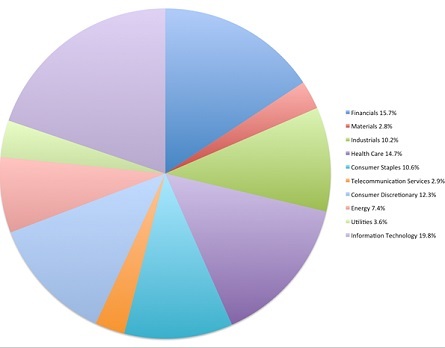 Not only are the companies more evenly spread across the sectors in the USA, but some growth sectors, such as Information Technology (lavender), Healthcare (purple) or Consumer Discretionary (light blue) dwarf the comparable sectors in Australia. For example, IT makes up 19.8% of the US market, compared to a tiny 1.1% in Australia. We simply don’t have the Microsofts, Facebooks, Apples or Alphabets to power our market!

With the commodity boom over, pressure on banks to increase their capital, and an under representation in healthcare and IT, it is perhaps not surprising that the local Aussie share market hasn’t recovered as quickly as the US market.

What about the strength of the two economies? Well, if you look at growth in GDP over the last five years, it suggests that the US economy has done better than the Australian economy. The following chart from Trading Economics shows the Australian (blue) and US (black) annualised GDP growth rates.

Stock markets aren’t always rationale, nor are they necessarily representative of all the corporations that make up the overall economy. But over time, you would expect some form of correlation between GDP growth and company profits, and as result, share prices.

Prima facie, I think you can make the case that the US economy has been growing at a faster rate and this has helped their market to perform more strongly.

And dividends? This is an important part of the puzzle because typically, Australian companies pay a dividend rate that averages around 4.5% pa, whereas in the US, it is more like 2% pa. Simple price indices like the S&P 500 or ASX 200 don’t take into account income returns, so when we look at total return (or accumulation) indices that include dividends, a slightly different picture emerges. Over the decade, the total return from the S&P 500 has been 109% compared with 64% for the Aussie market. Still in front, but not by the same extent measured by the price indices (69.4% compared to 6.2%).

But despite these factors - market composition, economic growth and adjustment for dividends- I still have the sense that a pervasive negative media, innate pessimism a focus on the “glass half empty” issues has had some sort of effect. When we stop talking about “billions being wiped off the market”, or balance this when it rallies with “billions being wiped on”, our market will do better. If Aussie were like Americans, I reckon we would be a lot higher.