When it comes to stocks, I will turn negative one day, but now is not the time! Here are a few reasons for believing in the power of positivity.

Why being positive generally (and on stocks) pays off

At times, critics show up who want to get stuck into me for always being positive. Their argument is often that stocks are poised to slide and my public positivity is misleading my viewers, listeners and/or readers.

Of course, they have their right to disagree with me and let me know why (though I do think sometimes their occasional nastiness masks some greater loss or problem in their lives).

Deep psychological issues aside, I’d like to give you a few reasons for being positive.

Harvard researcher, Shawn Anchor, who has had one of the greatest downloads of his Ted Talk on YouTube, actually says being happy and positive gives you an advantage. I only learnt of this recently but I was glad that his research confirms the good sense of my general positive approach.

US President-elect, Donald Trump, says if you want to think, then he prefers to think big! I say if you have to have an attitude, why not have a positive one that makes you look for opportunities that could vindicate your optimistic approach.

I’ll run with that as I’ve always thought a negative person achieves little. They tend to breed negativity, while positive people do the reverse, though they do annoy committed cranks!

The history of stock markets going back more than 100 years shows that over a 10-year period, a portfolio stocks that produces returns close to the All Ords will deliver 10% per annum over a 10-year period, despite big sell offs and crashes. In about eight out of 10 years, the market goes up, which is another reason to be mainly positive.

My favourite chart of the stock market between 1970 and 2009 (the year after the GFC crash) shows that, despite heaps of crashes and corrections, $10,000 invested (and rolled over with its dividends included) snowballs into $453,165, which is a return of 10.3% per annum.

Check out the chart below for Australia. Note how the negative crashes and corrections quickly get offset by positive market rebounds. This shows it pays to be positive. 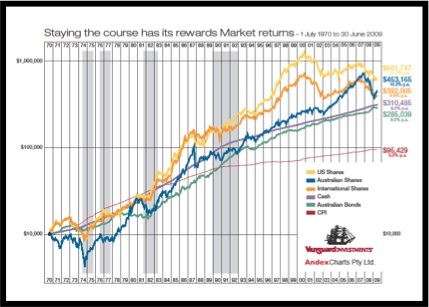 Have a look at our economic growth record, particularly just after our bad reading this week for the September quarter. The result was minus 0.5% but we’ve had only four negative quarters since 1991. Therefore, in Australia, 96 out of 100 quarters have had positive growth rather than negative growth. More importantly, we haven’t put two in a row negatives together since 1991. This means we haven’t had a recession since then. We even avoided one during the GFC, which was a great triumph for positive policies from Aussie governments since the mid-1980s.

Admittedly, recent governments have been less inspiring, as leadership issues have dogged the country, but we have still kept on growing.

When it comes to stocks, I will turn negative one day and I’m always looking out for a good reason to be objectively negative. But now is not the time.

Of course, I won’t remain negative for long because history shows that after a crash, there’s often a pretty hefty rebound.

In 2009, after March, the market surged over 30% for the rest of the year. And look at BHP Billiton this year. It was creamed and written off in January and February and it’s now rebounded about 85% in less than a year!

I’ve been a buyer of quality real estate for over 30 years and despite the odd rough patches, they have a great habit of returning powerfully positive results.

There’s no way you’ll ever see me give up on the power of positivity. You can be positive about that!

For the record, here’s my list of positives ahead: