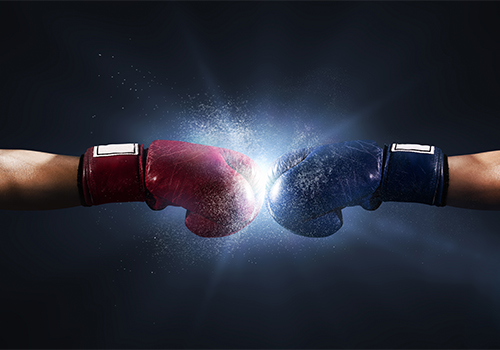 Who won the property price punch up?

The “property punch up of the century”, aired on my TV programme Money Talks, has come and gone and while I think the viewers should decide who won, I know I can’t wimp it and not give the referee’s decision. In boxing, the two ringside judges’ scores are tallied up with the referee, if both fighters are still standing.

Of course, the ringside judges can see it differently to the referee, so I don’t think my call is final. But given the fact I was also the ‘promoter’, my view should be put out there.

Both combatants were worthy opponents and John Adams (Chief Economist, Good as Gold Australia) initially built up a good case with his worry about the total magnitude of our debt. And in my final wrap up, I made the point that if a significant global recession happens, then we could experience some serious issues.

Christopher Joye, founder, Coolabah Capital Investments, also conceded that point but the whole scenario rests on a “what if?” circumstance.

In a nutshell, John Adams says we’ve never had a debt problem like we have now. Many would dispute this but that doesn’t mean he’s wrong. He shows that it’s worse than 1892, which was the Depression before the Great Depression of the 1930s.

However, macroeconomic management in the 1890s and the 1930s wasn’t as interventionist, globally cooperative and as sophisticated as it is today, and John admits that his worst case scenario has to result in a massive fall in house prices. He says if Government intervention stops house prices falling by 40% or more, then overseas lenders could take a set against us and the dollar could slump.

Either way, he sees we can’t get out of this debt-fuelled house price pickle. He does have six scenarios that could happen if we face a debt day of reckoning and while that is intellectually interesting, most normal people want to know what the most likely thing to happen is.

Knowing that means you can take actions. When Steve Keen told people that house prices were going to fall after the GFC, some people sold their property. Others ran away from the stock market and went to the safety of term deposits and cash.

They lost out. Today, many supporters of John would have positioned themselves for the coming disaster to be of Harry Dent proportions. They could be right, as John says, these debt dramas play out over 20 years not 10 years.

I thought Chris Joye’s killer punch was on debt servicing. This wasn’t an area where John looked strong in the debate. Joye showed a chart from economist Alex Joiner at IFM Investors, which showed that houses in Australia are actually cheap, given our income growth and where interest rates are. The chart below graphically shows what Chris based most of his arguments on. 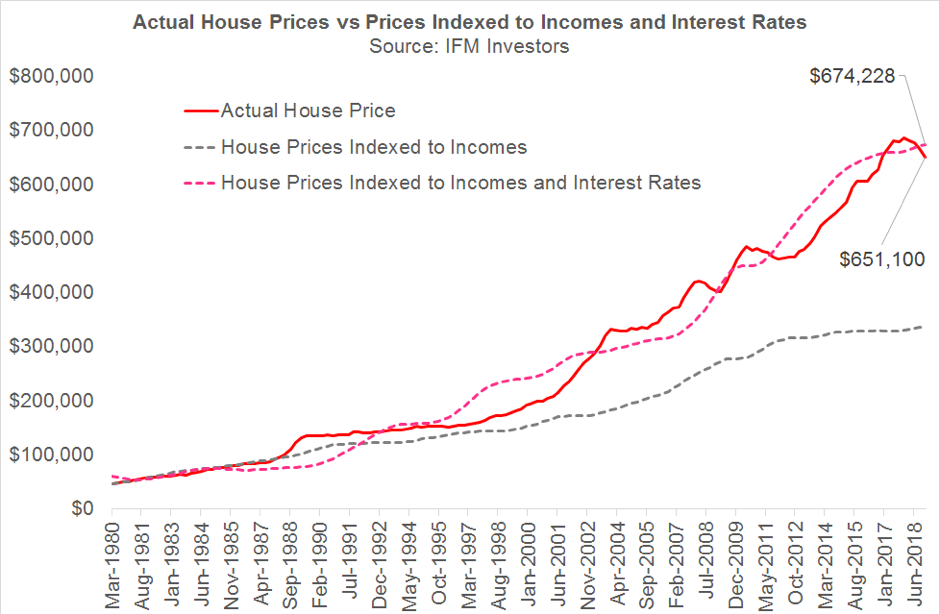 Joye says ability to service a debt is more critical than the actual size of the debt, which is why BHP can borrow more than Bellamy’s.

When it comes to debt and house prices, comparisons with Ireland have always bothered me. Our economy, our banks’ credit ratings, our Government finances and many other differences has always made me think, like Joye, that it’s not an appropriate example to cite.

A US comparison would be better. Maybe even a UK one. But none of the “debt bubble will get us” mob ever give us an example of house price collapses in the Old Dart.

I think Joye confidently batted off most of John’s points and was a better debater but that doesn’t mean that he’s more right. Some might call it a knockout to Chris but I’d make it a points decision by a healthy margin.

Our Government has a AAA-credit rating, our big banks are in the top 50 in the world, and unlike lots of country’s overseas a big proportion of investor loans in property are actually held by mums and dads, who are better risks than companies that can go broke and walk away from bank debt.

I was prepared to be scared by John Adams’s analysis and would have changed my view. But following the debate, I’m still comfortable with our economic position and how much house prices will fall by.

If a global recession takes root, I could be wrong but investing and buying valuable assets are always a gamble.

One last point in relation to John’s reference to a book written by Peter Brain and Ian Manning called Credit Code Red. This was important enough for John to bring up and show in the debate.

I’m keen to read it but I do recall the academic Peter Brain. Pete has been in the ‘crash and burn’ economy game for a long time and I guess one day he will be right.